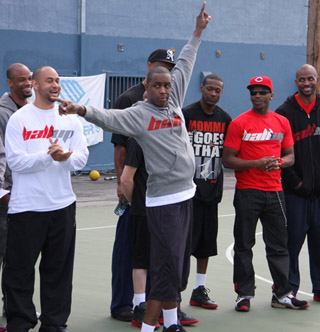 When I woke up Sunday morning, I couldn’t believe I actually needed to pull out my sunglasses. I mean, my jacket was still drying from the monsoon that hit Los Angeles right before All –Star Saturday night (… and Friday… and Thursday). It was gloomy and cold and I was starting to doubt that I was really in L.A.

It had to have been some miracle that the sun was actually shining.

But it was really just iHoops’ Neil Dougherty.

“I’ve been teasing everyone saying that I stopped the rain today,” said Dougherty, the organization’s director of athlete and coach programs. “Took a lot of effort but it was worth it.”

Dougherty wasn’t only pleased that the weather cooperated with him Sunday morning for the iHoops basketball court dedication at the historic Challengers Boys & Girls Club, but he was just thrilled that everything came together so smoothly and that parents were there for support.

“I am very happy with the turnout. To see so many kids here is one thing, but to see so many adults here, that’s where the secret is,” Dougherty said. “Because they begin the giving back process and that’s what makes it grow. It’s for the kids, but the adults have to do the legwork and keep this process moving.”

Kids anywhere from seven and up lined the courts in their green, purple and blue Boys & Girls Club shirts. On one end, they were shooting the ball around on their battered basketball court and taking shots on a rim that wasn’t very sturdy. On the other end, dancers from the Entertainment League’s dance group, the E Kidz were practicing for their performance.

You could hear chatter from all of them, however.

“Is Justin Bieber going to be here?” one girl asked me. “Just tell us!” another yelled at me. One 11-year-old girl told me that if Chris Brown was really coming, she knew exactly what she was going to do first: kiss him.

These were kids that spent a lot of their time together at Challengers, a facility that Dougherty says is one of the most unique he’s ever seen. Not only was there the historical aspect—Lou Dantzler opened that location as the first Boys & Girls Club in 1968—it also had an education component, taught them about dentistry and had a kids-run radio station that played throughout the community.

It was pretty cool seeing celebrities like Superman’s Brandon Routh, Gran Torino’s Cory Hardrict, NBA vet Felipe Lopez and the guys from the Ball up Streeball team out there bringing the game of basketball to these kids. The overall consensus was the same among the guests, parents, and the people who put on the event: it was important.

“It’s great to have opportunities like this especially in the city of Los Angeles where there are so many other threats of negative impact,” Routh said. The Boys & Girls Club is an amazing organization, one of many that’s helping to give kids something to do after school, which is what we need to do when their parents aren’t able to.”

Streetball legend The Professor took to the court helping teach the kids the fundamentals of ball handling—something he’s obviously mastered.

Chris Brown even got in on the action. There was a swarm of kids following him around the court. He took pictures, signed shirts, cell phones and pieces of paper, gave out sweatbands and even played some basketball with them.

The only thing he didn’t do was dunk like he said he could. The guy tried, but he should probably just stick to dancing. The guys from Ball Up were especially proud to be there. Playing on worn out courts is all too familiar for them.

“It’s really important because a lot of guys start from the court. [For] streetballers, this is where it starts from right here,” Ball Up’s Up In The Air said. “I think any basketball player starts from the courts. “

It wasn’t just about trying to get a picture with Chris Brown or learning how to keep control of the ball while dribbling, it was more about giving the kids something to look forward to and an extra boost of confidence that people care about their future.

“It couldn’t have come together any better,” Dougherty said. 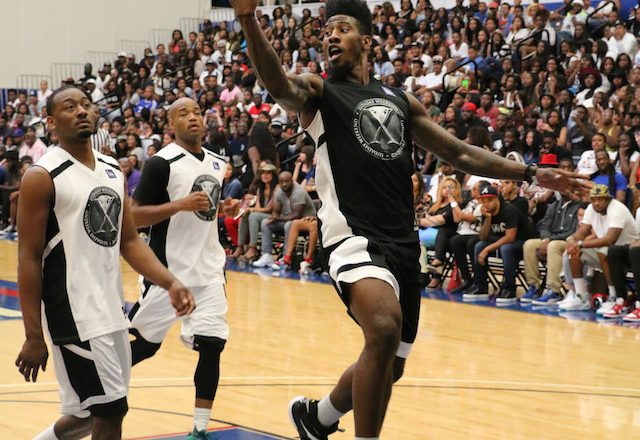 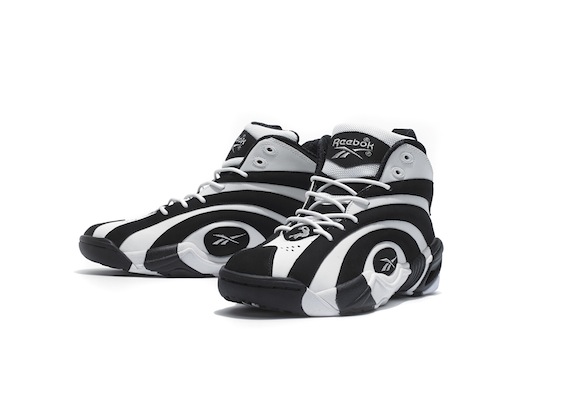 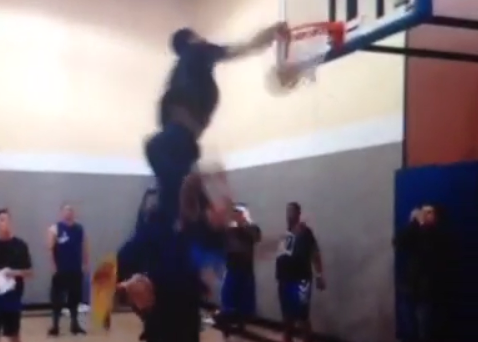 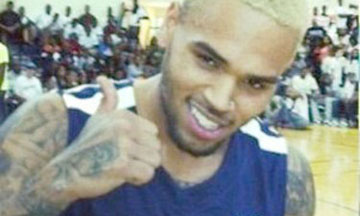