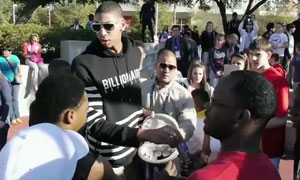 While in Houston for his first All-Star trip, Anthony Davis allowed the cameras to join him on his adventures. In this behind-the-scenes video, you’ll see Davis with his guard down, spending time with family, stopping for some famous Texas BBQ, signing autographs for fans and even squeezing his 6-10 frame into a Red Bull Wings Team Mini Cooper. On a side note, watch out for the Blake Griffin cameo—he’s gone almost as soon as he appears.