Video: It Was Goaltending, But Who Cares? 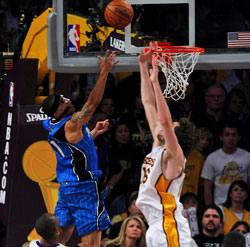 And we’re going to remember how he missed.

L.A. Times beat writer Mark Heisler’s heart skipped some beats — along with the rest of the Staples crowd — when it appeared the Magic had the perfect play:

For a moment at the end of regulation, it looked as if it was about to be a 1-1 series, as Hedo Turkoglu’s inbounds lob sailed over Kobe Bryant to Courtney Lee, going in for the game-winning layup.

Fortunately for the Lakers, tragically for the Magic, Lee had to reach back, and adjust, and, as Chick Hearn used to say . . .

Yes, Pau Gasol grazed the rim in the final milliseconds of regulation. By the book, it’s goaltending and the Magic should have won the game. But with the circumstances (the kinetic energy, the noise, the excitement, the stakes) as well as the results (Lee clunked the lay pretty bad), is there any way the game should’ve ended by the books?

As far as I know, the officials barely reviewed the final play, if at all. And I’m happy about it. To me, an ending decided after four minutes of referee video scrutiny doesn’t seem right, especially in the NBA Finals.

Where’s the Amazing in that?