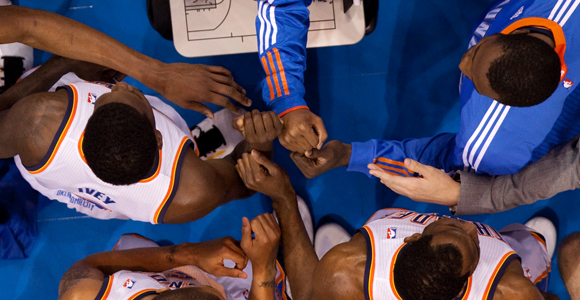 During his tenure in Boston and under the tutelage of Doc Rivers, Kendrick Perkins was taught the philosophy of ‘ubuntu’: an African ideology that underscores the importance of unity and working together to achieve success.

After the Thunder lost to the Memphis Grizzlies in Game 1, Perkins encouraged Kevin Durant to gather the team and watch the game tape together. A players-only meeting to discuss what mistakes were made and how to correct them.

Judging by the way the Thunder played the Grizzlies last night, the meeting paid off.

“Durant took Perkins’ suggestion and arranged for a players-only dinner at his house on Monday night. The team dined on a Thanksgiving-worthy spread prepared by Durant’s personal chef and watched every minute of OKC’s disheartening loss to the Grizzlies. The players stopped the video at times to discuss specific breakdowns. By the end of the evening, they were in agreement on what needed to be done to improve.

They must have been right, too. Twenty-four hours later, the Thunder walked off the court at Oklahoma City Arena with a series-evening 111-102 victory. At least a few of the Thunder thought the seeds for the victory were planted at their clear-the-air, players-only meeting, the team’s first of the season.

‘Perk did it,’ Durant told Yahoo! Sports. ‘He wanted us to do it, and everybody listens to Perk.’”

Saturday’s Game 3 will be ripe with emotion as the Grizzlies look to bounce back in their return to Memphis.

With Perkin’s filling the role of elder-statesman for the Thunder, it will be interesting to see if the Grizzlies, led by the bruising but untested bodies of Z-Bo and Marc Gasol, can find an answer to Oklahoma’s adjustments and continue their surprising Playoff run.