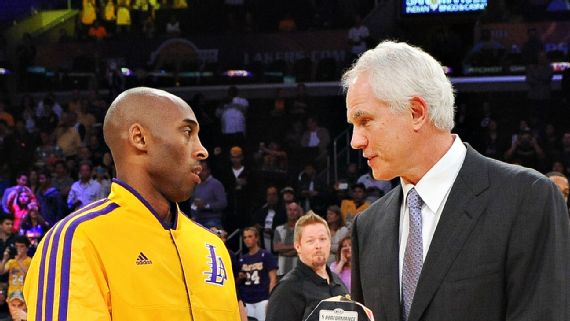 Kobe Bryant’s retirement didn’t come as a surprise to Los Angeles Lakers general manager Mitch Kupchak, though the timing of the announcement caught him slightly off guard.

Kupchak admits that it has been difficult to executre the team’s rebuilding while at the same time catering to Kobe in his final season.

Mitch has been around for Bryant’s entire 20-year ride in Purple and Gold, though he wasn’t in the building for The Black Mamba’s first game due to the birth of his son.

On his reaction to Bryant’s announcement. […] Kupchak: “I’m not surprised. The surprising part about this is that he made the announcement today. My understanding all along was that this was going to be his last year. Certainly there’s been speculation, and this puts an end to any speculation that he may come back for another year. But it was my understanding all along.”

On why he thinks now was the right time for Bryant to do this. […] Kupchak: “We didn’t make it easier for him with the group we have on the court, and that’s not to say they’re not a talented group of players. But they’re certainly young and unaccomplished. And at an advanced age, I think we witnessed that it’s difficult to play this game. He’s certainly struggled to play at a tempo and pace that I think younger players and the game is playing today. I think under a certain system with motivation to contend, it might have been different. Maybe he wouldn’t be as frustrated — I shouldn’t use the word ‘frustrated,’ because I don’t know if he is frustrated or not. I don’t think the game would be as hard for him as it appears it’s been for the last month.”

On balancing playing Bryant and allowing the young core to develop. […] Kupchak: “It is awkward. It’s awkward, but there’s really no other way to go about it. When you have a player of Kobe’s caliber that wants to continue to play and you think he can play at a high level, you’re gonna let him play until he no longer wants to play. Yet, it’s clear that we had to begin the process to rebuild the team. We were hopeful that we would get off to a better start this year. We think we added a couple of veterans along with a bunch of young players. I thought that we would be better than two wins into the season. That’s not to say that we would be on pace to win 60 or 50 games, but I thought we’d be a little bit better. Clearly we’re not playing at the kind of level that a player of Kobe’s age and experience finds challenging. Kind of like there’s no light at the end of the tunnel. So I’m not surprised that he would make the announcement now. I think the game will be easier for him now. I think he’ll be able to enjoy the rest of the season. We haven’t had a chance to huddle up to see if we’ll use him any differently in terms of minutes. I don’t think that’ something that’s going to be decided today. But since he has made it clear this is the last season for him, I think it’ll be more enjoyable. And I think people will appreciate what he’s accomplished — not only in our building, which has always been with loads of love — but I think even mores so on the road.”