Lakers to Run the Princenton Offense Next Season 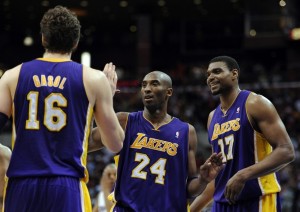 In 2012-’13, the Los Angeles Lakers will be a significantly different-looking team from the one that we saw last season. Not only is Steve Nash the new point guard in Tinseltown, but the Lakers are also implementing a different offensive scheme.

After Kobe Bryant suggested the change over the summer — and with the aid of Eddie Jordan, who is expected to be hired as an assistant coach by the Lakers — the legendary Princeton offense is making its way into head coach Mike Brown’s playbook. Bryant seems to believe the tweak will be a highly beneficial thing for his squad.

Per the NY Daily News and Yahoo! Sports:

Bryant broached the idea of changing the offense with Brown three weeks ago in Las Vegas because “I thought it could be something beneficial to us. To his credit we sat down and talked about it. We all agreed that this could be something that could really help us.”

At 33 years old, Bryant needs edges this season, and the prospect of returning to the discipline of an offensive system in the post-Phil Jackson era holds appeal. “It’s a great offense,” Bryant said. “It’s exactly what we need. It takes us back to being able to play by making reads and reacting to defenses. It takes a great deal of communication, but that’s where we’re at our best: Reading and reacting as opposed to just coming down and calling sets. Calling sets make you vulnerable. There’s so many threats, so many options, it’s very tough to defend. Against the type of defenses that teams play nowadays, they load up on one side and are constantly coming with help from the weak side. The Princeton offense makes it very, very tough to lock in on one particular player. From my experience, those types of principles – ball movement, changing sides on the floor, everybody being involved – those are championship principles. That’s championship DNA.”

Kobe Bryant is particularly excited about how this new offense for the Lakers could help get Pau Gasol’s groove back. Bryant claims that Nash’s playmaking coupled with the Princeton scheme are right in Gasol’s “wheelhouse”.

These are desperate times for the Los Angeles Lakers — with an aging and very expensive core — and that calls for dramatic, sweeping change on all fronts.

It remains to be seen, however, if any of this will result in a return to NBA championship contention.