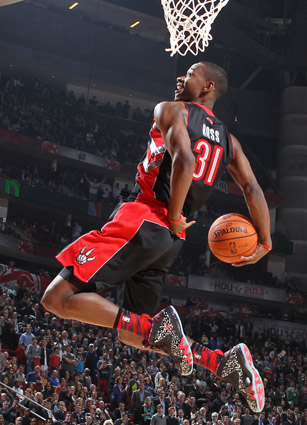 HOUSTON — YO! Lang Whitaker here — remember me? I’m liveblogging tonight’s All-Star Saturday Night festivities. Who will win the Old Players Shootout? Who will dunk less worse than everyone else? Tonight we find out!

• The evening begins with a special musical performance by Ellie Goulding. All I know about her is that we can’t see her because the media seats are basically directly behind the stage, and the monitors on the tables are all tuned to a stats feed, so we can’t watch it there, either. All we can see is the back of a huge lighting rig. The hope is they move it before the stuff actually starts. Otherwise I’m reduced to a bunch of jokes about what the back of a lighting rig looks like. And we can all probably guess how hilarious that will be.

• Tonight’s in-arena host? Nick Cannon. He begins by explaining that everything about this evening “is a beautiful thing” because both the East and the West are playing for charity. We haven’t really discussed this, but the whole East v. West gimmick has some promise, although all the players actually like each other.

• Chris Paul says the East team looks “terrible,” and the crowd reacts with surprise. Maybe they don’t like each other?

• And we’re off! The Shooting Stars is sponsored by Sears. Haier is now Lower.

• First up, Team Harden. 37.9 The best part is that they’ve gone with jitterbug jazz music as the in-arena soundtrack. Not that far a leap to just using the Benny Hill music. Which would be dope.

• Now we have Team Westbrook. Should probably tell the in-arena announcer that Robert Horry isn’t crazy about being called Big Shot Bob. (“My name is Robert,” he once told me.”) Team Westbrook does it in 29.5.

• Team Bosh goes third and finishes in a whopping 50 seconds. Maybe not a great idea to have Dominique shooting the threes.

• Finally we get team Lopez, which includes Muggsy Bogues, and somehow they finish even worse than Bosh, at 1:07.

• Somehow the West gets 20 points for that. The scoring for the East/West stuff at All-Star Saturday seems more arbitrary than the house cup scoring at Hogwarts.

• Oh, now we have Finals of the Sears Shooting Stars. Team Bosh from the East really stinks it up and finishes in 1:29.

• LOL. Team Westbrook makes everything and gets to their final shot with like one minute to make a halfcourt shot for the win. And they can’t. Shots fly over the backboard, rim out, bounce off the glass, hit nothing but air…and they lose.

• During the break following the Shooting Stars, several members of Team USA (men and women) are introduced and presented with rings. Pretty sure they already received gold medals, but whatever.

• Now we move on to the Taco Bell Skills Challenge. Jeff Teague finishes in a slow 49.2. Brandon Knight almost halves Teague’s time and finishes in 32.2. Finally, Jrue Holiday finishes in 29.3.

• When Holiday finishes, a loud Taco Bell sound rings out through the arena. For whom the Taco Bell tolls!

• Nick Cannon interviews Jeremy Lin and asks for the key to winning the Taco Bell Skills Challenge. Lin says not missing all his jumpers. That Harvard education at work.

• Tony Parker misses a bunch of jumpers and finishes at 48.7. Which of course means the East is awarded 30 points! I’m pretty confused right now.

• Well, apparently the Skills Challenge isn’t over. Jrue Holiday goes again and finishes in 35.6. The Dame Lillard returns and finishes in 29.8. Team West is given a 984-point bonus!

• THREE-POINT CONTEST! I’m going with Detlef Scrempf as my favorite.

• The East comes around and Kyrie opens with 18. Paul George follows and goes for just 10. Steve Novak comes up and has to get 27 to tie. Starts strong and then cools off for just 17. Not enough. West wins and gets a bonus of 443,229 points.

• Now for the Finals, we get Kyrie against Matt Bonner. Kyries starts out red hot, and finishes with 23. Bonner finishes with 20. We all know what that means: 400,000,004 points for the East!

• Judges include Rudy Tomjanovic, Dikembe Mutombo, Yao Ming, Hakeem Olajuwon, Clyde Drexler. I hope this doesn’t keep Mutombo from expressing his emotions like he normally does.

• Gerald Greene goes with a double-pump after a pass from Lance Stephenson off the side of the backboard. First try. 50.

• Flight White misses a free throw line dunk and manages to do a second dunk with his foot on the line, but with two hands. 45.

• Terrence Ross tries and fails four times to go around his back from left to right. Make that five times. Sixth time he gets it. 50

• Ken Faried gets a 360 off the backboard. He finishes with 39, in part because of a 7 from Mutombo. Deke keeps it real.

• Eric Bledsoe tries a 360 through the legs and misses four times. He finally decides to run up the left side, tap the ball off the board and reverse it. He also scores a 39.

• Jeremy Evans brings out Mark Eaton and seats him under the rim, then tries to basically do a double pump while snatching the ball from Eaton. He misses four times and finally gets it, to finish with a 47.

• James White misses a few crazy attempts and the clock runs out, and then they announce he gets one more attempt. And he misses that one, too. Final of 32 for him.

• Gerald Greene goes up and cuts out the entire net for his dunk. OK. He tries to dunk it right and then lefty a few times and can’t quite get it to work. He misses enough times that the clock runs out and he gets a final attempt, and that doesn’t work either. The judges give him a score of 32. And then he runs over and makes the dunk work. Of course.

• Best part of that thing was when he missed one dunk and the ball bounced over to the sideline, and 2 Chainz jumped up and grabbed the ball and made a nice bounce pass back to Greene.

• For the West, Ken Faried goes off the backboard, catches, goes through the legs and dunks righty. 50. Pretty nice.

• Bledsoe lobs to himself, two-hand windmills, and reverses. Bad man, there. 50.

• Evans runs up, does a 360 on the ground, and dunks two balls, barely. Gets a 43, which is enough to move him to the Finals against Terrence Ross.

• Finals: Evans dunks over a painting of him dunking over a painting. SO META. Best part of that dunk was Mutombo’s reaction when Evans unveiled the painting—he cracked up so hard, like it was genuinely the funniest thing he’d ever seen.

• Terrence Ross does a 360 on a pass off the side of the backboard, while wearing a Vince Carter jersey.

• Evans jumps over a seated Dahntay Jones and soars a bit. Nice.

• Ross jumps over a ballboy and passes the ball through his legs. Heckuva finish there.

• And your 2013 Dunk Contest Champ, with 58 % of the vote, your winner is Terrence Ross! Congratulations Canada!

That’s it from…where are we again? Oh yeah, Houston. Catch you guys tomorrow night for the All-Star liveblog!