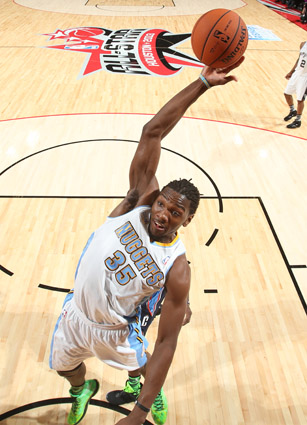 Heyo. We’re here live at Houston’s Toyota Center for the Rising Stars Challenge, in which Team Shaq is set to take on Team Chuck. A quick rundown of the teams:

Updates will be filed throughout the game—hit refresh and scroll down for the newest one. Let’s do this thing.

—Shaq’s leading some pre-game hype ceremony. His opposing coach seems to have ditched it, but Chris Webber is holding a huge Charles Barkley cardboard head in Chuck’s stead.

—And we’re off. Still no Chuck sightings. Kawhi Leonard opens it up with 2 points.

—Anthony Davis sinks a 3. And then Damian Lillard matches it with one of his own. Say it with me now: DE-FENCE!

—And yeah, as Ben mentioned in the comments, this place is weirdly empty.

—Gorgeous Rubio-to-Faried oop makes it 15-11, Team Chuck. So much offense.

—Kyrie seems intent on putting on a show, though his teammates don’t appear to be following his lead very well. His tricky dribbles are followed by passes to guys who get the ball are all like, “What??? Me????”

—Not very difficult to keep track of the adidas athletes on the court. They’re the ones wearing the super-bright green kicks. Solid sneaker synergy.

—Kyrie displays the first actual act of defense of the night, attacking his Cleveland bud Tristan Thompson and forcing a turnover. The Cavs guard is definitely an early (/only) candidate for DPON (Defensive Player of the Night, naturally).

—Kiss Cam helps bring a little energy to a relatively lifeless Toyota Center. The Nuggets mascot Rocky got in on the action, doing something with a fan in the crowd that is illegally…well, apparently not Texas. But at least a few other states—perhaps all of them.

—Isaiah Thomas hits back-to-back treys, then hits another one a few plays later. That’s 12 points for him, a game-high. 43-29, Team Chuck.

—Biggest highlight of the night comes on a Kemba-Waiter alley-oop off the backboard. Pretty dirty.

—Also: still no sign of Chuck. Not sure what the deal is with that, kinda confusing.

—A Tristan Thompson dunk makes it 60-38. The worst possible thing for the Rising Stars Challenge would be a blowout, and we seem to be on our way to one. Something (or someone…) needs to spice this thing up.

—Kenneth Faried drains a 3, and smiles his way down the court afterward. 65-45 Team Chuck headed into a timeout. Time for the Houston Rockets Launch Crew Experience!!!!!!!!!!

—The Houston Rockets Launch Crew Experience was like an almost-decent version of Bring It On. So, yeah: pretty awesome.

—Halftime! 90-66, Team Chuck up. Faried with 19 points, Irving with 14. If this whole talking-for-a-living business doesn’t work out, Charles Barkley might have a future in NBA GMing.

—OK, we’re back. Kyrie Irving hits a quick 3 and is jokingly talking some ish to Bradley Beal. Comeback time?

—This is trudging along. And trudging, and trudging. 109-88 Team Chuck after a semi-big Anthony Davis slam.

—Bunch of sloppy play leads to a pretty nice Kemba Walker jam. 113-94. Looking for something besides the score and an occasional dunk to live-blog about but I am failing. Oh: Just finished all of my Coca-Cola. Definitely need more.

—Nikola Vucevic finishes an alley-oop and holds onto the rim a little longer than necessary, trying intentionally to hang above his Magic teammate Andrew Nicholson for as long as possible. Good times.

—PUT YOUR HANDS TOGETHER a robotic emcee demands. Nobody complies. Dead quiet in here. Harrison Barnes with a powerful dunk, though. 121-103, Team Chuck.

—Kyrie Irving just BURNED Brandin Knight, crossed him up, made him fall, then drilled a 3 right over him.

—Knight follows that with a 3 in Irving’s dome, good.

—OK, this is fun. Kyrie comes right backat Knight, but the ball bounces off Knight’s leg and a foul is called. Momentum ruined.

—MOMENTUM BACK! Irving and Knight are going back and forth every play. But neither can finish—Knight misses a drive, Irving misses a trey, Knight misses a runner, etc. Still, the constant competition gets the (small) crowd going, and KD is on the sideline going wild, loving every minute.

—Just throwing this out there: Inflatable mascots are undefeated.

—Full-fledged dunk contest breaks out: Waiters goes through-the-legs. Faried goes off-the-backboard. Lillard does a double-pump that he has to lay-in. Faried throws down another one. Waiters finishes a dunk off the self-bounce. Shved missed a windmill, then Faried hits one. We’re just about done here.

—Chandler Parsons brings us home with a pretty average dunk. Team Chuck wins, and does so mighty handily, 163-135. Faried led all scorers with 40(!) and earns MVP honors.

Thanks for following along—we’ll be back tomorrow night live-blogging the Saturday action.