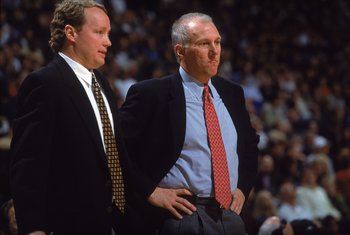 With the Warriors and Indiana Pacers still searching to fill their head coaching voids, Mike Budenholzer has emerged as a front runner for Golden State.

Budenholzer joined the NBA coaching ranks in 1996 after being hired onto the San Antonio Spurs staff. Since 2007, he has served as Greg Poppovich’s go-to man.

From the Contra Costa Times:

“Add another name to the list of finalists for the Warriors’ head coaching vacancy: Mike Budenholzer.

It’s not a new name, as the San Antonio Spurs assistant coach was mentioned almost immediately after Golden State parted ways with Keith Smart on April 27.

According to a team source, co-owner Joe Lacob is flying to San Antonio on Wednesday to interview Budenholzer. Lacob, who was present for the Warriors’ predraft workout Tuesday at the team facility, didn’t make himself available to the media and has declined to reveal the names of candidates. But if Lacob’s trip to San Antonio suggests anything, it’s that Budenholzer is being seriously considered.”

With the Lakers completing their unexpected hire of Mike Brown and the Rockets choosing to ink a deal with Kevin McHale, the list of remaining coaching candidates is beginning to dwindle.

A decision is expected to be made before the June 23 draft, with the Warriors holding the 11th overall pick, but no definite time table has been set.