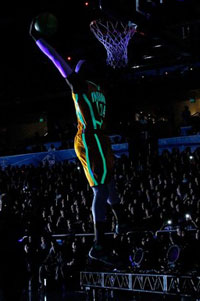 In the dunk contest over the weekend, Paul George did the Vince Carter 360-windmill dunk… With all the lights in the arena off and his uniform glowing in the dark. And he still lost.

The NBA, famous for the amount of fan input that’s incorporated into its All-Star festivities, may have taken it one step too far in giving fans the keys to the car and letting them vote on the winner of the Dunk Contest. That act alone may have killed the contest forever.

Nothing against Jeremy Evans who had one legitimately good dunk—the two ball toss while jumping over Gordon Hayward sitting on a bar stool—but Paul George had three. And the glow-in-the dark dunk should have made him the winner, hands down.

I wonder if the fans who voted realize that you really only get one shot at that dunk? If he misses the first time, the entire thing is blown. On top of that, we’re not talking about a regular, run-of-the-mill jam either. PG did VC’s iconic windmill from 2000 the first time out, in a gym full of people all sitting in the dark, yo. Not to mention a 360 reverse windmill while slapping the glass and he jumped over his 7-2 teammate, Roy Hibbert, and 6-5 Dontae Jones at the same time.

Yes Jeremy Evans jumped over Gordon Hayward who is 6-9, but Hayward was sitting down. Evans also jumped over Kevin Hart. Was the general voting public aware that a standing Kevin Hart is just three apples high? I mean, c’mon… Chase Budinger cleared Diddy who’s at least 5-9. And yes, I just called the man known as ‘Chocolate Drop’ a Smurf.

All-Star Weekend felt rushed and thrown together already, but leaving the dunk contest voting in the hands of everyday internet and a cell phone users instead of trained and experienced professionals, not only made the event the lowlight of Saturday night, but made the whole thing a joke. The dunk contest has been in a steady free fall for years, but this year, it may have finally hit rock bottom.

Why would George—who clearly has potential to be one of the League’s best contest dunkers— want to compete again, especially if this voting format continues? In fact, why would anyone want to enter when their fate is left to those who aren’t truly able to appreciate how difficult it is to actually perform these feats of athleticism? That part should be scrapped, never to return.

Of course we could sit here and complain all day about where the event misses the mark, but it’s more important to try and figure out what can be done to fix it. But it’s really hard to say because a large part of that is solution centers around the competitors, yet nobody really knows how the field is chosen. How does John Wall—who had the best dunk of the weekend—not make it into the competition?

Also, how many chances does a guy get to attempt the same dunk? Yes it took George a few tries to nail the Larry Bird sticker dunk, but Derrick Williams spent the better part of a minute attempting an off-the-glass-between-the-legs jam that he never got down. It was reminiscent of Nate Robinson from a few years ago.

The best thing for the contest would be to go back to its original format of two dunks for every participant per round and one replacement dunk per attempt. That will help guys concentrate more and give a better show. Oh yeah, bring the judges back. Also, get rid of the props and gimmicks. The glow-in-the dark jam was cool, but the overuse of gimmicks the past few years have really cheapened the event.

Finally, raise the incentive for participating.

Jack up the prize money. Give away a new Cadillac Escalade Hybrid. Make the League’s biggest names, the highest flyers and most creative dunkers actually want to participate in the contest. Otherwise, make the Three-Point Shootout the signature event of All-Star Saturday and move the Dunk Contest right after the Shooting Stars competition because right now, that’s where it belongs.