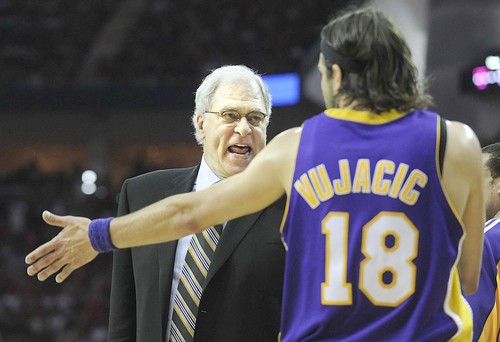 Knicks head coach Derek Fisher had a tough time installing the Triangle Offense in New York last season, but team president Phil Jackson was undeterred, and brought in some reinforcements this summer.

Vujacic, 31, says he’s ready to provide the Knicks with some much-needed veteran guidance.

Phil Jackson believes Sasha Vujacic’s knowledge of the triangle offense is a “bonus” for the Knicks. […] “Having played for me in L.A., Sasha knows the triangle and can help our off-guards get the hang of playing on top of the floor,” the Knicks’ team president told Charley Rosen over the summer.

Vujacic said earlier this week that he’s prepared to fill that role in New York. […] “Of course, of course. I was always someone that helped players on the court. We have a lot of rookies and a lot of younger players –- I still consider myself young by the way -– so we have a great mix of guys and I’m looking forward to teaching them and giving them help,” Vujacic, 31, said by phone. “I don’t want to be a teacher because we have a coach that will lead us towards something [but] if there’s going to be anything needed for me to show or do I’ll be more than happy to do so.”

“It’s a proven offense. It’s an offense that won not only games but championships,” said Vujacic, who won two titles under Jackson in Los Angeles. “…. Obviously you need to have players that can mold into that offense and to follow it and I think that our personal right now is very excited.” […] Vujacic has spent time recently working out with some of his new teammates at the Knicks’ training facility. The players go through some of the triangle offense before they scrimmage.