Post Up: KD And The Warriors Get The Last Laugh in Oklahoma City 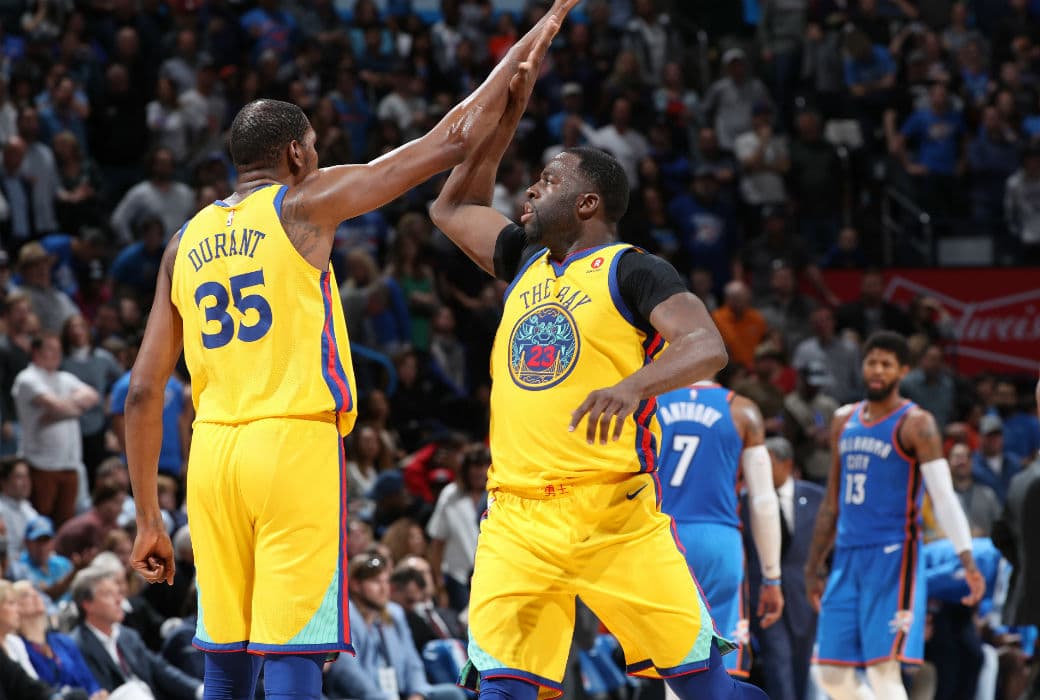 Even without Joel Embiid or Dario Saric, Philly dominated this one from the opening tip. The 76ers outrebounded Brooklyn by 20 and shot over 54 percent from the field while forcing 18 Nets turnovers. Philly sharpshooters J.J. Redick (19 points) and Marco Belinelli (17 points) ran circles around the Brooklyn defense, while Ben Simmons (15 points, 12 rebounds, 6 assists) put together his 36th double-double. He also became the second player in NBA history to eclipse 1,200 points, 600 rebounds and 600 assists in a rookie season. The other? Oscar Robertson.

Toronto is still in a battle with Boston for both the No. 1 seed in the Eastern Conference and the Atlantic Division crown, so the Raptors’ recent swoon is more than just the result of complacency and may be a cause for concern. All five Cavaliers starters scored in double digits — led by LeBron‘s 27 points and 10 rebounds — as Cleveland led most of the way in Kyle Korver‘s return.

Kyle Lowry (5 points on 2-of-11 shooting) never got going and even Toronto’s stellar bench couldn’t make up the missed production. DeMar DeRozan had a team-high 19 points with seven dimes. The Cavs also need to keep winning to maintain their No. 3 spot in the East and, with the 76ers and Pacers bearing down, Cleveland having homecourt advantage in the first round is far from guaranteed. But, if the Cavs keep playing like this, they’ll be fine.

Atlanta is far from the postseason but gave the playoff-bound Heat a real scare on Tuesday night, leading 98-90 with three minutes left to play. However, as the final score would indicate, Miami scored the game’s final 11 points with a crazy rally and was able to seal the win with two last-second Josh Richardson blocks following a go-ahead Hassan Whiteside tip-in.

John Collins (19 points, 10 rebounds) led the way for the Hawks, who also got 18 points off the bench from Tyler Dorsey. Goran Dragic had 22 points and 10 assists for Miami while Whiteside — days after complaining about his lack of playing time — posted an 18-point, 12-board double-double.

The Mario Hezonja redemption tour continues, as the former lottery pick — whose fourth-year option wasn’t picked up by the Magic earlier in the season — keeps playing well. He paced the Magic with 19 points on 7-of-12 shooting, as Orlando used a dominant final frame to beat up on the Knicks.

New York was just 4-of-27 from three-point range and scored a measly 28 second half points. Tim Hardaway Jr. scored 16 points in the defeat. It was a big loss for the Knicks from a draft pick perspective, as they entered a tie with the Bulls for the 8th-worst record in the Association.

Chicago has followed up a seven-game losing streak with a fairly improbably three-game winning streak, especially for a team missing a good chunk of its starting lineup. Lauri Markkanen (24 points in 24 minutes) knocked down five triples while relative newcomer Sean Kilpatrick added 21 points off the bench.

Kilpatrick with the break away dunk 🙌 pic.twitter.com/qPhL6x90km

The Hornets committed 20 turnovers in the loss. Dwight Howard (23 points, 17 rebounds) had another big game while Malik Monk, who hasn’t gotten consistent playing time in his rookie season, scored 21 points on 8-of-15 shooting. Kemba Walker struggled from the field, posting just nine points and four assists.

Another ho-hum 71-point first half for the Rockets made for a pretty boring final 24 minutes as Houston rolled past the Wizards. James Harden (38 points, 10 rebounds, 9 assists) dominated all game and Washington — like most teams — had no answer for him. There was some injury concern for the Rockets, though, with Ryan Anderson suffering a left ankle sprain after playing just five minutes. He didn’t return.

The Wizards are still reintegrating John Wall back into the flow of things and he had an off-night, shooting 3-of-10 from the field along with eight turnovers. Bradley Beal (27 points) was locked in.

The shorthanded Celtics had to lose at some point. Boston’s six-game winning streak, all without Kyrie Irving, was snapped by a Bucks team that needs one more win (or one more Pistons loss) to clinch the final playoff spot in the Eastern Conference. Giannis Antetokounmpo (29 points, 11 rebounds) and Khris Middleton (20 points, 8 rebounds, 9 assists) were great, and Giannis may have saved the game with an insane chasedown block on Jaylen Brown with less than a minute to go.

No layup is safe when Giannis is on the court 😳 (via @Bucks) pic.twitter.com/EjtHYOn9D4

Brown and Jayson Tatum (combined for 44 points) provided much of Boston’s scoring on a night when the bench didn’t do much.

The latest KD–Russell Westbrook battle in Oklahoma City lived up to the hype, even with Steph Curry on the sidelines. Durant dropped 34 points (albeit on 9-of-25 shooting) and grabbed 10 boards in the Golden State win while Westbrook had a ridiculous 44 points and 16 rebounds.

For the most part, though, the OKC starting five outplayed that of the Warriors. The difference in this game was when KD and Russ weren’t on the floor. Golden State got 38 points from its bench while OKC got just 14. The trio of David West, Damian Jones and JaVale McGee combined to go a perfect 12-for-12 from the field.

Paul George (5-of-19) and Carmelo Anthony (4-of-16) weren’t very efficient, with Melo missing all nine of his three-point attempts. The Thunder are far from guaranteed to make the postseason and are just 1.5 games up on idle No. 9 Denver. A first round matchup with Golden State is also very possible.

Portland has already clinched a playoff spot, but losing to lottery-bound Dallas delayed the Blazers’ quest for homecourt advantage in the postseason’s opening round. Every Mavs starter reached double figures — led by Dennis Smith Jr.‘s 18 points — with Yogi Ferrell adding 15 as a reserve.

The Blazers couldn’t buy a three, going 10-for-40 beyond the arc. Damian Lillard (29 points) was the game’s high-scorer but was just 6-of-20 from the field. He did make all 15 of his free throw attempts. Jusuf Nurkic (15 points, 13 rebounds) was effective but limited to 27 minutes, partially due to foul trouble.

For the third consecutive game, the Nuggets played a postseason-bound team tough and won a one-possession decision that helped them keep pace in the West. Following wins over the Thunder and Bucks, Denver had a chance to gain some ground against a red-hot Pacers team and did just that. Nikola Jokic (30 points, 6 rebounds, 7 assists, 4 steals) filled up the stat-sheet in the W alongside Will Barton (26 points, 10 rebounds) as Gary Harris continued to sit with due to a knee injury.

WILL ALWAYS SHOOT FROM DISTANCE pic.twitter.com/sTsUaJkpwy

Victor Oladipo (25 points, 6 rebounds, 7 assists, 4 steals) played well as Indiana had a solid offensive game, but lost the rebounding battle by 14 and couldn’t stop Jokic at all. When he’s making threes and getting his teammates involved, there’s not much any team can do against him.

Without Lonzo Ball, Brandon Ingram and Isaiah Thomas, the Lakers needed other guys to step up if they were going to have a chance to take down the Jazz. Julius Randle (12 points, 12 rebounds, 9 assists), Kyle Kuzma (26 points) and Kentavious Caldwell-Pope (28 points) did just that but it still wasn’t enough as the backcourt combo of Ricky Rubio and Donovan Mitchell (57 combined points on 37 shots) spearheaded a big scoring night for Utah.

He shot 50% from distance (4-8) and had his 44th game with 20 points or more.#DonROY #TakeNote pic.twitter.com/mng9ppqtLh

The Jazz, which leapfrogged the Thunder to tie with the Spurs for the No. 4 spot in the West, scored 65 first half points en route to a third-straight win. Rudy Gobert (12 points, 16 rebounds) even helped in facilitating with five assists, his second-highest total of the season. Joe Ingles knocked down 3 threes, extending his streak with at least one made triple to 35 games. That’s a Jazz record.

No player from this year’s rookie class has arguably made a bigger in-season improvement than Josh Jackson (28 points, 6 rebounds), who couldn’t find his shot for the first few months of the season but has turned into a reliable scorer for the Suns as of late. His big game helped the Suns snap a franchise-worst 15-game losing streak that lasted the entire month of March. Alex Len helped with a 17-point, 15-rebound double-double off the bench.

Bogdan Bogdanovic (22 points) and Justin Jackson (19 points, 8 rebounds) had good performances in the loss. With the Mavs’ win over Portland, the Kings moved to a half-game “behind” Dallas for the 5th in the reverse standings. Phoenix has a two-game “lead” over Memphis for the worst record in the NBA.

Maybe against the Spurs of old — with Kawhi Leonard — a 41-point fourth quarter and late double-digit comeback would have been unthinkable, but this Spurs team isn’t the Spurs of old anymore. Needing a win to move within 1.5 games of a playoff spot, the Clippers fought back to stun San Antonio thanks to 31 points from Tobias Harris and a go-ahead three from Austin Rivers with 29 seconds left.

Lou Williams (22 points), as usual, provided a massive spark to draw the game to a tie midway through the final quarter just minutes after the Spurs led by 11. But San Antonio went back up, and held a 103-96 advantage with three minutes to play. LA scored the next seven points to tie it up at 103 and took the lead for good on Rivers’ three from the wing.

LaMarcus Aldridge (35 points, 9 rebounds) had his way all night in the loss but he and Patty Mills (17 points) didn’t get much help, especially in the fourth quarter.