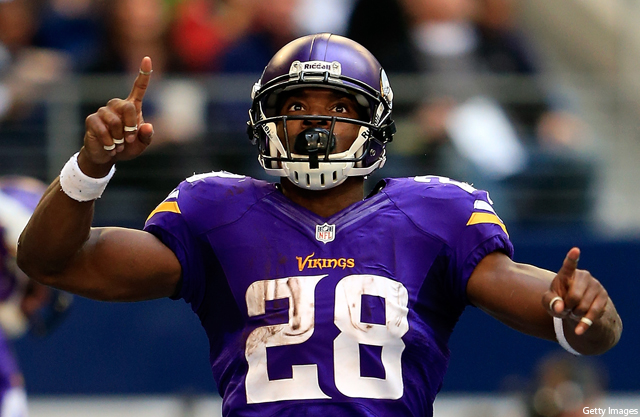 Last season, Vikings running back Adrian Peterson returned from an ACL tear and rushed for 2,097 yards and scored 13 total touchdowns, leading Minnesota to the playoffs and earning him NFL MVP honors. He’s the best running back in the NFL, no doubt—and arguably the best player in the game, period.

But many years before “All Day” became a five-time All Pro, he was a three-sport athlete at Palestine High School in Texas, running track and playing basketball in addition to his heroic efforts on the gridiron. And while he’d never be mistaken for an NBA prospect, it’s not hard to imagine Peterson’ hulking frame and incredible athleticism being a problem for opponents on the hardwood.

So when we dialed up AD for a football Q+A over at TDdaily.com—which you can read in full here—we made sure to include some basketball-related questions, too. Glad we did. Check it out:

SLAM: You played basketball in high school—what position? What kind of player were you?

Adrian Peterson: Yeah, a little bit. I played power forward. I played the post at times, at 6-2 [laughs].

SLAM: If you had to compare your game to an NBA player?

AP: Hmm, I’d say a more athletic Dennis Rodman. I was Defensive Player of the Year two years, so I was very good on defense. I averaged like 12 or 13 points a game and 10 rebounds, some steals. But I’m more of a defensive guy, a defensive specialist. I didn’t get any DI scholarship offers for basketball.

SLAM: So football was never really in danger of being overtaken by hoops?

AP: No, more so track than basketball.

SLAM: Who’s your favorite NBA team right now? Who are some guys you like to watch play?

AP: My favorite guy to watch is LeBron James. I’ve been following him since he was down in Cleveland, and now he’s down in Miami. So I like those guys. And then the Thunder—NBA basketball first came to Oklahoma when I was in college, when the New Orleans team came down there, so I started following those teams as well. I like Kevin Durant, he’s a nice player. And Chris Paul—Chris Paul’s a guy that I love, man. He does it all, defense, offense, he runs things. He’s the type of player you want to pattern yourself after.

SLAM: Who’s the best basketball player on the Vikings?

AP: The best basketball player on the Vikings? I’d probably have to say myself. And this is why I say that—because, I can score, but even more so, I play good defense. Now, if Sidney Rice was here, I’d have to give it to him. But he’s no longer a part of our team. He was Mr. Basketball in South Carolina.

SLAM: Who are some NBA guys who you’re cool with?

AP: James Harden, he’s a cool guy that I kick it with from time to time. I really don’t deal with too many basketball players like that. Kevin Love is a guy that I just met recently, but he seemed like a pretty cool guy. But yeah, James Harden, he’s down in Houston now, before then [in Oklahoma] we kicked it a couple times, but now that he’s down in Houston which is where I live in my time off, we see each other from time to time.

SLAM: Who’s your pick to win the title this year?

Follow @TDdaily on Twitter for the best in football, from the brain trust that brought you SLAM Magazine! Peterson was made available to us thanks to his continuing help with EpiPen’s campaign to raise awareness about anaphylaxis and life-threatening allergies. For more, visit 25yearsofEpiPen.com. 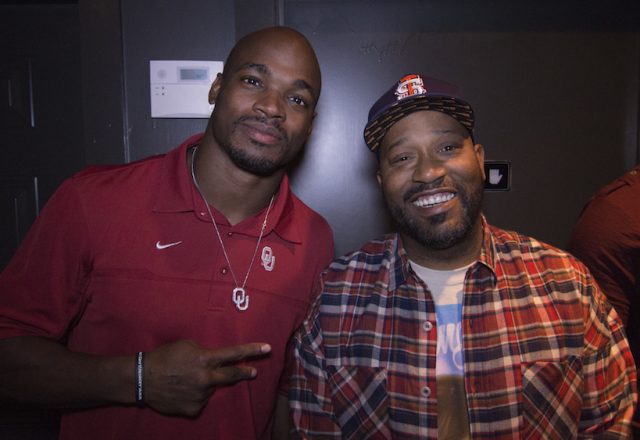