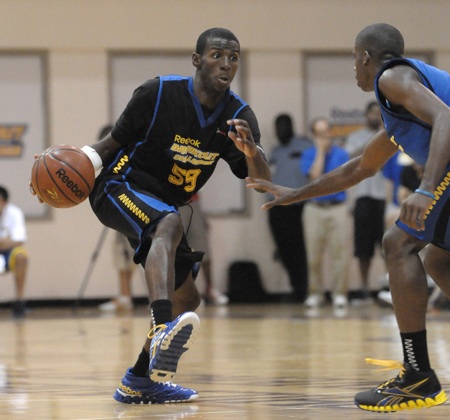 On Saturday, Reebok wrapped up its Breakout Challenge at Philadelphia University, which featured 120 players looking to let their game make their name. A one of kind event, the Reebok Breakout Challenge offers an opportunity that no other sneaker camp does — allowing any basketball player to try out for an opportunity to play in front on Division I coaches. With its Headliner Try Outs held at 13 different cities, 56 players were given the opportunity of a lifetime by being invited to Philly and

showcase their skills amongst some of the country’s best.

After being discovered through the Headliner Try Out system four years ago, John Wall and Reebok wanted to look for that next diamond in the rough. In my personal opinion, it is in camps like this one where you see guys give it their all. In other camps, where they basically gather up All-Americans and make them scrimmage each other, you don’t always see a player’s full potential since there really isn’t an urgency in getting noticed – if you got invited then it means you’re already consider among the best. But at the Breakout Challenge, you can tell guys are walking with a chip on their shoulders. They are aware that they’re playing for their lives. They know that one impressive outing can change their futures completely.

And so this year’s event saw new names that will now be mentioned a whole lot more among those that follow high school ball – and most importantly among college coaches. Wall spent all four days with the players, just talking to them and answering any questions they had. He even played one-on-one with a few.

The following are some of the guys that stood out to me while I was down there, in no particular order or ranking.

Neville Fincher – Maybe the most impressive (or dominant?) dunker at the event, Fincher put up a dunking clinic. Everything from two-handed jams, to one-handed tomahawks, the Teaneck (NJ) native showcased his athleticism and overall talent. Looked great running the floor in transition; this 6-9 forward can get off the floor in a hurry. Just an overall threat in paint, he’s a prospect that probably deserves way more attention than what he’s been getting.

Paul Watson Jr. – This Phoenix native was one of the most versatile players that I got a chance to watch in this event. Watson showed a little bit of everything. From the ability to hit shots from behind the arc, to scoring at the rim in traffic.  Although certainly far from being a hometown-kid, he seemed to have become a fan-favorite thanks to his freakish athleticism and impressive hops. Just like Fincher, Watson most definitely loves dunking the ball (didn’t keep count but I would say at least five in one game I saw).

Rysheed Jordan (below)- This 6-4 wing, listed as a point guard, was probably the most talented and athletic player at the event. And to be honest, that didn’t take long for one to realize. His explosiveness was as clear-cut as it can get. Jordan’s quick first step was all it

usually took for him to blow by his defender on his way to the rim. He also possesses a killer crossover that had the crowed mesmerized. The Philly-native showed great court vision and always seemed to be on attack mode. This aggressive guard can play D-1 ball anywhere.

Akosa Maduegbunam – One of three-players to come out of the Boston Headliner tryouts, Maduegbunam was among the most impressive shooters I saw at the event. At one point, he hit four three-pointers in a matter of minutes in the fourth quarter of a game. What was more impressive was that he exhibited the ability to drain jumpers in all types of situations – catch-and-shoot, off-the-dribble, coming out from a pick, etc. In addition, he did a good job finding the open man on numerous occasions.

Miles Overton – Just like Maduegbunam, this Chester (PA) native can hit shots in a variety of ways. He did seem to like shooting off the pass though. But I wouldn’t necessarily call him a spot-up shooter. Overton demonstrated range from way beyond the arc. The 6-4 combo guard encompasses a strong body-frame with college-ready physique. He also did a good job handling the ball and seems like although shooting guard would be his position at the next level, he would also have little problem running the point if called upon.

Shep Garner III – Another Philly native, Garner was among the youngest players at the camp. A member of the 2014 class, he showed a whole lot of poise. The very agile and athletic shooting guard demonstrated a knack for hitting shots beyond the perimeter. At one point, he hit three consecutive three-pointers in what was probably a two-minute span, or just about. The 6-2 guard also showcased his athleticism and ability to get up in the air – even catching an unexpected one-handed jam at one point.

Tony Bagtas – If I had to name some players that broke out in this event, Bagtas would definitely have to be in my list. Although listed at only 5-11, in the game I caught on Friday afternoon at least, he seemed uncontainable. Three-pointer after three-pointer after three-pointer, the Georgia native didn’t seem to miss. It got to the point when he did miss, you could hear the crowd’s surprised reaction. Aside from his terrific shooting outing, Bagtas proved to be a very quick and slick point guard that can get to the paint and finish at the rim on bigger guys – showing no fear or hesitation whatsoever. He also demonstrated great court vision, sneaking the ball in the paint through traffic for easy lay-ups.

Daniel Dingle – The Bronx native was one of the most well-rounded players in the camp. Dingle’s forte is finishing at the rim – some way, some how. I’ve always heard that he is an undersized forward. But if you’ve watched him play, then you know the effort and hustle is never lacking. He does a good job getting others involved and seems to be on attack mode.

Nik Staukas – The word on Nik was that he was shooter. But at the Breakout Challenge he seemed to want to change that rep to a more versatile one. And so he did by driving to the rim a whole lot more. He is a Michigan-commit and by the looks of it, he has the skills set to hold his own in the Big Ten.

Jerome Frink – This 6-6 small forward didn’t make this list because he killed the competition. But I thought he should be mentioned because of what could be. Unless you were at the camp, you probably wouldn’t be able to take notice since his stats didn’t raise eyebrows. What I did see is a whole lot of potential. His game seems to be a little bit rusty right now but you can tell he got the tools. Frink did a good job creating shots for himself and finding ways to get to the rim, but unfortunately he couldn’t quite finish the plays. He has an array of moves and a strong body frame. And now heading to his senior year at St. Anthony, expect for legendary coach Bob Hurley to help tune up his game in the upcoming months.