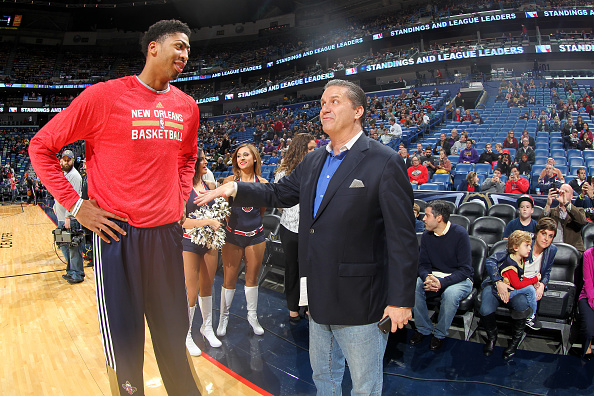 University of Kentucky head coach John Calipari has long been the subject of rumors when it comes to just about any NBA head coaching vacancy. In particular, any job with a team that has one of his former players would seem to make sense.

Enter Anthony Davis and the New Orleans Pelicans. Now that Monty Williams has been fired, wouldn’t it be awesome if Coach Cal signed up to coach the Pels?

According to one report, Calipari is interested in the job, and there have even been “exploratory conversations” between Cal and the team. The sticking point, it sounds like, is money. But it’s still early.

From John Reid of NOLA.com:

Given the opportunity to reunite with star forward Anthony Davis, Kentucky coach John Calipari has made it known to New Orleans Pelicans officials that he’s interested in the team’s vacant head-coaching job, a source close to Calipari said Tuesday.

There have been exploratory conversations between Calipari and the Pelicans, the source said, but it doesn’t appear the team would be willing to meet his financial demands to leave Kentucky.

League sources said the Pelicans are willing to pay around $4 million to $5 million per season for Monty Williams’ successor. Williams was fired last week after five seasons at the helm.

But Calipari makes about $8 million annually and recently agreed to a one-year contract extension through 2022, which he hasn’t yet signed. The $3 million gap in annual compensation is a major sticking point for Calipari, who would also want input on the Pelicans’ roster, according to the source.

UPDATE: For what it’s worth, Coach Cal tweeted the following a few minutes after this story hit the web:

Even though Anthony and Tyreke are in NOLA, I have no interest in the Pelicans or any other job. I have a great job and I'm happy at UK.