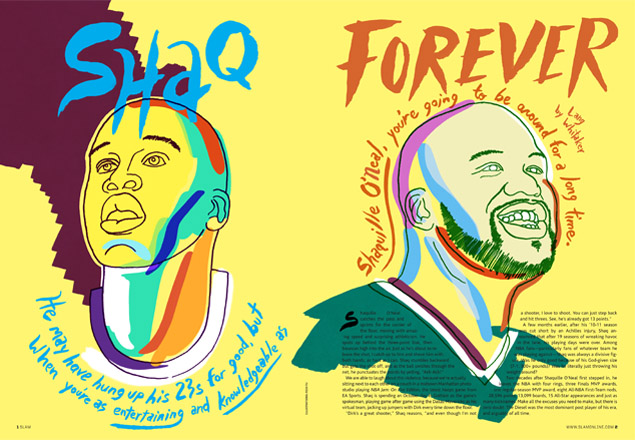 Shaquille O’Neal catches the pass and sprints for the corner of the floor, moving with amazing speed and surprising athleticism. He spots up behind the three-point line, then bounces high into the air. Just as he’s about to release the shot, I catch up to him and shove him with both hands, as hard as I can. Shaq stumbles backward but gets the shot off, and as the ball swishes through the net, he punctuates the points by yelling, “Ack-Ack!”

We are able to laugh about this violence, because we’re actually sitting next to each other on a couch in a midtown Manhattan photo studio playing NBA Jam: On Fire Edition, the latest hoops game from EA Sports. Shaq is spending an October day in Gotham as the game’s spokesman, playing game after game using the Dallas Mavericks as his virtual team, jacking up jumpers with Dirk every time down the floor.

“Dirk’s a great shooter,” Shaq reasons, “and even though I’m not a shooter, I love to shoot. You can just step back and hit threes. See, he’s already got 13 points.”

A few months earlier, after his ’10-11 season was cut short by an Achilles injury, Shaq announced that after 19 seasons of wreaking havoc in the lane, his playing days were over. Among NBA fans—particularly fans of whatever team he was playing against—Shaq was always a divisive figure. Was he only good because of his God-given size  (7-1, 300+ pounds)? Was he literally just throwing his weight around?

Two decades after Shaquille O’Neal first stepped in, he leaves the NBA with four rings, three Finals MVP awards, one regular-season MVP award, eight All-NBA First-Team nods, 28,596 points, 13,099 boards, 15 All-Star appearances and just as many nicknames. Make all the excuses you need to make, but there is zero doubt: The Diesel was the most dominant post player of his era, and arguably of all time.

While we won’t see him on the court again, fans won’t lose him entirely: Once the NBA lockout ends, Shaq will join Turner Sports as their newest NBA analyst. Seems like a perfect role for the big man, because when Shaq talks, it’s always worth a listen.

SLAM: Did you play a lot of video games growing up?

SHAQ: Yes. I played NBA Jam, the arcade version. Matter of fact, I’ve still got the arcade game at the crib.

SLAM: Did you play video games on the road? Did you travel with your PS3 or Xbox?

SHAQ: Yes. I played Jam, then I started playing fighting games, Mortal Kombat. Then I put it down for a while. Then when Grand Theft Auto came out I started playing again. Now, the Call of Duty game, I’m playing that. But I’m about to go back to Jam.

SLAM: Did you play video games at LSU?

SHAQ: I did. What was that game…the basketball game…

SHAQ: Exactly! I was the master of Double Dribble! I used to go to the corner, and it was like, “Ack-Ack!”

SLAM: How would you fix the lockout?

SHAQ: I’d try to have a friendly conversation. And then you have to try to protect people from each other. Like, I hear some of the owners say the players are making so much money. Well, why are you paying them that? The answer to that is because if you don’t pay them, guys like Mark Cuban will. So, we have to make a system that protects everybody. I also think we have to have a system where we can’t have the super teams anymore, but I don’t think dropping salaries is the answer.

SLAM: You sort of had the super team thing in L.A.

SHAQ: What we had was me, Kobe, Karl and GP.

SLAM: But it didn’t work.

SHAQ: Didn’t work. Those guys took less money, and it didn’t work for us. So I don’t know, hopefully it gets worked out. Because if it doesn’t, the people who lose out are the fans.

SHAQ: I just got hurt. That’s it. It was ripped, and I never got the MRI because I didn’t want to face the fact that it was ripped. When I finally got the MRI, it was ripped in half. I had to get surgery. That was the only thing. I didn’t want it to go like that, but I knew my career was either going to end on a sour note or a great note. It’s a fact.

SLAM: Did you think about trying to play this season?

SHAQ: No, because Achilles injuries for regular people take almost a year to heal. So I would have missed training camp, missed the All-Star Game, then tried to come back. It wouldn’t have been worth it.

SLAM: When you entered the NBA, you didn’t know exactly what kind of career you would have. Now, looking back on it, did it go about the way you thought it would?

SHAQ: Yeah, it actually did. Before I got that first ring, I thought I never was going to get one. Then I met Phil, changed my philosophy and knocked out three: bang-bang-bang. Then lost it for a while, then got another one in Miami. Even though I got four, I felt I should have six or seven. The first, with the Magic, we shouldn’t have lost that one. Then when the Lakers lost against Detroit, we shouldn’t have lost that one. And we should have made it to the Finals the year I played with LeBron, but we never quite got that far. In my mind I should have seven rings; in my mind I should be number two in scoring; in my mind I’m the most dominant big man to ever play the game.

SLAM: Who did you hate playing against?

SLAM: I mean, not players who could stop you, but guys who annoyed you.

SHAQ: Yeah, OK, that would be Oakley, Barkley—the little strong guys. And the guy from Detroit.

SHAQ: No, big butt guy. He always used to pull the chair in the post.