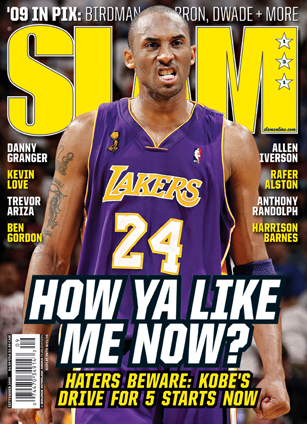 As Mutoni and I found our seats at the press table high above the Staples Center in L.A. and settled in to watch Game 1 of the NBA Finals, Marcel asked me about the game recap pieces he and I would be writing for SLAM 131. What exactly, he wondered, should we be aiming for?

I told Marcel that I always think of the issue of SLAM that drops after the Finals almost like a yearbook. By the time the issue is on newsstands, it’s been almost a month since the Finals ended. Not only is the season always over, but the Draft has happened and summer league is in full swing. But this is what we do. SLAM started putting Finals winners on the cover back in 1997 (issue 20 — Scottie Pippen), and after a few years off, we’ve done it every year since the summer of 2000 with SLAM 45 (featuring the Victorious B.I.G.).

Since we’re obviously not breaking any news by having the winner of the Finals on the cover, I’ve always looked at this issue as a keepsake, something hoops fans can cop and hold on to and then look back on, years later, to remember which Finals game went to overtime or which game Kobe it was that Kobe made that weird face where he stuck his jaw out (all of the games!).

With our mission clearly defined, putting together this cover has become about highlighting the story of the Finals. As soon as the Lakers won Game 5 and started celebrating, I got a text from Khalid that read “Gotta do the Kobe scowl pic for the cover right? Lol.”

The thing is, it’s not always that easy. While we’re trying to capture the story and spirit of the Finals with the cover image, we have to find a picture that works as a cover, meaning there has to be room for cover lines and all that stuff.

For this cover image, it came down to three options. One thought was to find a picture of the Lakers as a team, to symbolize that it was teamwork that brought the Lakers this title. We found a picture of Kobe, Gasol, Bynum and Lamar that wasn’t terrible, but it also wasn’t great (Gasol had his back to the camera). And the more we thought about it, the less we liked the idea. Because really, no matter how you want to look at it, the 2009 Finals were about Kobe finally winning a title as the man. He carried these Lakers, he won the Finals MVP, he cemented his personal greatness and he laid the cornerstone for what could very easily be a new dynasty. That’s the accomplishment we wanted to recognize.

This left us with two choices. One was a picture of Kobe jumping into the air immediately after Game 5 ended (similar to this one). But again, to me that isn’t what I’ll remember about the 2009 NBA Finals. My lasting memory of the 2009 NBA Finals will be nobody being able to stop Kobe. The celebrating image is Kobe commemorating what was finished, not what was beginning. And I think the image we chose for our cover accurately reflects that. (BTW, for everyone who says we hate Kobe, please note this is Kobe’s third cover in our last six issues. Haters.)

SLAM 131 isn’t entirely about Kobe and Lakers. We’ve also got our annual Year in Photos (a.k.a. Dome Shots), and it’s longer than we’ve been able to run it the last few years, so there’s a lot of dope pics for your walls. Also, some great features on guys like Danny Granger, Kevin Love, the debut of new High School Diary keeper Harrison Barnes, plus a beautiful old school story on former Sacto star Ricky Berry (RIP).

So that’s it. The issue is out now on newsstands. Cop it.

Oh, and here’s the cover…