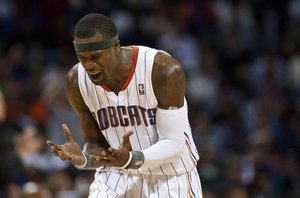 Things didn’t end well for Stephen Jackson in Charlotte, as he was traded away to the Milwaukee Bucks as part of a three-team deal.

According to Jackson, the Bobcats sat him on the bench towards the end of last season because they didn’t want to qualify for the Playoffs.

Jackson didn’t like the idea at the time, and isn’t afraid to say what he thinks was really taking place.

The former Bobcats shooting guard promises to bring some attitude to the Bucks after a three-way draft day trade landed him in Milwaukee. Jackson said he wasn’t bitter about the trade but he was confused as to why the Bobcats held him out with an injury toward the end of last season.

“The last 10 games, I could have played,” Jackson said. “But they shut me down. The team shut me down. So I kind of assumed they didn’t want to make the playoffs.”

In what was generally considered a very weak NBA Draft, one would have to wonder about Charlotte’s motivation to supposedly tank the last few games.

Whatever the case, Stephen Jackson gets a chance to move on with his career on a new team. Scott Skiles and Jackson are going to form a tremendous partnership in Milwaukee, wouldn’t you say?