He Wants the Trophy, the Victory, the Glory 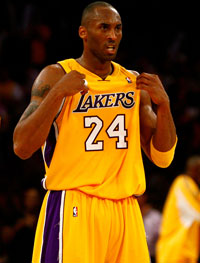 What can you say after such complete domination? What’s to discuss when every moment in Game 1 of the NBA Finals belonged to the Lakers?

The Magic were embarrassed. They were so thoroughly beat, in fact, that scapegoat talk was even abandoned. Jameer Nelson didn’t “throw off” the team’s chemistry. The entire Orlando squad performed at a sub-par level in no small part due to the tremendous play of the Lakers.

“Clearly, after the first quarter, we were totally dominated at both ends of the floor and on the boards,” Van Gundy said. “There was nothing I liked. . . . What was there to like?”

Searching for inspiration after the game, Van Gundy mentioned the “Memorial Day Massacre” in which the Lakers were drilled by 34 points by Boston in Game 1 of the 1985 Finals but came back to win the series in six games.

As Van Gundy tried to point out to his dejected team, comebacks after major beatdowns happened before. What he didn’t tell his team is that they’ve never happened against a Phil Jackson-coached team (the Zen Master’s something like 44-0 in Playoff series when his team wins the first game. Incredible.).

Andrew Bynum, despite foul trouble, was able to keep the Superman Howard from soaring, and the Mamba delivered quite possibly his most inspired game of the ’09 postseason. It was a thorough smacking — one without drama and controversy.

The game ended so much in the Lakers favor, there really aren’t words to describe it. That is, unless you are capable of going this hard:

Pass me the damn ball,
I don’t need a pick at all,
And don’t worry about my shot, because I’ma get that off,
I drops 40 on your double team,
Then I drop 81 on another team.

(The best rapper alive on the best baller alive)