After a 10-year hiatus, the Slam Dunk to the Beach showcase returned in 2014 with a talent-loaded schedule that drew in over 10,000 fans. Today, as it prepares for its 2015 games, the complete schedule for next month’s event was revealed. And once again, it will host some of the nation’s top recruits during the last weekend of December. See below for team/player info and the complete schedule from the event’s organizers:

The Delaware Sports Commission is excited to announce the full schedule of the Slam Dunk to the Beach basketball tournament, which will be held at Cape Henlopen High School from December 27-29, 2015. The final two teams of the 19-team field, which features representatives from seven states and the District of Columbia, have also been unveiled. Maret School of Washington D.C. and The Patrick School from Elizabeth, N.J. will round out the 2015 field.

In addition to the USA TODAY Super 25 rankings, nine of the 13 teams from the national field have been listed as MaxPreps “Early Contenders” for the 2015-16 season. La Lumiere and Roman Catholic made the “Will Make a Run” list which includes the top 13 teams in the country. Roselle Catholic and Ss. Neumann-Goretti (Philadelphia, PA) were the 14th and 19th rated teams on the list, respectively, with The Patrick School at 22nd overall. Bishop McNamara (Forestville, MD), Paul VI (Fairfax, VA), St. Benedict’s Prep (Newark, NJ), and Westtown School (Westtown, PA) all made the MaxPreps rankings as teams “On the Radar.”

The final announced team will be the first team to play as the event opens on Sunday, December 27 at noon with Maret School taking on Appoquinimink (Middletown, DE). In Sunday’s night session Ss. Neumann-Goretti faces Paul VI. Neumann-Goretti junior, Quade Green, and Paul VI senior, V.J. King, are both ranked as top 50 players in their respective classes by ESPN.

On day two of Slam Dunk to the Beach, 13th ranked Roman Catholic will compete against Maret School at 1:30pm. The night session features back to back games with ESPN25 players. Nazreon Reid, rated sixth in the nation amongst sophomores, and 20th ranked Roselle Catholic will tip-off against Paul VI. Immediately following will be former Slam Dunk to the Beach champion, St. Benedict’s Prep, taking on a Westtown School team that features the seventh ranked player in the 2018 class, Cameron Reddish. The First State and the Hoosier State will close out the action on December 28th as seven time Delaware state champion, Sanford (Hockessin, DE) challenges USA Today’s sixth ranked La Lumiere. The La Lumiere roster has a multitude of nationally ranked players in every class, including two players in the ESPN60 rankings, Brian Bowen and Jeremiah Tilmon.

The final day will be on Tuesday, December 29 and again will feature several of the top ranked players in the country. At 3:00pm, the third rated center in the junior class, Nick Richards of The Patrick School, will matchup against Bishop O’Connell (Arlington, VA). In the night session, ESPN60’s fourth ranked power forward, Mohamed Bamba, and Westtown School will play Friendship Collegiate (Washington, D.C.) prior to La Lumiere taking on St. Benedict’s Prep. The host school, Cape Henlopen (Lewes, DE), closes out the event against Appoquinimink. 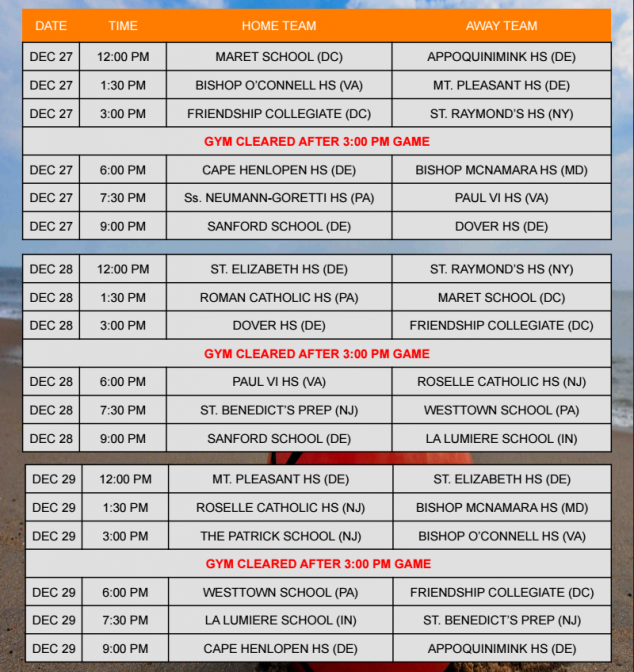