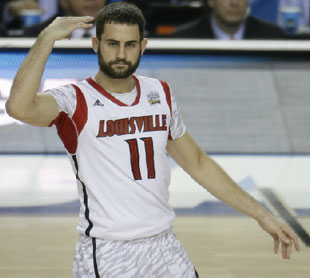 Alright, it’s time to take a deep breath. The confetti has fallen, the nets have been severed. The players have returned to campus, triumphantly, as emperors once returned to Rome. In Louisville, the celebration has quieted down. In Ann Arbor, the bonfires of rage and sadness have been kindled, doused and chronicled (seriously, here’s the article). The Cardinals and their immortal coach are the kings of college basketball… for now. Absurdly, ESPN is already laying out a list of title contenders for 2014.

Let’s look back for moment, though. Sadly, with the Final Four behind us and the long summer ahead, the Week in Review is done for the season. I’m in a reflective mood. Bon voyage, college hoops fans.

But first, what a way to end it. What a game! Monday night’s contest was one of the finest, most well-played National Championships we’ve seen in the past decade. Shot-making, defense, fast breaks, highlight-reel dunks, blocked shots, daring drives to the rim—it was all there, everything that makes this game great, everything the fans hope to see. If only they could all be like that.

And now for the most obvious Game of the Week of all time:

Not a bad week for Louisville coach Rick Pitino: He’s invited to the Naismith Hall of Fame, his son takes the Minnesota job, his racehorse qualifies for the Kentucky Derby, and, to throw a cherry on top of all that, he wins a second National Championship on Monday night in Atlanta, becoming the only coach in college hoops history to win a ring at two different schools. Coach Pitino, you deserve a hearty congratulations.

The Cardinals did not disappoint. Down big in the first half, they rallied with a flurry of three-pointers and amped-up defense, closing the deficit by halftime. In the second it was back-and-forth all the way, a three-pointer here, a running hook shot there, with a surplus of physicality and hard-nosed interior play. Michigan played extremely well, their stars were terrific, but ultimately the ball bounced Louisville’s way.

“This team is one of the most together, toughest and hard-nosed teams. Being down never bothers us. They just come back,” Pitino told the Associated Press. “I had the 13 toughest guys I’ve ever coached. I’m just amazed they could accomplish everything we put out there.”

Adidas unveiled several catastrophic uniforms this postseason (Notre Dame’s highlighter outfits spring to mind), but the company did create one of the sickest shooting shirts I’ve ever seen, those garishly colored “Rise To The Occasion” warm-ups. On Monday night, both teams rose as high as they’ve ever been.

Michigan came out like a house on fire. Were you surprised? The Wolverines boasted the newly-crowned Wooden Award winner, Trey Burke, built-for-the-pros guard Tim Hardaway Jr., sharpshooting Nik Stauskas on the wing and burly big man Mitch McGary, an ascendant force in the paint. Burke hit a couple of shots early and Michigan looked good.

Then little-known Spike Albrecht got going. He’s not big (5-11), he’s not experienced (freshman), and he looks like your little brother, but the kid is quick and smart and he can shoot like nobody’s business. The first half play-by-play of this ballgame reads like a Spike Albrecht highlight reel. At 14:58 he scored his first bucket on a three-point shot from 22 feet. At 13:06 he made another three. At 12:04 he swished a 26-footer, and everyone was asking, “Who the hell is this kid?”

With just over 11 minutes left in the half, Trey Burke was whistled for his second foul and took a seat on the Michigan bench. In lieu of the Wooden Award winner, Albrecht became Michigan’s primary ball-handler, the one man responsible for shepherding the pill through that vaunted Louisville press. He performed admirably and above expectations. At 9:29 he made a jumper. At 8:13 he drove, got hit and made both freebies. Yet another three-pointer fell at 5:58, and then he knocked down a layup with just under four minutes to play.

“That was honestly, probably back to high school days,” Albrecht told reporters. “Coach (John) Beilein doesn’t play guys with two fouls in the first half, so I knew I was in the rest of the half, and I was fortunately hitting shots. Teammates were finding me. That’s about it.”

But Louisville does this. The Cards will give up a big lead, settle down and eventually overtake their opponent, usually in the second half. This time, however, they didn’t wait until the second half, because bearded warrior Luke Hancock started raining three-balls.

The explosion started innocuously—Hancock was fouled with 3:33 left in the half and made both free throws. The basket, in his eyes, grew to enormous proportions. About 30 seconds later he knocked down a three-pointer. At 2:36 he hit another one, doing his best Spike Albrecht impersonation. At 1:51 he let fly a third three-pointer, this one from about 25 feet, well behind the arc. Down it went. By now it was clear that Hancock was unconscious.

He wrapped up the shooting display with a fourth three-pointer at 58 seconds. Somehow he was still getting open. The score read 36-35, Michigan. Hancock had almost singlehandedly brought Louisville back into the game, scoring 14 points in roughly two and a half minutes. The kid was hotter than hot. Later, Pitino would say that Luke Hancock made the Cardinals a great half-court team. Before Hancock raised his level of play, Pitino would explain during interviews, Louisville was a great defensive and transition team, but not a great half-court team.

In short, Hancock made all the difference.

At halftime Michigan was up one point, but the game had completely turned. Trey Burke hadn’t played for the final nine minutes of the half, and Louisville had grabbed the momentum.

The second half saw no shooting outbursts from Albrecht, Hancock or anyone else. The defense became tighter, and open looks were a rarity. As it’s done all season, Louisville’s aggressive press wore down the Wolverines. You can handle the press for a half, maybe 30 minutes, but eventually it grinds you down and you just don’t have the legs for it. Then Louisville’s quickness takes over.

The game was tight throughout the second half. With 4:10 remaining, Louisville’s Gorgui Dieng faked the drop step, spun left and stepped across the lane, flipping the ball over his head and knocking down a hook shot. It was one of the prettiest low-post moves of the night, and it gave Louisville a 73-65 lead.

Hancock hit a three-pointer not long afterward, followed by a Chane Behanan layup that brought the score to 78-70. Behanan, a 6-6 sophomore, was a vacuum cleaner on the boards. In the final minutes of the game, he corralled four offensive rebounds to keep Louisville possessions alive.

Michigan couldn’t close the deficit, and Siva hit a pair of free throws with 12 seconds left to seal the victory for the Cardinals. Fireworks exploded (the initial blast startled Pitino, who ducked for cover as he walked toward the Michigan bench) and confetti rained from the Georgia Dome rafters.

Injured Louisville guard Kevin Ware, who broke his leg in the Elite Eight last week, watched both Final Four games from the sidelines. His teammates wore Number 5 on their warm-ups in honor of Ware. In a heartwarming scene after the game, as the celebration swirled around the Cardinals players, the rim was lowered so Ware could cut down the final strands of the net.

Hancock led the Cardinals with 22 points. He met with his father after the game, who’s battling an undisclosed illness. Hancock became the first-ever bench player to win the Final Four’s Most Outstanding Player award.

On the Michigan side, Trey Burke finished with a game-high 24 points, while Spike Albrecht added his 17. Tim Hardaway Jr. and Glenn Robinson III each had 12 points for the Wolverines, who capped off a fine season with an unlikely run to the National Championship game.

“I’ve had a lot of really good teams over the years, and some emotional locker rooms, and that was the most emotional we’ve ever had,” Beilein told the AP. “The team unity we had, the sacrifice we had from five seniors who did not get to play very much, to these young guys buying into the team concept. We feel bad about it. There are some things we could have done better and get a win, but at the same time, Louisville is a terrific basketball team. We have not seen that quickness anywhere.”

Two terrific teams, one terrific game. Congrats to both squads on a great night in Georgia.

Wichita State’s magical run to the Final Four ended Saturday with a loss to No. 1 Louisville. Cardinals guard Russ Smith, a lightning-quick scorer, put up 21 points, reserve Luke Hancock had 20—shooting from range, driving to the tin, showing his wide-ranging skill set—and Louisville overcame a 12-point deficit with 13 minutes left in the game to knock off the Shockers and advance to the National Championship. Injured guard Kevin Ware watched from the sideline as Tim Henderson, a walk-on guard, knocked down a pair of big three-pointers and ignited a Louisville rally.

Wichita State played a great game overall. The Shockers were 40 percent from the field, with 24 points from forward Cleanthony Early and 13 from big man Carl Hall. But the Cardinals’ tenacious full-court defense got the best of the Shockers, who committed 11 turnovers on the night.

Syracuse looked like a world-beater heading into this one. Jim Boeheim had the 2-3 zone, the long-limbed guards and all the momentum in the world. Michigan, though, didn’t back down from the Orange or their defense, and took care of business on Saturday night to advance to the National Championship.

With 19 second left in the game and Michigan up 58-56, Syracuse had a chance to tie it or take the lead. Brandon Triche drove hard to the basket, but Michigan’s Jordan Morgan slid underneath him and drew a controversial charging foul. Wolverines ball.

John Horford hit one of two free throws, Syracuse’s last chance was blocked, and Horford sealed the win with a fast-break slam.

Michigan’s best player, guard Trey Burke, scored just seven points on 1-8 shooting Saturday. But some other guys stepped up, including Tim Hardaway Jr. (13 points), Glenn Robinson III (10) and Mitch McGary (10 points, 12 rebounds). It was a team victory across the board.

“We know Trey is our leader, and sometimes he’s not going to have a game like he’s had all season,” Hardaway Jr. told the AP. “That’s when our team stepped up.”

Luke Hancock, Louisville—The versatile forward was named the Most Outstanding Player of the Final Four, and for good reason: Mr. Hancock dropped 20 points against Wichita State on Saturday, then shocked Michigan with a three-point barrage and 22 points in Monday’s final. He was deadly from long range and brought Louisville back in the first half, scoring 14 points in about two and a half minutes. Nice work, Luke!