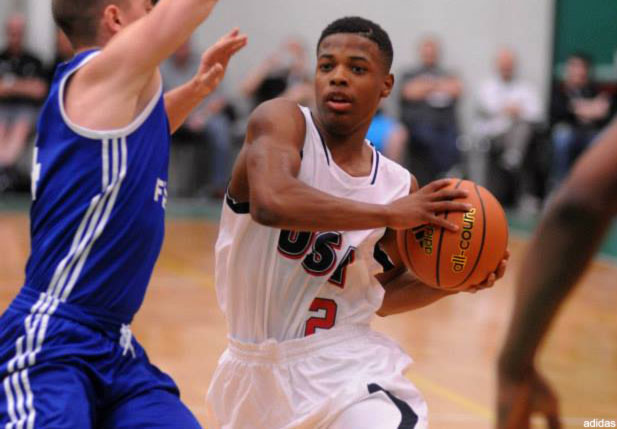 NBA teams are ramping up their emphasis on big, strong, athletic point guards. Russell Westbrook and Derrick Rose added a new element to the point guard position in the NBA with their unearthly athleticism, creating matchup problems in every game they play. NBA teams now have no problem working with non-traditional point guards if they possess elite level physical tools.

Guys like Dante Exum, Marcus Smart and Elfrid Payton all possess “new age point guard” traits, and each will certainly hear their name called on Draft night. The athletic point guard trend certainly does not stop in the high school ranks, and Dennis Smith Jr looks to be falling under that category as we speak.

The North Carolina native enjoyed arguably the most successful spring AAU circuit of any point guard in the nation and saw his recruiting stock skyrocket. When new rankings come out for the 2016 class, virtually every scouting service should have Smith among the top-10 players in the 2016 class. His long-term potential as a prospect, combined with his on-court production, will make him one of the most sought after players in the nation.

Smith joins the long list of Division I prospects who donned the Team Loaded jersey. Program director Ty White has built a well-oiled machine in the North Carolina and Virginia areas, with Smith being the next in line. Smith has been hearing from the likes of Kansas, Duke, Louisville, Florida State, Wake Forest, VCU, and a host of others over the past few months.

“Dennis’ desire to compete on every play separates him from other guards,” explained White. “People kind of look at me funny when I say this, but I think he’s the best point guard in the country, regardless of class.”

Smith possesses all of the physical traits that draw the attention of college coaches. His elite level vertical leap allows him to finish above the big men in the lane, and he constantly draws fouls on his way to the rim. He uses his extremely quick first step to beat his man off the dribble and penetrate the lane. The difference between him and many other athletically gifted point guards is Smith’s vision. Smith knows when to make the right pass and when to attack the rim with aggression, a trait becoming quite rare today. Defensively, his lateral quickness aggravates opposing guards.

“Dennis has the ability to dominate the game in so many different ways,” White said. “Whether it be through assists, scoring, leadership or defense, he finds a different way to win almost every time he steps on the court.”

With the June camp schedule and summer AAU season ready to start up soon, Smith will have players gunning for his position now. His next event of choice will be the NBPA Top 100 Camp in Charlottesville, VA, from June 18-21, one of the nation’s premier camps every year. His Team Loaded squad will compete in the adidas circuit during July and will see plenty of top-notch competition. If Smith continues the tear of elite-level basketball he’s displayed the past few months, not many people would argue with White’s statement about Smith being the best point guard in the country.