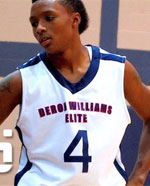 Jeremy Combs’ posterization of an Illinois Old School defender ignited a buzz from other teams lounging on the sidelines awaiting their turn to play. And then 6-4 Emanuel Porter sent the gym into a frenzy after crushing an alley-oop thrown off the glass on a two-on-one fast break.

“It just gives me energy to keep playing harder so I can get another one,” said a grinning Porter, who had another highlight-reel dunk before the game ended.

Whichever teams were watching Deron Williams Elite’s blow-out victory will remember the lone team representing the Lone Star State’s capabilities should they cross paths in the Showcase, which goes through Sunday evening.

But, more importantly for Deron Williams Elite, there were over 100 college coaches watching from above on the track around the perimeter on the second level of the Waukegan Field House who may have taken notice of their team as well. None of the members of the team hold a Division I offer at the moment.

That will change—at some point in the next two years—as the team is predominantly made up of Class of 2014 and 2015 kids playing in the 17-and-under division made up of 2013 players.

“With that, we just try and come out to show age don’t mean nothin’,” Porter stated. “We can compete at any level and with anybody. We just want to compete and win.”

Porter, who attends Lincoln High School in Dallas and will be a junior next school year, has started to get interest from New Mexico and Lehigh but doesn’t have any offers yet. He knows how crucial the live periods are in July in terms of generating interest from DI coaches, but when the ball is tipped he tries to play the same way as he does in a typical game.

“I look up there in the warm ups,” Porter said. “But when the game starts I just try to do my best, play good defense and do what I can to help my team win.”

Much like many of his teammates, Porter is a high-level athlete who is working hard to improve his skills as a basketball player.

“I need to work on more ball-handling and shooting from the outside,” Porter said. “I played both [guard and forward] for my high school team but I really want to be a guard. So I’ve been doing ball-handling drills and working on my shooting form to get my arc up and shot smoother.”

Combs (6-6), a Class of 2014 forward from Dallas’ Carter High, led the way with 16 points and is equally impressive as an athlete with a high motor. Like Porter, the Lobos have showed early interest as well as UT-Arlington—but no offers yet.

Combs is not only trying to continue to make a name for himself, but do his part to represent the man who sponsored the team.

“I’m just coming out trying to play hard,” Combs said. “I’m trying to get stronger finishing around the basket and making my free throws. We’re just trying to represent Deron Williams to the fullest, that’s all.”

Deron Williams Elite will have its work cut out as the 17s division includes powerhouses like King James Shooting Stars (OH), MoKan Elite (MO), Iowa Pump-N-Run, Martin Brothers (IA), Fundamental U (IL), BTi Pump-N-Run (CA) and BTi Double Pump (CA) among a slew of other teams from across the country.

“We go to the hole a lot,” Porter said. “So most teams just try and play zone because they think we can’t shoot. Then the twins and [Curran] will start hitting threes after that. So then they’ll be lost because they can get beat off the dribble or on the three. It’s hard to defend us.”

After their performance Friday, it will be hard to ignore them.