The 6-3 guard is set to suit up for the Florida Gators.

Andrew Nembhard emerged from Room No. 102 below the historic Blake Arena court in Springfield, MA, with a stuffed backpack on one shoulder and a big duffle bag draped over the other. He didn’t appear fatigued or even slightly fazed by the latest, cruising victory for Montverde Academy (FL), but he definitely perked up when he saw a familiar face waiting for him in the crammed corridor.

It was Mary Lalancette, a longtime friend and head athletic trainer for Canada Basketball. She had a gift for him.

So, Nembhard casually set his bags down, took a small box of treats from her, and peeped inside.

Before the baby-faced floor general posted five points, five rebounds, and seven assists in No. 1 Montverde’s 74-48 win over then-No. 20 Mater Dei (CA) at the Spalding Hoophall Classic on Jan. 15, Nembhard’s parents asked Lalancette to give Andrew a treat for him to have on the flight back to Florida as an early birthday present since they couldn’t make it to the game.

And she wasn’t about to forget.

“He’s amazing. He’s a great kid, a solid, sold character person,” Lalancette said. “Along with being talented at basketball, he’s just a phenomenal person as well, which is just great to be around.”

To most, they only know Nembhard as a great player, the 2018 Flo40 No. 22 prospect and a 6-foot-3 Florida signee, who can control any game from the point guard position.

To everyone close to him, they know all about his warmth and compassion, his selfless mindset, his silent competitiveness, and his resiliency to have already overcome some incredibly difficult obstacles before his 18th birthday.

It’s a story in which some of the details will remain in-house but one of perseverance and triumph for one of the leaders on the best team in the country as Montverde heads to the ARS Rescue Rooter National Hoopfest in Tampa, FL, to play Berkeley Prep (FL) on Jan. 20 live on FloHoops.

A year ago, Nembhard celebrated his birthday by dropping 22 points in a big win over Bishop Montgomery (CA) on the same stage in basketball’s birthplace. However, that was the last time anyone really saw of the young floor general on the court the remainder of the season.

First, there was a stress fracture in his foot, which forced him to sit out at least two weeks. Then, he got sick in the school’s dorms in March while Montverde was preparing to make a run at DICK’S Nationals.

Instead of helping the Eagles on the court or playing for UPlay Canada during the Nike EYBL, Nembhard spent time in the hospital and went home to Canada to recover.

“I was bummed I couldn’t be playing on the court with my guys, but, honestly, I was positive,” Nembhard said. “Me and my dad and were the most positive the whole time, always thought I was going to come back.”

“I missed it, but I also just said, ‘I want to take my time so I don’t come back too early and mess up anything for myself,’” he added. “It’s kind of just one little obstacle in my life that I kind of surpassed, so I’m great to be moving on now.”

Not only did Nembhard come back earlier than many, including Montverde head coach Kevin Boyle, expected, but he has also dazzled throughout his senior season, helping guide the Eagles to a 23-0 start and playing at an higher level than ever before with his crafty handles, crisp passes, and improved 3-point shot.

“He’s a big guard. He has got a good body. He’s going to be really thick by the time he gets to college,” Boyle explained. “He’s just such a smart player He controls the ball and the whole game. And when he shoots it good, which he is doing better, you have a guy that wouldn’t surprise me when it’s all said and done if he ends up in the NBA.”

As for doing all of this after what he went through? Unbelievable, but not unexpected.

“He made tremendous recovery from that. I didn’t know if he was going to be able to play this year. And not only is he playing, he’s playing incredibly,” Boyle continued. “I’m telling you, there’s very few people his age as mature and as thoughtful of other people than him, yet he really competes on the court. He’s got no ego. He’s a selfless person.”

Teammate and 2018 Flo40 No. 1 prospect R.J. Barrett added: “We were all scared for him at the beginning. But seeing him come back the way he has, he’s always been a soldier, so I’m not surprised he came back from it.”

Nembhard might not be a McDonald’s All-American — a likely product of him missing so much time in the spring and summer — but he is as tough and talent as any guard in the country, and he came back to prove it by winning a national championship.

“I’m really just much more grateful because it could have ended off so much worse than what really happened so I’m grateful to be playing,” he said. “I cherish it and come with more focus when I play now.

“I think I’m in a better place now than before it happened.”

The scary thing, as he heads into another national showdown back in the Sunshine State, is he is just getting started.

“I think we can show we can bring it to the next level,” Nembhard said.

And what a gift that would be. 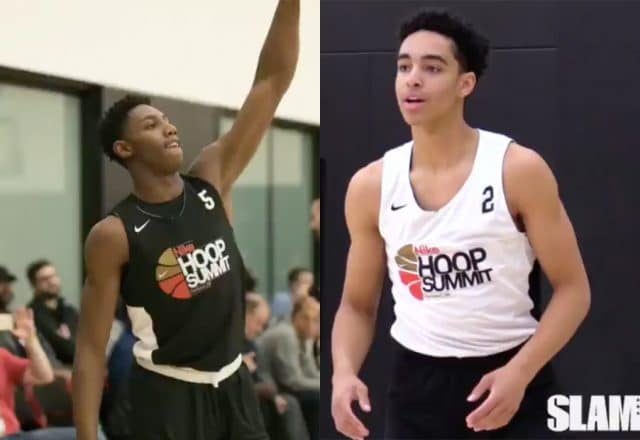