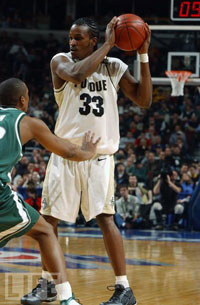 Between shattering his ankle during the AAU season after his junior year and not qualifying for college academically Darmetreis Kilgore could have taken the beaten path that is so often chosen by high school kids who don’t meet their goals. He could have given up on his dreams of playing college—and professional—basketball.

But he didn’t give up.

He kept on working and earned every last ounce of the scholarship that he received to one Big Ten school. A “smooth and tough”

player by his account, Kilgore got the most out of his abilities and is now giving back to the youth of the future.

Enough of our narrative: Here’s his story.

SLAM: After listening to your old AAU coach with the SYF Players talking about the story that changed you, it was inspiring. Can you explain that story in full detail?

Darmetreis Kilgore: Having a late start to my basketball career and going through the heartache of not having my father in my life, I was apprehensive toward new faces. Don’t get me wrong, Coach Brumm presented himself well, but it took me a while to see his intentions. Coach and I didn’t bump heads in a disrespectful manner; I just had other individuals in my ear telling me that I wasn’t getting a chance to showcase my talent and coach was playing favorites. Prior to my ankle injury I had great success with my teammates, but since I didn’t fully trust coach, I put myself in a situation where I had to evaluate the team goals and the expectations I had for my career. So upon my return, I bought into everything Coach Brumm wanted to expedite in my lost time. I was a 16-, 17-year-old kid who started playing basketball in the eighth grade and when all the attention and success started to come, so did the growth of my ego. Honestly, I don’t remember taking a week to get my mind together, but I may be wrong.

It was the first game in the 1998 AAU State tournament and I started the game with 12 points in the first two minutes of the first quarter. My 12th point was a one-handed dunk off the vertical on an opposing player and as I was descending there were players underneath me and my left foot came down on someone’s foot. This was the most pain I have ever felt in my life and I knew my basketball career was going to be put on hold for a while. I truly believe with all my heart that the main reason that situation happened was due to me forgetting who gave me this gift, GOD! Before my success, I was a praying individual that knew none of my achievements would have been possible without my Lord and Savior Jesus Christ. God had to bring me to a place where I had to depend on him and get back to seeking his face again.

SLAM: What exactly happened to your ankle and how did that affect your recruitment? I know big-name schools were involved before it happened and things changed quickly.

DK: Before the end of the summer, I made a full recovery and returned to my faith in God and acknowledging him in everything I do. My ankle didn’t affect my recruitment at all; it was my grades. I didn’t work as hard in the classroom as I did on the basketball court and it cost me looks from Kentucky, Purdue, USC, Cincinnati and Florida.

DK: There are a lot of games being played in the AAU circuit and my theory is these players should not play back-to-back games and they should spread them out in a day. These kids should only be allowed to play twice a day with a few hours between games, just because the game of basketball has a lot of wear and tear on your body and you want to give the players the best opportunity to optimize their exposure to a college or university.

SLAM: Despite your grades, you still ended up going to community college. Talk about that experience and what it did for your psyche going forward.

DK: Attending Tyler Junior College in Tyler, TX was a great move. I didn’t have an offer on the table from anyone after my senior campaign at South Bend Washington High School. I received a phone call from Chris Crutchfield, who was the assistant coach at the time and he stated that they had heard a lot about me and wanted to bring me on an official visit and subsequently, I committed. I knew it was going to be far from home, but it was one of the best decisions I’ve ever made.

My freshman year I made the All-Region team. I averaged 20 points per game and was recognized as one of the top Junior College players in the nation. Prior to my sophomore year I was a pre-season first team All-American and was not only being recruited by several big name universities, but also the Vancouver Grizzlies (who now have relocated to Memphis). I averaged 23 points per game, 5 rebounds, and at least on high flying dunk per contest. Going through the Junior College experience did wonders for my psyche: I was blessed to build a name for myself and have the opportunity to fulfill my dream of making it to the NBA.