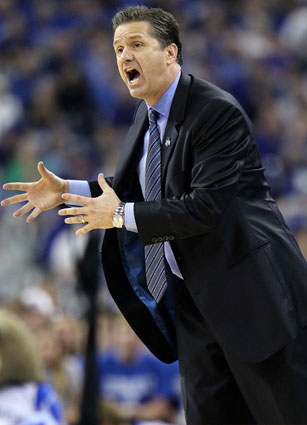 When I was in Lexington in early March working on my Enes Kanter piece for SLAM 150, Coach Calipari invited me to take a tour of the facilities at UK and sit down and rap with him for a bit. It’s pretty easy to see why just about every player in the country has the Wildcats on their list, as their dope Wildcat Lodge (where the players live) and practice facility may very well have the best amenities in the country.

After watching Enes do his thing in front of NBA executives, we chopped it up with Cal for a while. Gotta love how he doesn’t hold back any punches toward the NCAA, keeps it real about DeMarcus Cousins, and gives it to you 100 about Enes Kanter.

SLAM: Tell me a little bit about your experience with Enes in the nine months that he’s been here with you at UK.

John Calipari: If he’s not the youngest freshman in the country, he’s one of the five youngest. He’s the youngest on our team by four months. So you have this big-bodied kid who is basically just a young kid. He works at it, he’s a great kid, and his teammates love him. We had Josh Harrellson offer to give up his senior year for the kid to play. He comes from a family where the father did everything he was supposed to to make sure that this young man could play and the NCAA made its decision early on that this kid was not to play. We jumped all kind of hoops, but this kid was never going to play.

SLAM: You guys got involved with Enes’ recruitment quite late in the game. How did everything come about and get to where things are today?

JC: I got the call from his coach saying that he was interested in us, I didn’t know who he was. I went to see him and I said, Wow. They worked out and played some pick-up at L.A. Fitness, because that’s where they practiced. So then I did my homework. I knew that the club would try to hurt him and I knew that any agents would try to hurt him because that would take away from European basketball. What I found to be true was that his father was trying to do everything that he could to keep his son an amateur. Do we have rules that say, “You’re not supposed to take money from a club,” yet if you take it from an agent it’s OK? They’ll (the NCAA) mitigate if you take money from an agent or booster for that matter, but because it was a club that was giving his father money that included educational expenses, you can’t do that? How would the father know? That was the frustrating thing. We thought that at the end of the day, adults would come together and agree that the intent that the father and this kid had was to be an amateur. There is no question about that. It was hard for this kid to go through all of this when he just wanted to come and get an education and play basketball. His father is a college professor. Enes comes here to UK and does everything that he’s supposed to do academically, comes to every practice, works out individually, and at the end of the day will be one of the very first picks in the NBA Draft.

SLAM: What sort of feedback have you been getting from NBA scouts and GM’s about where Enes will be picked?

JC: They all say that he’ll be right there [among the top picks]. We don’t know who all is coming out, but I don’t think that it matters. This is a young man with great size, who can really run the floor and physically come in and help you right away. His footwork needs to improve. All of the stuff that we weren’t able to teach him through game situations, he’s going to have to learn that. However, you’re getting a skilled, athletic, big kid who can really shoot it, and can make free throws. He’s tough… grabs rebounds with both hands and could go into the NBA right now and rebound the ball. A lot of times you’ll have a good college player who is undersized for the NBA level, or his skill set doesn’t fit his position for the NBA. That’s not the case with this kid. With his skill set and size, he can be a 4 or a 5. If you need to use him as a 4, you can put him in the pick and roll and he can shoot it. If you’re using him in the pick and roll, I don’t know how you can get by the screen. When he screens you, you’re getting hit and then he can step out and shoot it. He’s as good as they get.

SLAM: You’ve had two other big men drafted in the top 5 during your coaching tenure in DeMarcus Cousins and Marcus Camby. How does Enes compare to those two?

SLAM: I saw Juanny (DaJuan Wagner) walking around the facility and had a chance to speak with him for a while. Did you have any idea that he and Enes were actually playing in the EuroLeague at the same time back in ’08-09?

JC: No, I had no idea that they played at the same time.

SLAM: If you ruled the world, how would you change the NCAA’s rules on European players? Also, anything else you’d like to throw in about Enes?

JC: Hes one of the great kids that I’ve coached. When I say that to the NBA guys, that goes a far way. I’m going to be truthful to the NBA guys, but I’m never going to hurt one of my guys. I said that you cannot coach DeMarcus Cousins like he’s 25 years old. He’s 19 years old and you have to coach him like he’s 19 years old. I told those guys that. The European background that this kid has will help him. He played against Jared Sullinger and absolutely killed him….and Sullinger is one of the very best players in college basketball. IT’s just unfortunate. Even if they would have penalized him for the year….sit out this year, and you can play next year. The money that your dad used for education, pay it back. What’s the big deal? I don’t understand. Another kid can take money and pay it back because he didn’t get it from a pro team. I don’t know what the difference is. You took money and knew that you weren’t supposed to take money. The difference is that this kid didn’t know and did everything under the assumption that he was going to stay amateur. I think that Fenerbahce knew that if they gave him any money, they then could say that he’s a pro. I really believe that the club did that. With that said, at the end of the day… the only thing that was hurt in this was our program. It would have no effect on him. He’s still going to be part of our family, he’s still going to practice where pro scouts can see you, and he’s still going to go where he should have in the NBA Draft. You know what, it’s true. This hasn’t hurt him. It’s hurt the nation not to see what a great kid, terrific competitor, and great player that he was. They were cheated too. All of the fans of college basketball were cheated, he was not. He’s not nailed down like Ricky Rubio who owes $6 million to the club. Any young European player has to look at what was done to Rubio and know that this kid has none of that. At the end of the day, it has all played out perfectly.

SLAM: Enes and Ricky Rubio were both acclaimed European stars at a young age and took COMPLETELY different routes, yet things really didn’t seem to work out for either of them…

JC: This is going to work out for this kid. A year from now, you’ll say that as much as they thought that they did something to Enes, they didn’t do anything to Enes. He ended up making the right move by taking the barriers off so that he could do what he wanted with his career. Hopefully the rules will change so that they can never do this to another 17 or 18 year old. Or hopefully the rules will change that if anybody takes money, they will never play college basketball. If you took it, you can’t play. You shouldn’t have these kinds of rules and those kinds of rules. He would have played on the national team and made a million dollars. At the end of the day, the only people that were cheated were our fans in the United States and the fans in turkey who would’ve loved to see him play.