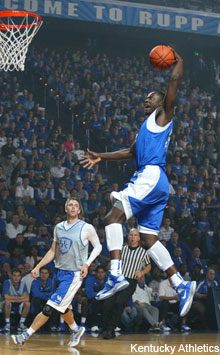 The ’12-13 season could not be summarized as anything less than a disappointment for the Kentucky Wildcats. Nerlens Noel was the best defender in college basketball, only to have his season truncated after a torn ACL.

Reeling in the top recruiting class in the nation and coming off an Anthony Davis-paced chip in 2011, the Cats were expected to be going for two. A 21-12 record and first-round loss in the NIT later, and there was a sense of disappointment, but no worries. Why? John Calipari landed the greatest recruiting class of all time.

“This is an incredible night to celebrate the things that make our program great,” Calipari announced from a makeshift stage on the court. Easily confused with something you’d hear from a politician, Coach Cal captivated the 24,000-plus in attendance, including former players John Wall, Anthony Davis and Tyreke Evans.

With dialogue that not only boasted UK’s successes over the his four years in Lexington, but made it awfully hard for undecided recruits such as Stanley Johnson, Trey Lyles and James Blackmon to vow to play for anyone but Calipari. Elite youngsters Jayson Tatum, Josh Langford, Harry Giles and Eric Davis also made the journey to take in BBM and see the first hand insanity that is Kentucky basketball.

The theatrical performance behind us, there was a 2o-minute scrimmage held that gave us a preview of the new-look Wildcats. There were a lot of highlights, a little bit of defense, and an entire arena of fans who were loving every second of it. The Blue team ultimately ended up with a 65-49 game in the culmination of the UK basketball tip-off celebration.

Here are a few of the standouts:

Leading the Blue team to the W with 14 points, Randle bullied his way to the cup on the regular. He was relentless attacking the rim, finished with both hands, and brought the fans to their feet with a few of his dunks in warmups. Some feel that the Dallas product is right there in the mix with Andrew Wiggins for top pick in the NBA Draft and if UK is able to win the chip as many think they will, just may have the chance to make that dream reality.

Busting out the steel grey Jordan Xs, Andrew had the dopest kicks of any of the Wildcats. He also had some sick takes to the rim, filthy no-look passes, and tough finishes at the cup with both hands. The dribble drive is back for Coach Calipari and it will be Andrew Harrison directing traffic for the ’13-14 campaign.

The scorer of the twins, Aaron Harrison got buckets in an efficient manner at Big Blue Madness. He kept the D honest with his jumper, got to the hole in a few bounces, and showed the he could create his own shot in Cal’s dribble drive. Although Andrew gets a lot of the acclaim, Aaron is just as devastating of a player because of his way to hang points on the board and lock down on the defensive end.

Last year’s walk-on-turned-contributor shocked the crowd with his bounce when he threw down a 360 in warmups. He had a couple of buckets in the scrimmage and while Andrew Harrison will be logging the bulk of the minutes for the Wildcats at point guard, expect Polson to get some burn yet again in his final campaign for the Wildcats and continue to be one of the fan favorites on the squad.