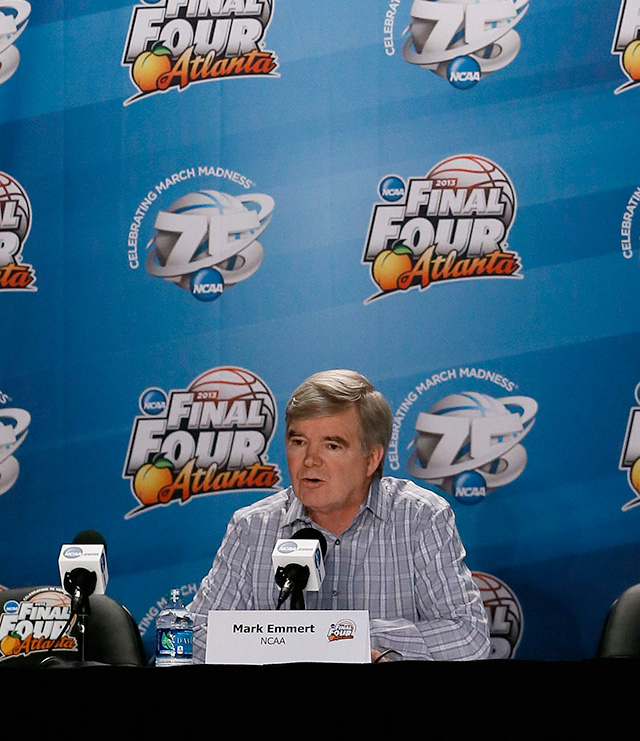 What can we say about the NCAA that hasn’t been said before? That it’s a super-fun organization with beer-pong parties every afternoon and better shoes than Air Jordans?

I doubt that’s been said, because I just made it up. (Though the image of last-century, balding men in business suits raucously slamming Solo cups of cheap beer and chasing ping-pong balls into basement corners is, to this scribe, at least, a highly amusing one.) At any rate, the shoulder-shrugging bureaucrat, Mark Emmert, the man who ostensibly guides the NCAA as its president and main voice, is duller than five pounds of floor lint, and about as creative.

Every person alive knows that elite college athletes are being used, virtually free of charge, to make obscene amounts of money for the NCAA and its backroom pals—TV, advertisers, athletic departments, conference officials, bowl game organizers and whoever else can belly-up to the trough and gorge. Consider that the NCAA men’s hoops TV deal alone, signed in 2010 for 14 years, is worth $10.8 billion.

Forget the two laments Emmert and his like always use to defend the NCAA’s current “amateur” system wherein unpaid DI basketball and football players play more and more high-pressure games for more and more paying customers and gazillionaire coaches. The revenue goes to support all college sports. These are student-athletes, not pros. The players are already paid with scholarships. If we cut athletes in on the revenue, the world will collapse into a fiery orb like a basketball loaded with C-2 and detonated.

I don’t have the space or temper to destroy all these absurd arguments the NCAA uses to maintain the status quo. Just know that I could. And have. For decades.

That’s how slowly the NCAA moves. Indeed, it will do nothing at all until a crisis of morality forces it to. Hey, a possible union for players to address unfair working conditions? “A grossly inappropriate solution to the problems,” Emmert has stated.

Swell, so let’s do nothing while the lawsuits pile up. Great men shape history for the better. Emmert is no great man.

But there is a ray of light here. Northwestern athletic director Jim Phillips was recently named the chair of the new Division I council, a role of serious importance. Phillips, a forward-thinking AD with whom I have discussed many of these ancient inequities, has stated, “There’s no question we’re headed to a better place.”

Do it, Jim. Fast. Because this old place isn’t good.