The fact that South Carolina–the conference’s worst program since 2000–broke through to play in the Final Four this April clearly proves it. Even though South Carolina failed to beat Gonzaga in the semifinals, the Gamecocks’ success was still the story of this postseason.

Still, despite their Cinderella run and the usual deep tears by Florida and Kentucky, the SEC suffers from a lack of national respect relative to other elite conferences. A big reason: Whereas the likes of ACC and Big 12 consistently get at least half of their teams into the NCAA Tournament, since 2009 the 14-team SEC has struggled to get more than four or five teams in per year.

Auburn head coach Bruce Pearl predicts this changes next year. He forecasts six to eight SEC teams will annually get into the NCAA Tournament starting in 2018. We recently spoke to Pearl, a former Tennessee head coach who led the Volunteers to the 2010 Elite Eight, about the conference, his program’s place in it, and more:

SLAM: What do you think of the strength of the SEC as a whole?

Bruce Pearl: Right now you’re starting to see the beginning of some of the fruits of the labor that the SEC basketball team has planted. I’m talking about Mike Slive, Greg Sankey, Dan Liebowitz, Mike Tranghese, Mark Whitehead, the coaching hires and the commitments on campuses. When our third or fourth-best team, South Carolina, can put 65 in the second half on the best program in the country in Duke, it sends a strong message that SEC basketball might be better than what it’s perceived.

SLAM: How can the SEC annually get six or seven teams into March Madness?

BP: We need to win more games in November and December and have more teams in the top 25… When the top of our league gets better and wins, it pulls all those teams in the middle up [in terms of metrics like RPI] and that’s how to start getting six, seven, eight teams in the tournament. 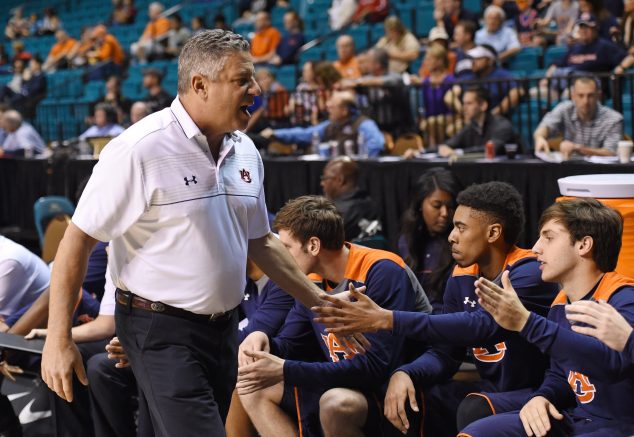 SLAM: What’s your outlook for Auburn and the postseason next year?

BP: For the first time since the Chris Porter Sports Illustrated cover [circa 1999] people expect us to get to the [NCAA] Tournament, and they should… I think it is a very attainable and realistic goal for us to finish in the upper division of the SEC next year based on what I return and what we’ve recruited. We were the only team in the nation last year to finish with its top four scorers as freshmen.

SLAM: Do you think SEC basketball suffers from a general national perception that the SEC is a “football conference”?

SLAM: You told me, in the past, opposing coaches from other conferences used the SEC’s football success to dissuade Tennessee and Auburn basketball recruits. What would they say?

But it’s not true. Our guys get the same respect, the same opportunities, the same adoration.

SLAM: Speak to some of the cultural differences between “basketball conferences” and the SEC.

BP: In November, in so many places around the country in high-major conferences, it’s starting to get cold. They’re ready to get inside and they’re ready for basketball season to start. That’s not the way it is on our campuses in November and even in December. And that’s what gives some of these conferences a head start on us.”

Evin Demirel grew up in football-crazed Arkansas. His gridiron grounding leads him to believe there are better odds for Coastal Carolina winning the 2018 NCAA Championship than the SEC becoming known as a “basketball conference.”