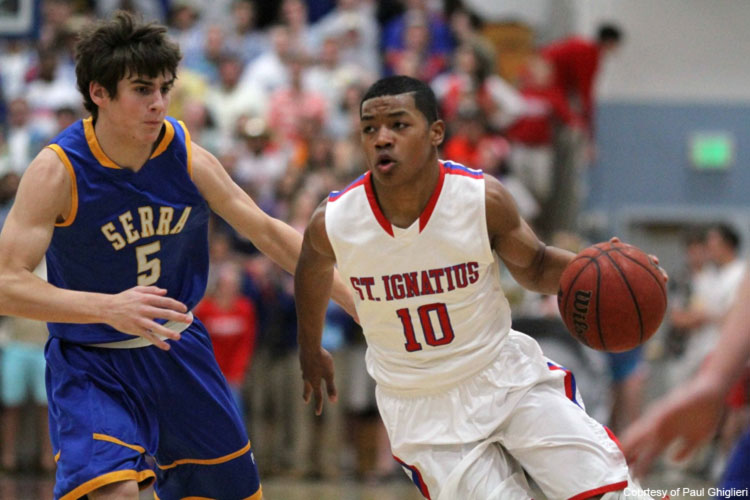 On a recent Thursday afternoon, in a gym not a mile removed from the Pacific Ocean’s windy swill, a well-dressed Trevor Dunbar stood at a scorer’s table next to friends, family and well-wishers to put the finishing touches on a move to play basketball for Washington State next season.

The big announcement had been made four days earlier, when Dunbar revealed on Twitter that he was Pac-12 bound. This ceremony at St. Ignatius College Preparatory’s McCullough Gymnasium allowed Dunbar a chance to say goodbye to the place and the people that had helped him reach this exciting destination point.

On a deviated note, there’s another gym we should reference, one that featured prominently in A Season’s Worth, the wildly popular seven-part series (see: more than a million hits) based on Dunbar’s basketball journey that aired last summer on YouTube. For years, Dunbar has made the short trip to St. Paul of the Shipwreck at any and all hours to pour work into his game.

Ten-thousand hours? Lace that Malcolm Gladwell-ian notion with a raucous adrenaline kick and you get a taste of Dunbar’s drive. Every time he is told that, at 5-8, he’s too short to make an impact at the highest level of basketball, every time some hack of a hater pours bile into a message board comment, Dunbar invokes the greats. He puts his head down and works.

And just to clarify—that ain’t silence. Far from it. It’s the right kind of response.

That level of poise wasn’t lost on those who came into contact with Dunbar at St. Ignatius. To kick off the signing ceremony, athletic director John Mulkerrins said of Dunbar, “Not only have you been an outstanding basketball player in our program, you’ve also been an outstanding young man.”

This was where the all those hours had gradually come to fruition, in what might best be termed a ‘blink’.

The previous Saturday night, upon returning from Grad Night festivities with his departing SI senior class, Dunbar had checked in with the Washington State coaching staff via text message.

Dunbar knew that a scholarship offer had recently opened up after a point guard, once committed to the Cougars, had reneged and opted for a different route. Rumor had it that Dunbar was the next name on the list. The next morning, he woke up, tapped his phone and came across this message, sent from Wazzou.

If we offer you, will you come?

“I was like, Yeah,” Dunbar says, laughing. “I had visits set up to St. John’s that Monday, and I was ready to look at Maryland and Towson too, but [Washington State] was just the best fit. This way, I get to stay on the West Coast.”

That the reaction to Dunbar’s commitment triggered a seismic spike of responses on Twitter should give you a sense of his local celebrity, which has reached the point where his highlight reels on YouTube become hotly anticipated events. (They’re worth a gander.)

These vids are a showcase for Shift Team, a movement begun by Dunbar that is dedicated to players who showcase a certain level of on-court swag and smooth. Dunbar was the ringmaster, darting this way and that like a record continually skipping. Defenders never quite seem able to catch his beat.

Despite all the internet clicks (Kyrie Irving is a frequent collaborator on Twitter, and a member of Shift Team) high-major scholarship offers were slow in coming—until new Washington State coach Ernie Kent extended his hand to Dunbar (since the late signing period had already passed, Dunbar signed a Financial Aid Agreement).

Tim Reardon, Dunbar’s coach at St. Ignatius, shared the befuddlement of many that this jet-quick guard was forced to endure such a taxing, and at times nerve-jangling, wait. Few know Dunbar better than Reardon, who returned from a brief break from coaching basketball (he’d been head coach of the SI varsity from ’03-08) just as Dunbar was beginning his freshman year in the fall of 2010.

Reardon coached the Wildcats’ Freshman A squad, which included Dunbar, and has enjoyed a first-hand, four-year look at Dunbar’s transformation from talented ballhandler into complete floor general. Reardon returned to the varsity coaching position in 2011-12, and took Dunbar along with him. “No [team] pressed me during my last four years of coaching at SI,” says Reardon. “He came in with the skills, and he just had a great feel for the game. So it was more about understanding tempo, not having a pissing contest with the other point guard and just knowing what he can do.

“Now, he’s grown in his understanding of time and score and he’s become very good in the last two minutes of games. In his first two years at SI, he couldn’t do that yet.”

So it went this senior season, when Dunbar averaged 22 points, 6 assists, 5 rebounds and 3 steals and was named the West Coast Athletic League and Central Coast Section Player of the Year. “If you watch tape from one of my teams before he got here, it looks like a completely different sport than what we did with him,” Reardon says. “We changed things up quite a bit for him—we just had to give him ball screens and let him try to create.”

It didn’t hurt having the likes of Julian Marcu and Troy Rike, both good friends of Dunbar’s, on varsity, either. When a dizzying variety of no-look passes are in play, familiarity becomes tantamount.

Despite these dazzling displays, however, the high-major collegiate interest remained tepid at best. “I think it was about his size,” says Reardon. “If they got to see him in the [San Francisco] Pro-Am, they would’ve had a great idea that his size doesn’t affect him when he’s out there. The early knock on him was that he couldn’t shoot, and he ended up shooting 40 percent from three (his senior) season. He doesn’t turn it over. So it had to be about his size—that’s the only way I could figure it out.”

Even when Dunbar was lighting up teams—he dumped 40 points on WCAL rival Serra—Reardon never got the sense he was pressing. He did what needed to be done to win games. “You see guys trying to do too much when they’re in that situation (looking for a scholarship offer),” says Reardon, “but I never got that sense from Trevor. He wasn’t trying to showcase himself. He put the team first.”

As the season ended and spring began, Dunbar couldn’t go through the H-shaped hallways at SI without someone asking where he was headed next season. “It was definitely stressful,” says Dunbar. “My dad was a bit more stressed than me, because I was always planning on hopefully finding the right fit.”

In early May, Dunbar was invited to the BallisLife All-American game, where he went toe-to-toe with heralded point guard Tyler Ulis, a Kentucky commit. Still, Dunbar kept his collegiate plans close to the chest. Some in the Bay Area felt sure he’d head to City College of San Francisco to play for Justin Labagh, who has sent a number of players to top DI schools, including Utah’s Delon Wright.

Then the floodgates opened. Ernie Kent took the Washington State job on March 31, and just after two months, he’d picked out the point guard with whom he wanted to begin a process of revitalization. In 13 seasons at Oregon, Kent coached the likes of Luke Ridnour, point guards renowned for playing with some serious moxie.

“Coach Kent loved my game, and he didn’t want me to change anything about it,” Dunbar says. “He’s had a lot of success with smaller guards, and on a long phone call that we had, he brought up [Tajuan] Porter and Aaron Brooks (both of whom Kent coached at Oregon). I’ve watched Brooks on the [Houston] Rockets. It gives me hope for that next level.”

Before you sniff at any talk of the NBA, remember that few thought Dunbar would end up in the Pac-12, either. Competition doesn’t faze him. For the past two summers, Dunbar has gone toe to toe with NBA and professional talent at the San Francisco Pro-Am, frequently cited as one of America’s premier summer leagues. He’s taken the court with Matt Barnes and Jeremy Lin. And not blinked.

“I’m not killing ’em, but I’m out there on the same floor as them and I look like I belong,” says Dunbar. “It’s an honor to be out there.”

On June 22, Dunbar headed to the Palouse to begin summer school and off-season workouts. He’s close with his fellow incoming freshmen, including guards Jackie Davis and Ny Redding. He still has the numbers of current roster members, whom he met last summer on his unofficial visit. (Ken Bone was head coach then.) “I’m really excited to get started and see what this season’s got for me,” Dunbar says. “Pullman is this big college town, and that’s different from the City life, but I think that’s going to be a good environment for me.”

As Kent told Washington State’s official website, “Trevor is an outstanding young man that has spent an enormous amount of time refining his game, which will show in his ability to handle the basketball and see and make difficult plays. He has a certain style and flare to his game that will quickly unite and excite our student body when it has the opportunity to see him play. I look forward to coaching Trevor.”

With that ceremony in St. Ignatius’s gym as evidence, Kent should have a blast. After thanking a lengthy list of people for their contributions on his journey, Dunbar read a brief statement he’d prepared, detailing his intentions at Washington State.

The third one is sure to raise eyebrows. Washington State has made just one Final Four in its history — and that was back in 1941. They finished 10-21 last season, notching just three victories in Pac-12 play.

But while you stand there agape, Dunbar is busy listing areas where he can improve his game. He wants to help Kent reinvigorate basketball in the Palouse, which enjoyed a mini-heyday under Tony Bennett as recently as the mid-aughts. With the likes of senior swingman DaVonte Lacy (19.4 points) still on the books, Dunbar will have some fun running mates when he gets out on the break. You get the sense that during Dunbar’s four years in Pullman, things could get re-routed on an upward track quite quickly.

Dunbar likes where his jumper’s at, but he’s ready to bolster his defense. He knows he’ll play against bigger guards in the Pac-12, and he wants his defense tenacious, so he can hang on pick-and-rolls.

He’ll trade the fog for snow, and lots of it. He welcomes your skepticism. So far, he’s got a pretty good record of proving people wrong.

“I just felt like he deserved this,” says Reardon. “It’s a relief, knowing he’ll be playing where he deserves to be playing.” 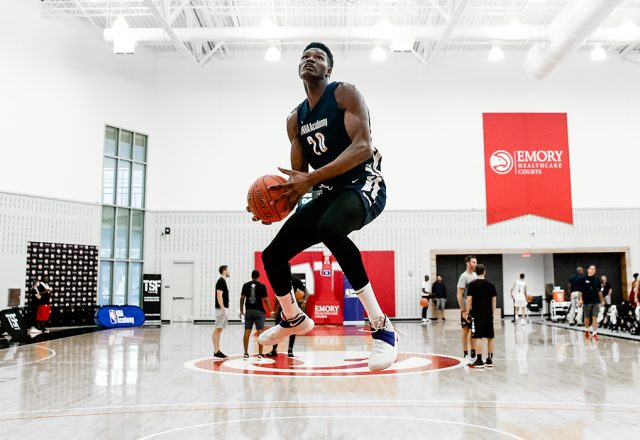 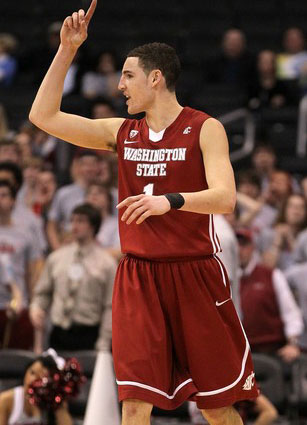