Eastern Washington guard Tyler Harvey is one of the country's best scorers. 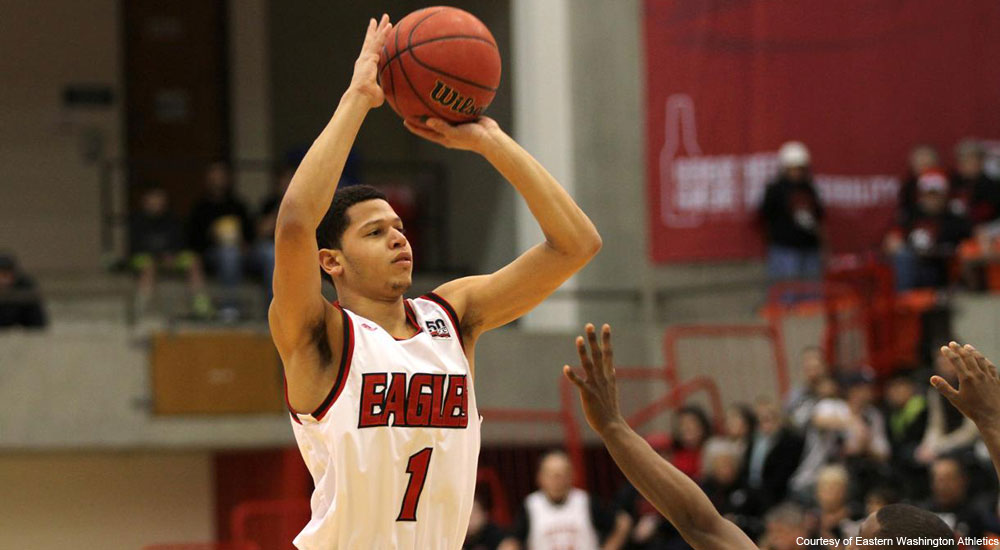 Word’s getting out about this high-scoring guard for a school in Cheney, WA. So, here come the comparisons. This offseason, the Eastern Washington coaching staff came across a piece that labeled Eagles redshirt junior Tyler Harvey as “Damian Lillard 2.0.”

The reference fits—well, at least in part. Harvey shares a similar prep route with Lillard—lightly recruited, ended up at a Big Sky Conference school (Lillard starred for Weber State before becoming one of the NBA’s brightest young stars). Both are scoring guards with a habit of filling up the rest of the stat sheet.

As an interview wound down last Wednesday morning, Eagles assistant coach Shantay Legans had a request.

See, Harvey is a huge fan of a certain sweet-shooting, all-everything NBA guard. Only, it isn’t Lillard.

“If you could get Steph Curry to give him a shoutout, I think Tyler would pass out. It’s literally fandom,” Legans said, with levity.

Harvey has parsed every particle of Curry’s extraordinary rise, from out-of-nowhere NCAA Tournament savior at Davidson to current NBA superstar. For Harvey, it’s the well-roundedness of Curry’s game, more than dude’s current fame, that intrigues the most. Like many players—well, in this case, a bit more than most—he is amazed by Curry’s ability to exploit the merest sliver of space.

That affinity with the Purple and Gold stems from Harvey’s Southern California roots. The allegiance to Steph arises from empathy with his journey.

Last season, Harvey led the Big Sky Conference with 21.8 points, and ranked among the nation’s best in both three-point field goals per game (3.52) and three-point percentage (43.3 percent). He sank 90 percent of his free throws. This is the same kid who couldn’t catch a whiff of a DI scholarship coming out of Bishop Montgomery High, in Torrance, CA.

That had to do partly with an uncommon growth rate. Harvey entered high school as a 5-2 beanpole, before growing 11 inches by his senior year (he’s currently 6-4). The acceleration became so rapid that he had to sit out part of one season, to allow his body to catch up.

He asked Harvey if he’d like to come along as a walk-on with a promised scholarship at a Division I school.

So it went during his first year at Eastern, which he redshirted. Still just 150 pounds, he worked with the Eagles’ strength and conditioning coach to add muscle. He hoisted jumpers on repeat, looking to quicken his release.

“My recipe is to recruit overachievers,” says Hayford. “Guys who aren’t satisfied with the status quo, and push themselves to be the best. With Tyler, there’s no quit in him, anywhere. You go all-in with a kid like that.”

Legans’s office became a haven of sorts. They talked about the chip on his shoulder, how Harvey kept track of the players he’d gone up against in high school. They were getting love, while he was working in radio silence. “He got looked over, and he remembers that,” says Legans.

Harvey found solace in work. Most afternoons, or evenings, or wee small hours of the morning, when Harvey isn’t bolstering his 3.8 GPA, he can be found in the gym. If he’s too sick to play, he’ll be in Legans’s office, watching film. And when Harvey watches film, he sees everything. When I drove into the lane on that last play, I missed an open teammate on the perimeter. The next game, he’ll make that pass.

Back to film. When I came off that screen, I rushed my shot. Next time out, he’ll create separation from his defender, then rise up. “He’s one of those guys that can pick any thing up he sees, and implement it the next day,” says Harvey.

On quick turnarounds: In Eastern’s exhibition game, Harvey finished with 7 assists. But he also had 7 turnovers. “I was making boneheaded mistakes, stuff I shouldn’t have done,” he says. So, he went to the tape. He watched each turnover with Legans, “at least 100 times,” to the assistant’s reckoning. The bad habits that led to mistakes were quickly excised.

In the next two games, Harvey committed just one turnover in 75 minutes. He’s more than doubled his assists from a season ago. And after each game, he’ll head to the weight room. “He’s wiry strong now,” says Legans of Harvey, who clocks in at 185 pounds. “He’s not gonna get pushed off his spot on the court.”

The increased strength is part and parcel of Harvey’s astounding start to this season. Through the first three games, he was better from beyond the arc (15-26, 58 percent), than he was from the field (57 percent). In a November 23 road game at No. 22 SMU, the Mustangs, fully aware of Harvey’s shooting prowess, ran him off the perimeter. So, Harvey got going with some tough finishes off the bounce, in traffic. Hayford’s offense blurs the guard positions, with relentless movement and dribble-weave action, so Harvey is known around Cheney as a “1.5 guard.” He can run point or work off the ball.

The tough thing about guarding a shooter like Harvey, explains Legans, is having to chase him off screens. “But,” Legans notes, stipulating one of the things that separates Harvey from the typical top collegiate shooter, “Tyler can handle the ball. When he comes off screens, he can facilitate or shoot the three at a high percentage.”

In the second half against the Mustangs, he found his space and hit 4 threes—including a pair in quick succession that brought the Eagles within five points with just a minute, 20 seconds to play. In the eventual 77-68 loss, Harvey finished with 24 points, 4 rebounds and 4 assists.

“The neat thing,” says Hayford, “is Tyler’s mindset, as he’s starting his junior year, having led the Big Sky in scoring, is just as hungry as that desire he had three years ago, when he wanted to prove he was a DI player.”

Ergo: the 10 missed threes, and those three missed free throws, and those three turnovers against SMU will be addressed—likely, as soon as Harvey got on the flight to Indiana, where Harvey dropped 25 points in the Eagles’ 88-86 upset over the Hoosiers on Monday night.

“I have really high expectations for Tyler,” says Hayford. “After he finished his freshman season so strongly, I coached him to be the best guard in the Big Sky. Now the challenge is to have him considered as the best mid-major guard in the country.”

Those expectations coincide with increased ones for Eastern. The Eagles finished ’13-14 as the winningest team in 26 years not to make the Big Sky conference tournament. (The Eagles finished eighth; only the top seven teams go, and that seventh-place team, Sacramento State, which finished with a matching 10-10 conference record, got in thanks to a tiebreaker on the final day of the regular season.)

This past offseason, Harvey says the entire team stayed on campus to prepare for a run at a first NCAA Tournament bid since ’04. “We knew our goals, how we’d felt at the end of last season,” he says. “We’re older and more mature, but we have to prove it.”

A final note toward Steph Curry. Legans will sift through NBA rosters and marvel at the number of players with similar paths to the Golden State guard. Guys who didn’t have renown given to them. How that made them work harder than hell to get it.

In an age where hype comes cheap, maybe that ain’t such a bad thing. 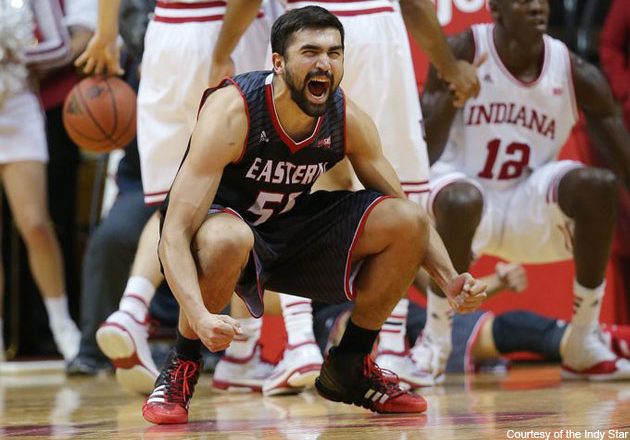