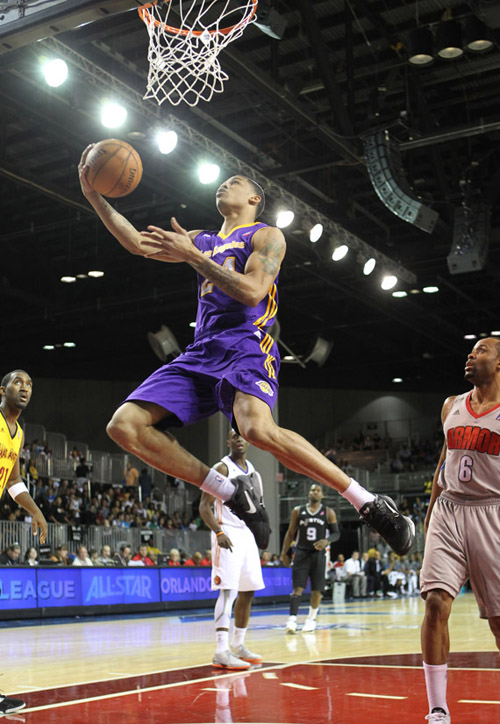 The players of the NBA Development League tend to go unnoticed from our mainstream perspective, but on Saturday afternoon in Orlando, twenty of the league’s finest took center stage for the 2012 D-League All-Star Game, presented by 26 Seconds. The West All-Stars pulled off the narrow defeat of the East with a final score of 135-132. A tale of two halves, the game broke open into an exhilarating exhibition in the second half with dunks and long-range daggers galore. Gerald Green of the Los Angeles D-Fenders, took home the MVP honors with 28 points on 10 for 17 (59%) shooting.

League President Dan Reed deems his players as the best basketball talent in the world outside of the NBA. The Development League represents a unique opportunity for athletes on the cusp to sharpen their skills and acclimate themselves to the rigors of NBA life. Moses Ehambe of the Iowa Energy (24 points) says playing in the D-League is a much better avenue into the NBA compared to playing overseas. “We’re right under the NBA’s nose,” he said.

Today’s game, featuring eight players with NBA experience, typifies the wealth of talent in the D-League. Amongst these 20 players, there is a full gamut of reasons and circumstances as to why they ride the bus instead of flying private. Blake Ahearn of the Reno Bighorns, who co-anchored the West’s strong finish with 18 second-half points (21 points, 8 assists), leads the league in scoring with 24.4 points per game. A five-year D-League veteran, Ahearn displayed adept court vision and a crafty ability to finish at the rim. Whether concerns about his size, speed, point guard readiness, or simply a coincidental shortage of opportunities, it is difficult to fathom how Blake Ahearn has yet to stick with an NBA franchise.

Players in the D-League are not mopers, or demoralized by any means. Each day without a call-up provides new motivation to run harder, rotate faster, box-out stronger and prepare more meticulously. The first half of Saturday’s game was low-scoring and very tight (56-54 West) for an All-Star Game, signifying the importance of this showcase. The game opened up in the second half, but the defense was noticeably aggressive throughout.

Although each player is working tirelessly to elevate themselves as individuals, there was no overt selfishness. The brotherly camaraderie was prevalent, particularly during the half-time Slam Dunk Contest; these men are united through their common struggle to reach the next level.

A surprising member of this Development brotherhood, MVP Gerald Green was selected 18th overall in the 2005 NBA Draft and this game marks an interesting apex on his career journey. In his post-game comments, Green spoke openly about immaturity that hindered his NBA ascent. Time spent overseas and in the D-League has given him a renewed sense of gratitude for the opportunity to play the game at the highest level. Green’s game is more refined and well-rounded outside of the capacity for flight he was once only known for, and he is now mentally prepared to succeed as a professional.

The D-League stands to benefit immensely from Linsanity, as Jeremy Lin provides a striking example of how hard work in the shadows eventually pays large dividends in the forefront. Lin, formerly of the Reno Bighorns, is the only player to ever win Player of the Week honors in both leagues. President Reed emphasizes that roughly 20 percent of the NBA’s players (96 alumni) have passed through the D-League in their career. As more players choose to earn their stripes in the states, this league will grow exponentially as a fertile breeding ground for tomorrow’s NBA stars.

Former UConn Guard Jerome Dyson, currently leading the Tulsa 66ers in scoring, is making the best of his three years in the D-League. Dyson is working to become an NBA-caliber point guard and floor general after playing shooting guard throughout his career, an extremely difficult transformation. Furthermore, he says that this time has helped him develop as a person, on and off of the court. Transitioning from the national spotlight in Storrs to the D-League underground grind was humbling, and he has learned the value of hard work and preparation toward achieving one’s goals.

I asked Dyson about a back-up plan if basketball doesn’t pan out; he said that he does not have one. Dyson says that he is “close” to making the NBA. I have to assume that every D-League player who is going out every night, hustling for their livelihoods, their families, and the pursuit of their dreams, would answer the same exact way.

Christian Wise is reporting from Orlando as an Alumni Ambassador of the High School of Sports Management in Brooklyn, NY. Wise is a member of the Black Market Collective, an urban think tank for social change. Their first involvement is with Sneakers for Success, an educational non-profit.