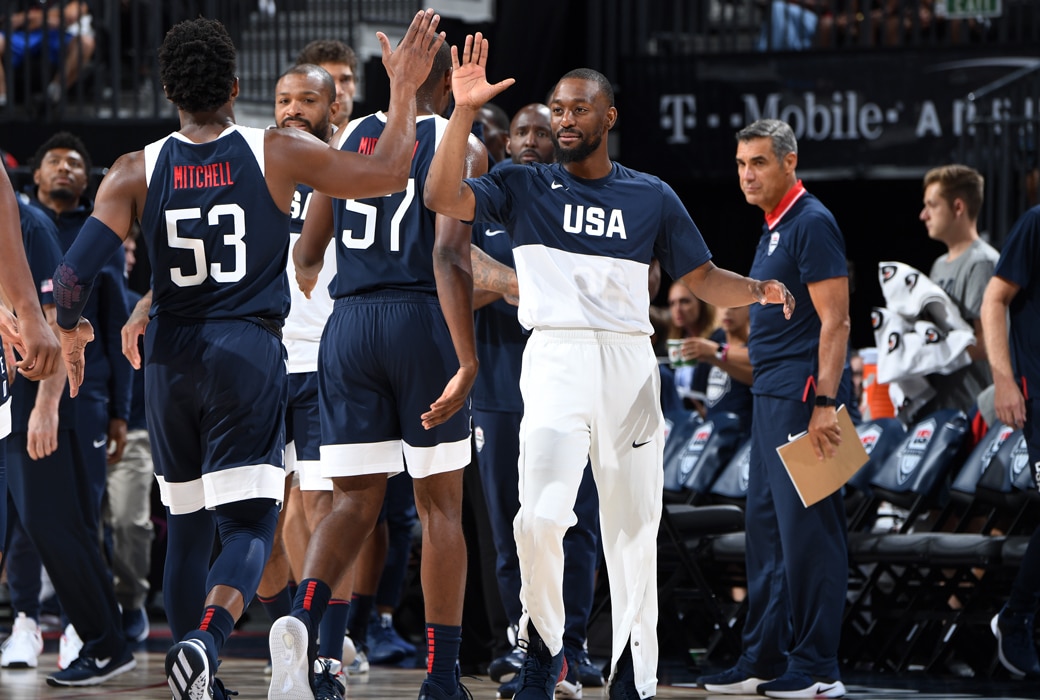 The 18th edition of the FIBA Basketball World Cup will be the biggest yet.

In just a few days, the tournament will kick off in China (a first-time host) with a record 32 teams. Seven are from the Americas, eight from Asia and Oceania, five from Africa and 12 from Europe. Over 16 days (Aug. 31-Sep. 15), 92 games will be played in eight different cities: Beijing, Shanghai, Shenzhen, Wuhan, Dongguan, Foshan, Nanjing and Guangzhou.

The participating countries were divided into eight groups during a live draw back in March:

These teams will matchup in the first round of the tournament, spanning from Aug. 31-Sept. 5. The top two from each group will then advance to the second round, where they will be coupled with two other teams from a separate group. Once again, the pool will be cut in half before the quarterfinals, which begin September 10. The bracket then becomes single elimination up until the championship (September 15) in Beijing.

Seven countries (two from the Americas, two from Europe and one each from the Africa, Asia and Oceania regions) will qualify for the 2020 Olympics in Tokyo based on the results of the World Cup.

Here are seven storylines to keep an eye on this year:

With big names like Anthony Davis, James Harden and Damian Lillard dropping out of the pool, the question remains: Who will be the leader of Team USA? This is the final roster:

Seven of those have Team USA experience, having thrived on the junior level. Kemba Walker was named MVP of the FIBA U18 Americas Championship in 2008 and is likely to take on another big role with this squad. At 29, the three-time All-Star is a veteran presence and perhaps USA’s best overall playmaker. Walker, who signed with the Boston Celtics this summer, is coming off the best year of his career, in which he averaged 25.6 points, 5.9 assists and 4.4 rebounds per game.

“This is like a once-in-a-lifetime opportunity for a lot of us,” Walker told reporters after a practice in Las Vegas. “I think a lot of us are happy those guys pulled out. This is our chance to get on the big stage and showcase our talents. It’s a chance for us to do something new, to be a new-look team.”

Both Utah’s Donovan Mitchell and Milwaukee’s Khris Middleton are used to carrying significant scoring loads. Mitchell averaged a team-high 23.8 points per game in 2018-19, while Middleton, a first-time All-Star, posted 18.3 points on 38% shooting from three.

Tatum and Brown have shown incredible potential and are looking to further prove themselves after a rocky overall season in Boston. The World Cup provides their first platform.

And of course, head coach Gregg Popovich and assistant Steve Kerr will be stabilizing forces. This will be Pop’s first time at the helm, as Mike Krzyzewski recently stepped down after 12 years with an 88-1 record and five gold medals.

Four Celtics—Walker, Tatum, Brown and Smart—are headed to China. That core has already spent ample time bonding, on and off the floor, at training camp and during exhibition tours.

“Obviously me, JB and Smart got a lot of chemistry, so now we’re trying to add Kemba and get him acclimated,” said Tatum. “Dinners—things off the court are just as important, so we’re starting that early this offseason.”

We’ll get a chance to see how Walker gels with some of his new teammates in live, competitive action. And the fact that they have the next month or so to get to know each other better, things should be a lot easier when the NBA season comes around.

“I would exchange the MVP title for the World Cup title in China.” – Giannis Antetokounmpo

Along with his siblings Thanasis and Kostas, the Greek Freak will proudly represent his country in the upcoming World Cup.

“It is an incredible feeling that all three of us are together,” Giannis told FIBA. “We have worked very hard to get here and to achieve this. That’s why I know that our mother is proud, as is our father, who I’m sure is watching us from the heavens.”

From being named Most Valuable Player to getting his own signature sneaker from Nike, this has been the summer of Giannis. He’ll become the first player to compete in the World Cup right after winning MVP. He was back in Greece with his family promoting the Zoom Freak 1 not too long ago and the support was incredible.

Together, the Antetokounmpo brothers are hoping to dominate Group F (Greece, Montenegro, Brazil, New Zealand) and make some serious noise in the tournament.

Former Gonzaga standout Rui Hachimura made history in June, becoming the first Japanese player to be selected in the first round of the NBA Draft (No. 9 by the Washington Wizards). He’s already a hero back home and will now try to guide his country as far as he can through the World Cup. Tokyo is hosting the 2020 Olympics, so Rui figures to remain in the spotlight for awhile.

“I think 2020 will be another landmark opportunity to make basketball popular in Japan, and I think Rui will have a big part in that for sure,” Gonzaga’s team video coordinator Ken Nakagawa, whose parents were both Japanese, told SLAM.

It all starts this summer. Just how special is the soon-to-be face of Olympic basketball? The 6-8 forward will have a major opportunity to show out when Japan plays USA on September 5th, the final day of Group E competition.

5. The Group of Death

Only two teams from a stacked Group H (Canada, Senegal, Lithuania, Australia) can advance to the second round.

“With the team that we’ve got, that we will have, we’re going to be confident. We believe. Even the last couple of tournaments we’ve been to, we were right there,” Ingles told FIBA. “For me and our team, when we play for our country, we take tremendous pride in that. We’re not representing one person, we are representing 23 million people or whatever we got in Australia right now.”

With the Joker ascending into a superstar, Serbia is slated as the second favorite to win the World Cup behind the United States and far ahead of Spain at No. 3, per Westgate Superbook.

Serbia locked up silver at the previous World Cup in 2014 (without Jokic) and at the Olympics in 2016 (with Jokic). They seem like a good bet to reach the podium once again and are the most likely team to give USA trouble.

“Let’s let [Team USA] play their basketball and we will play ours and if we meet, may God help them,” coach Sash Djordjevic said during an interview with Serbian national television, per Mozzart Sport.

The Argentinian power forward will be playing in his fifth FIBA World Cup, dating back to 2002. As of right now, Scola is third in total points scored in World Cup competition, just 21 shy of Australia’s Andrew Gaze at the No. 2 spot.

Scola recently guided Argentina to a championship at the Pan American Games in Peru, dropping 28 in an 84-66 victory over Puerto Rico in the Finals. It was the fifth major honor the big man has earned with the national team, including Olympic gold in 2004, the FIBA Diamond Ball in 2008 and two FIBA Americas Championships in 2001 and 2011.

Throughout July and August, much of the conversation about the World Cup has centered on guys deciding not to play, such as AD for USA, Simmons for Australia and Jamal Murray for Canada. Scola’s story is the complete opposite. He’s participated whenever given the opportunity and at 39, ten years older than anyone else on the Argentinian team at the Pan-Am Games, is still going strong.

For more news and information, head to the FIBA website.