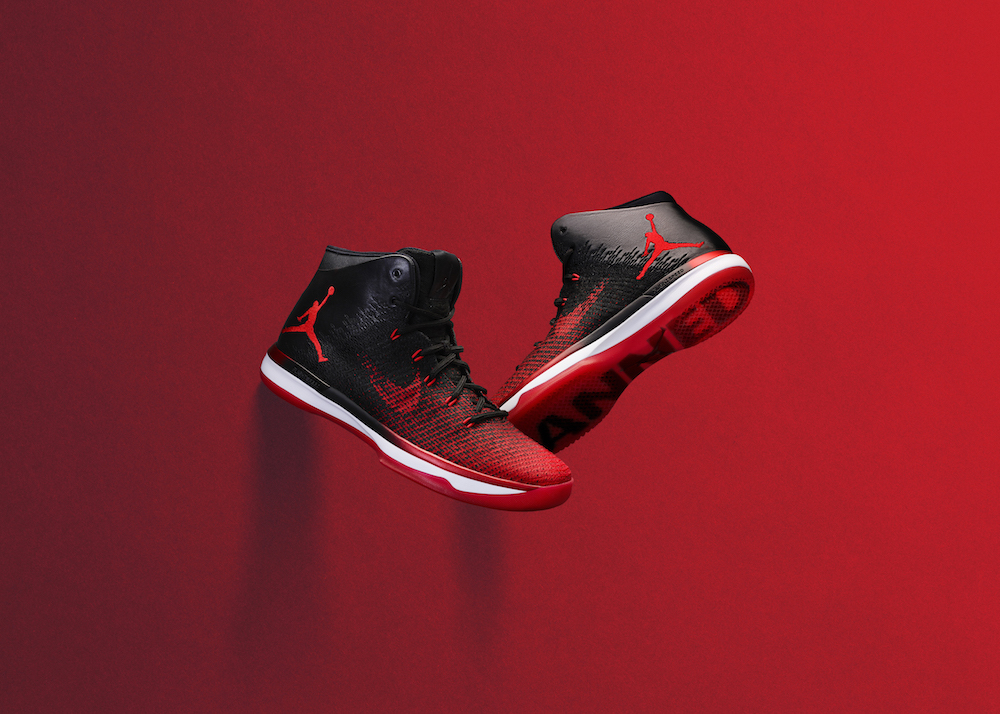 Jordan Brand officially unveiled the Air Jordan XXXI today in Las Vegas, with a little help from Russell Westbrook, the man who will be the leading face of the sneaker this season.

Scroll through the photos above for a closer look, and read below for more details from our friends at Jordan:

Defiance is at the heart of Michael Jordan’s success. Throughout his career, the champion faced hurdles — injury, repeated defeat, illness — and continuously soared above them to realize the unexpected. Along the way, he redefined basketball’s relationship to style, the sport’s connection to youth counter-culture and the game’s creative potential.

When Jordan’s footwear arrived during his rookie season, it shared with the world some of its namesake’s tradition-breaking bravado. A black and red colorway violated the league’s uniform policy, earning a stern letter from league officials and generating a $5,000 fine each time the player wore the shoes on court. “Around this time, if you knew anything about Nike…Nike stood on this kind of rebel behavior,” recalls Jordan Brand VP Howard “H” White, in reference to the runners and tennis players connected to the Swoosh. “This Jordan, that color of the Air Jordan I, kind of galvanized that universal scope.”

“The shoe represented that spirit that he brought to the basketball court by being so different,” adds Larry Miller, President Jordan Brand. “Michael kind of threw the rules out on how you were supposed to play the game. The shoe kind of threw the rules out on what a basketball shoe was supposed to be… People who weren’t even into basketball found out about the shoe and it became this catalyst for where we are today.”

The Air Jordan I set the tone for Jordan’s future, and his eponymous brand, transcending the court and finding favor across a broad spectrum of society, even with, as White reminds, skateboarders. “You just can’t make those stories up,” he says. “If somebody said, ‘Hey, here it is: Take the pen, take the pencil and draw it up just the way you want it,’ you probably couldn’t have drawn that up the way it came out.”

The Air Jordan XXXI represents a balance of Jordan Brand’s tradition of game-changing performance and its transcendent style: lightweight support for the world’s highest-flying athletes, including Russell Westbrook, and rich material details that exude an off-court sensibility.

The shoe’s first-of-its-kind Flyweave and leather upper incorporates a number of iconic Jordan elements, reintroducing the original Air Jordan “Wings” logo and a subtle Swoosh — not seen on a Jordan shoe since the Air Jordan I and the first time it has appeared alongside a Jumpman logo. And in its launch colorway the Air Jordan XXXI pays homage to the “banned” story.

“I think the spirit these shoes represent is a feeling of defiance. You know, you see the poster of MJ dunking with his gold chain, up in the air forever and defying gravity, wearing the Air Jordan I; you just can’t stop looking at that poster,” says Jordan Senior Designer Tate Kuerbis. “I think recreating and getting that feeling into a new game shoe is challenging, but it’s one of the things we wanted to do — instill this almost magical quality.”

Informed by Jordan himself, the Air Jordan XXXI also follows on a tradition of low-profile cushioning. “He needed to feel closer to the floor — that was his thing,” recalls White of the origin of Jordan’s desire for low-to-the-ground sole units. As such, the Air Jordan XXXI features FlightSpeed technology with full-length Zoom Air that enhances court feel, responsiveness and lateral support. “We really wanted to focus on propulsion in the forefoot, so when you’re coming down you’re engaging the FlightSpeed with the Zoom Air bag,” notes Kuerbis.

“With the Air Jordan XXXI, we celebrate the risks and rewards of Michael’s career and look forward to a future of continued innovation,” says Larry Miller. “The Jordan Brand story is a testament to Michael’s enduring cultural capital and undeniable performance legacy.”