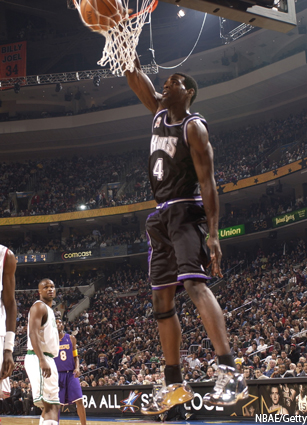 Chris Webber represented a handful of sneaker brands during his 15-year NBA career. He began with Nike, teaming with David Robinson to wear the Nike Air Unlimiteds before switching to his signature Nike Air Max CWs, then moved on to Fila, AND 1 and Reebok before retiring in 2008. But most notably, though, C-Webb made a ton of shoe-related headlines for his time spent as the President of DaDa, the apparel/kicks company he repped from ’02-03. (The chrome DaDa Supreme CDubbz he wore during the 2002 All-Star Game are, for better or worse, undeniably legendary, so much so that the company felt the need to re-release them in early 2013.)

During a break in an NBA on TNT telecast in New Orleans, Webber—who now works as an analyst for Turner Sports/NBA TV—sat in a hotel suite and spoke candidly about his sneaker history.

SLAM: DaDa rereleased the infamous Supreme CDubbz last year. Did you have a part in that?

Chris Webber: I knew about it. Hopefully there’s something a little more special with a remix next year. I’m releasing a book next year, so it’d be nice to release a shoe with the book or something like that. I don’t know if Nike’s investing, but I’d love to have my shoe re-released.

SLAM: Do you have any say in that?

SLAM: You had a pretty big role with DaDa during your playing days, right?

CW: Yeah, when I signed with DaDa I actually ran the company. We set some pretty big earmarks that year—I had the chrome shoe that did really well for DaDa. But I told them when I left that it was gonna end—not ‘cause of me. But I’m a fan of basketball and shoes, and you gotta listen to the fans with shoes, and I think they stopped listening to the fans. I was gone two or three years before all that.

SLAM: Do you have any specific sneaker memories that you cherish?

CW: The first shoe that I wore in the NBA was the shoe that David Robinson and I had together (the Nike Air Unlimited). Then I just remember being excited showing people my shoe (the Nike Air Max CWs). Putting it on my desk, looking at it. As a player you always dream of having your own shoe, and I remember how hard I fought to keep them low-tops. Back then they wanted everybody to have high-tops, and I was like, Guys, I gotta wear my shoes with my jeans. So mine were low-tops, and yeah, I loved ‘em.

SLAM: You never worried about the low-tops messing up your ankles?

CW: Nah, you get taped—the tape job in the NBA is better than the support of a shoe anyway.

SLAM: Do you remember kicks you wore or really wanted when you were a kid?

CW: Yeah. Adidas Conductors—$80. High-top Patrick Ewings—my aunt got them for me. They were heavy, bulky, but they’re my favorite shoes ever. The Etonics. The New Balances that James Worthy wore.

SLAM: What NBA players were wearing had a big influence on you.

CW: Oh yeah. I was a Nike and an adidas guy growing up, but Dominique wore Brooks, [so] I wore Brooks. Hakeem Olajuwon wore Etonics—I wore Etonics. I was just wearing what was hot at the time.

SLAM: How many sneakers do you own now?

CW: Yeah. It’s a barn with a lot of stuff, a lot of storage. Some memorabilia and stuff like that, but mostly shoes that I have. Other guys would have [signature shoes] and I just told them to give me 50 pairs back in the day, and I got them and just wanted to keep them.

SLAM: Have you ever worn anything that you look back on now, like, What was I thinking?

CW: The DaDas. I wore the DaDa shoe on purpose. I knew it was a gold or silver chrome, and I always liked shoes that were down low and not too flashy, and I knew that that would get a lot of attention. But being the president of the company at that time—I didn’t want to be known as the guy who wore those shoes, but I was glad the company that I was working for had that shoe. I’m glad I did it.

SLAM: It was attention that benefited you, but if you weren’t in that situation, you might not have wanted it.

SLAM: Did anyone give you shit about them in the locker room?

CW: Nah, at the time I was signing guys like [Latrell] Sprewell—I signed Spree. So nah, guys weren’t [talking trash], because I was gonna make them wear those ugly shoes.

SLAM: Do you like any of the current players’ signature shoes?

CW: Not a big fan of them. I like Kobe’s, but besides Jordans right now there’s nobody that excites me with shoes, no. I mean, Nike excites me. I know LeBron wears a high-top, but I think in order to sell a shoe, it can’t be a high-top. A lot of kids don’t have enough money to buy his shoes, and you have to be able to wear them practically. You can’t wear a high-top practically with jeans. If you look at Barkley’s cross-trainers with the strap across, if you look at some other shoes—you can wear them and play ball in them. Those are the sweetest basketball shoes. One of my favorite guys, shoe-wise, is Rasheed Wallace. Always the Air Force Ones. You gotta love it.

SLAM: Yeah, he wore those even through his final days with the Knicks.

CW: He wears them in practice now, with the Pistons.

SLAM: You don’t think the technological advances in some of the more modern sneakers can help avoid injuries?

CW: Wilt scored 100 in some Chucks [laughs]. But I agree, yeah, there’s probably some better technology. When I was in high school they had shoes with the big bulk here [points to bottom of foot], so you could try to jump higher. So yeah, I think technology helps, but for the most part you gotta be able to run and jump and have game on your own. I will say the lightness of the Nike Air shoe, how light it is, has always been an advantage.

SLAM: Did you understand at an early age how big of a cultural influence you guys could have by wearing certain sneakers?

CW: We knew right away. At Michigan, we’d go to the mall and buy black socks, then they’d sell 300,000 in a weekend. We understood when we wore Nike Huaraches that that was for style—now that shoe is bad for your ankle. You gotta get extra taped.

all photos courtesy of Getty, gallery compiled by Abe Schwadron