The season ticket brochure for the 1977-78 Philadelphia 76ers included a photograph of Julius Erving’s wristbanded right hand and forearm, the index finger extended toward the heavens.

Or, perhaps, a Championship.

The Sixers had blown a 2-0 lead in the ’77 Finals and fell in six games to Portland. The fallout from the late Darryl Dawkins’ comical Game 2 fight with Maurice Lucas and a barrage of George McGinnis bricks was another Philadelphia sporting disappointment and brought a promise from Dr. J that “We owe you one.” Thus, the photo.

That finger remained outstretched for six long years, through the improbable ’78 Eastern Conference championship round meltdown against Washington, the Magic Miracle in the ’80 Finals, the 1981 ECF choke job against Boston and the 1982 title series bowdown to L.A. By the 1982-83 season, the running joke in Philadelphia was that the Sixers’ credit line was just about exhausted. The team’s fans were tired of IOUs. It was time for the franchise to make a payment.

Only one man had the coin to pay up. 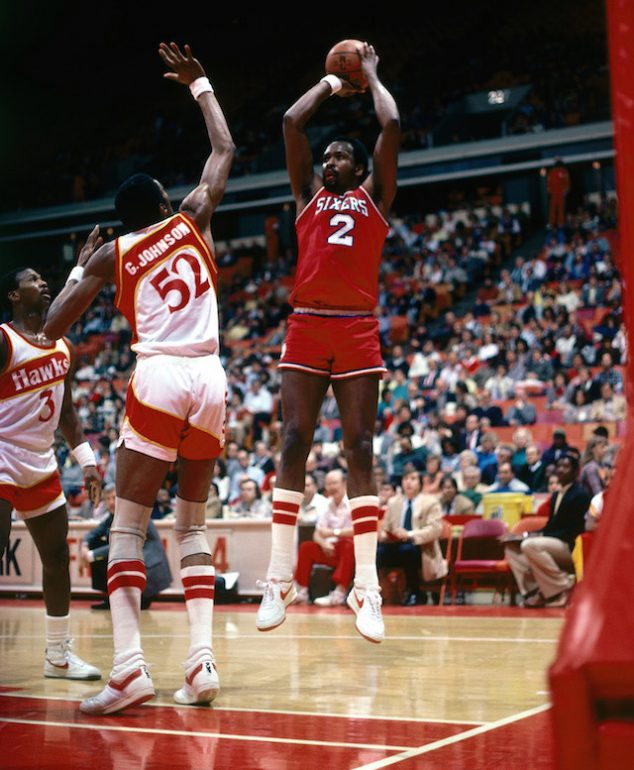 On September 15, 1982, the Sixers traded center Caldwell Jones and a first-round pick to Houston to acquire the League’s best pure rebounder, Moses Malone. No longer would the team be susceptible in the middle. Jones and Dawkins were game—and in Dawkins’ case, a lot of fun—but Malone was a relentless, 6-10 board monster who was in the midst of a seven-season run in which he would lead the League in rebounds six times. In ’81-82, he had been a Leviathan, averaging 31.1 ppg and 14.7 rpg in a League-best 42 sweat-soaked minutes a night. The Sixers signed Malone to a then-unheard-of six-year, $13.2 million deal and stuck him into the middle of a core that included Erving, Mo Cheeks, Andrew Toney and Bobby Jones. The NBA title wasn’t necessarily won that day, but the Sixers certainly established themselves as strong favorites.

Philadelphia won a League-best 65 regular-season games, then the fifth-most in NBA history. And with Malone averaging 24.5 and 15.3, Philly was no longer the entertaining—though ultimately disappointing—team it had been the previous six seasons. It had been fun to watch Doc dunk, but it was time to win it all. When he joined the Sixers, Malone had been deferential. “I know it’s Doc’s show, and I’m happy to be part of Doc’s show,” he said. “Doc’ll still be the show, but maybe now it will be a better show.”

Erving was the headliner, but Malone was the reason the Sixers had been transformed. It was sometimes comical to watch him amassing three and four offensive rebounds—off of his own misses—on the same possession, and media members had to get used to his third-person Moses-speak, but nobody in the League worked harder on the court, and that was exactly what the flashy Sixers needed. In Malone, who died in September at the far-too-young-age of 60, Philly had the perfect, hard-hat-wearing pivotman.

Lakers fans grouse that had rookie James Worthy not broken his leg in ’83, and Norm Nixon not separated his shoulder in the first game of the Finals, things would have been different. Yeah, maybe L.A. might have won a game, and the Sixers’ “Fo-Fi-Fo” Playoff would have been amended. But why argue semantics? Malone made sure 1982-83 belonged to the Sixers. His uncompromising interior play steeled a team that had lacked a sturdy spine at a time when the NBA was still pivot-centric. Acquiring Malone transformed the Sixers from an entertaining basketball show into a deadly serious hardwood force. By the time the Sixers swept away the Lakers, all the debts were settled.