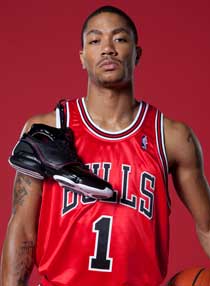 Derrick Rose is such a dynamic player, the type of guy who really has dime-turn speed and quickness in his decision-making and literal movement. After spending the summer with the 2010 US Men’s basketball team and winning gold, Rose has really turned his game up even higher, which, while expected, is still hard to believe in a sense. It’s only right that adidas broke “Jalen’s cousin” (not really) off with a pair of legit signature kicks — not just the usual pseudo-signatures that he had been receiving with the rest of the adidas team. In light of his gifts and his

abilities, the three stripes endowed the former No. 1 overall pick of the Chicago Bulls with the adidas adiZero Rose, which (as I tested) is one of the very best shoes to buy and play in.

Some initial attributes stood out to me about the adiZero Rose and in truth, there’s a lot of little things that make it so good, one being that the new shoe smell was so wonderful. Even though this has nothing to do with the performance, it’s the truest new shoe scent I’ve smelled in a long time and I loved it. I’m not one of those dudes who usually does that or licks the bottom of the shoe — that’s sort of asinine to me — but the whiff I got of the sneakers was irresistible. I loved it. The sockliner is super-high quality; I have come to the conclusion that it’s a polyurethane insole and it’s quite lovely. The step-in feel was noticeable upon seconds of my entry into the shoes.

The quasi-patent leather kept the shoe from degrading in my testing and provided a really good overall fit; I was happy about that. The tongue is really underrated here as well. Specifically with that, it wasn’t some too-thick slab of leather rubs against the front of my lower leg — no, it was a comfortable soft-cell foam that specifically backed the top part and it was quite comfortable even in lacing the shoe all the way to the top. And speaking of laces, they are very strong, and there is no uncomfortable lace pressure — just a “just right” fit all the way.

As a breakdown, the adiZero Rose has five technologies to infused with the shoe and they all have distinct purposes. The GeoFit collar on the Rose acts as like a built-in ankle frame/brace. The dense, yet plush collar is like a sort of memory foam, adding comfort and needed support above the ankle.

The Sprint Frame, which extends from the foxing (heel) throughout the majority of the underside of the foot, acts as a kind of overbuilt Torsion system, but it provides excellent balance and stability for the foot. The midfoot and arch support is something that is felt upon walking, and shifting balance on the feet can highlight its presence further. The heel was excellently built all-around because of the rigidity of the Sprint Frame and its sound construction.

Breathability is a luxury that when recognized is cherished almost immediately in basketball shoes, and the adiZero Rose has the Sprint Skin that lines the lateral and medial sides of the shoe to thank for that. The Sprint Skin acts as a semi-vented cloth that supports the foot, cuts overall weight and keeps the heat from building up inside the sneakers.

The outsole of the Rose gives much in user control and lateral stability — the Puremotion podded outsole is probably the most responsible here. I do appreciate it and helps to break up the usual traditional feel of solid outsoled shoes. The traction pattern is dubbed as a Cilia Traction Pattern, like what you know of (or have even seen microscopically) on the tongue, and it works pretty decently.

Of course, the shoe isn’t perfect and there stands to be some improvements (which is why I suspect that the adiZero Rose 1.5 is coming in midseason). While the Rose has great flexibility in the forefoot, the lack of bounce there is something that you can really feel after a while of playing. I wished that there was an adiprene+ insert right in the exposed area of the forefoot, which can be seen on the underside of the Rose. Having said that, the shoe is lightweight, so that offsets the bounce issue (and I’m guessing the amount of technology invested into the shoe prevented adidas from adding adiprene cushioning without there being an additional cost for consumers). Also, the heel is firm, which would also benefit from some adiprene treatment, but more noticeable is that I had some slip there, but not enough to cause injury. I think that if the GeoFit collar hugged the ankle a little more, it might do better, but I have small ankles, so that could be “my bad,” naturally.

Altogether, buying the adiZero Rose is a very good investment. It’s light, durable, and it plays very comfortably. Wearing the shoe informs me of why shoes that are crafted well are worth the investment, because it really allows you to compete and perform in such a way that the sneakers become almost secondary, even though they’re necessary to play. If you like the three stripes and want something that can last and bring very good comfort and quality, look out for the Rose. You won’t be sorry.

(Much thanks to Paul and adidas America for their contribution and support in this review!)

Sandy Dover is a novelist/writer, artist, and fitness enthusiast, whose work has been featured in Robert Atwan’s “America Now,” USA Today’s UWire, Yahoo!’s Associated Content, and now in Buckets magazine (as a senior writer). You can find Sandy frequently here at SLAMonline, as well as at Facebook and Twitter.