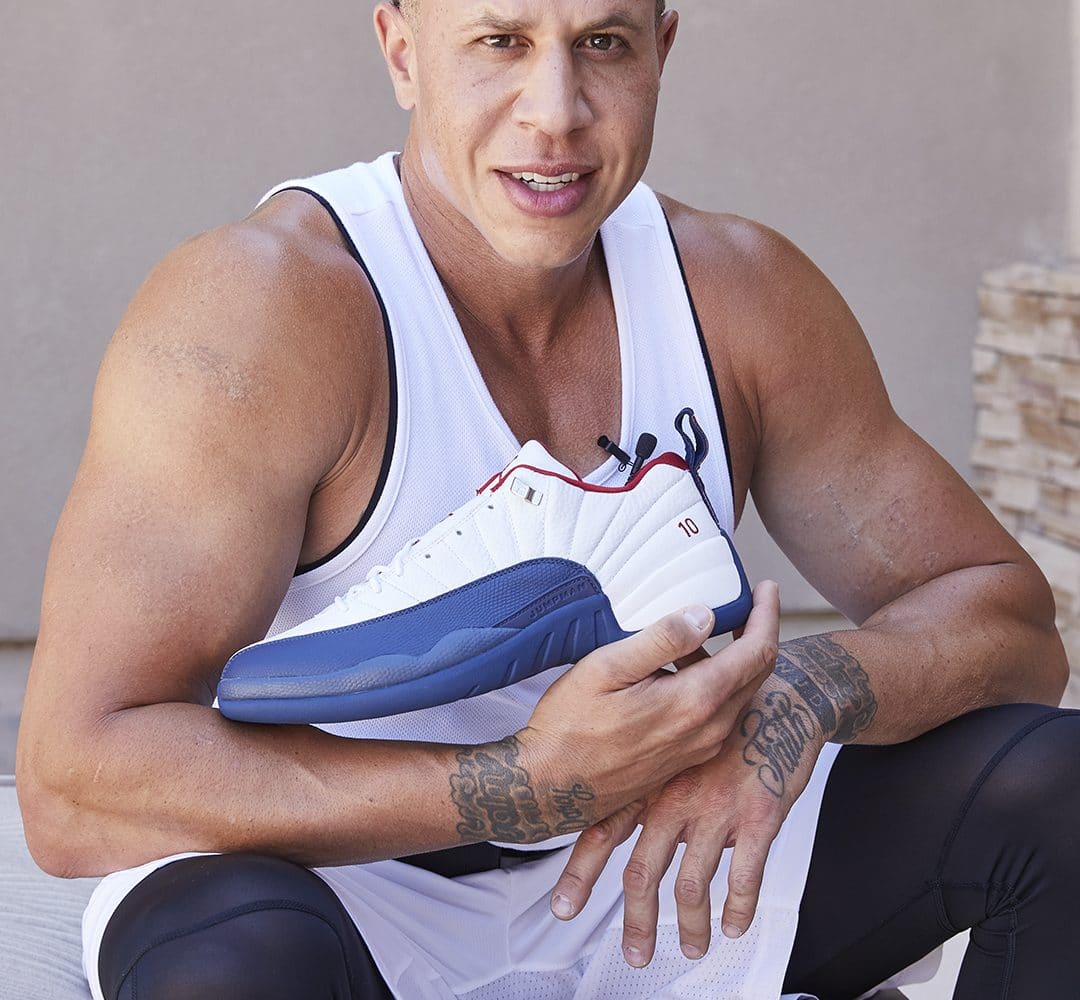 The hits keep coming. Air Jordan IIs, Air Jordan VIIIs, Air Jordan Vs, XIVs and even a pair of the Jumpman Masterpiece. Mike Bibby’s at his home in Arizona, running through a collection that doesn’t end, picking which sneakers he wants to show off for our photo shoot. He disappears into the depths of his closet and then pops up a few moments later with another black and silver Jordan box, guaranteed to have something stupid inside. He hands it off and then heads back into his collection to grab another one.

Bibby’s been part of the Jordan Brand family ever since he got drafted by the Vancouver Grizzlies with the second overall pick in the 1998 Draft. He was one of the League’s illest point guards during his 14-year career. He dashed around the court as a threat at the rim, an early adopter of the three-point shot and a composed floor general. He was the leader of the Kings during their title-contending runs in the early 2000s. He played ball without fear, always ready to step up in the clutch. He was the foundation of a team that played every game with an unstoppable intensity.

Bibby’s in-game accomplishments speak for themselves. He had averages of 15 points and 5 assists throughout his time with the Grizzlies, Kings, Hawks, Wizards, Heat and Knicks. Look a little deeper and you’ll see that all of the crazy moments in his career happened while he was wearing wild Air Jordan colorways. You’ll see that Bibby’s sneaker resume is A1.

He played in the you-can’t-get-these Js. The joints that featured his name, his number or “TD,” which you’ll read about in a moment. His kicks weren’t getting released. Nah, his kicks were player exclusives.

The Jordan Brand player exclusive has been rare air ever since the jump. They are the special editions made specifically for a Jordan-sponsored athlete, decorated in team colors and adorned with at least one personal shout out. And ever since Bibby, Ray Allen, Michael Finley, Derek Anderson, Vin Baker and Eddie Jones started showing out in PEs, sneakerheads all over have been fiending for them.

But the PE has remained guarded, with the exception of leaked photos and on-court appearances. And the creation process of the PE has been even more difficult to find out about.

That’s why Bibby, a certified sneaker legend, is searching through his library of sneakers. He’s going to tell us how a Jordan Brand player exclusive gets made and let us check out a handful of Js that haven’t been properly introduced before.

He brings out versions from his time with the Kings and with the Hawks and with Team USA, while the majority of them stay in the back. It would take forever to go through them all and we don’t have that much time. There are a couple of pairs that he picks up and stares at. He can break into a story about any of them, at any moment. Or he can go into detail about hidden rooms at the Nike campus with Js stacked to the ceiling. Or he can chop it up about the early Team Js.

So we sit down with Mike Bibby, a Jordan OG, to talk.

SLAM: How does a PE get created?

Mike Bibby: When I was playing, they would mail you, like, five, six shoes in different colorways. You’d pick two or three colors that you liked and they would get it done. They usually pick the shoe of what you’re going to wear and then they’ll send you the colorways of what you could pick from.

SLAM: How did you choose between having “Bibby” on some of them and “TD” on others?

MB: I didn’t really have a nickname so I just told them put my name and just put the TD. When they send it to you, it would either be “Bibby” on the side or “TD” on the tongue.

SLAM: And for the people that don’t know, what is TD?

SLAM: How involved were you in the design process?

MB: They would pick the shoes and the colors. You have, like, six, eight colors to choose from. Little things to switch here and there and you picked which ones you wanted and they were done.

SLAM: You were one of the first people to get Jordan Lows. How did that happen?

MB: I just always felt, like, can you make them in lows? And if you ask questions, it’s either yes or no. They said yes. I’d rather wear lowtops than hightops anyway. A lot of the Jordans were hightops or mids. I was more comfortable playing with lowtops.

SLAM: What was your first PE?

SLAM: What’s going through your head as you hold those Masterpieces in your hand?

MB: I don’t even know how I found these… I found them in my closet one day. It’s the only pair I have. I think I have two Grizzlies shoes left and I’m going to hold on to these as long as I can.

SLAM: How involved were you in making these into a reality?

MB: They sent them to me. [Laughs] When I got them in the mail, that’s when I knew I had them. They made a pair of these and they made a pair of black/gray ones. They’re Jumpmans. Back then it was mostly Jumpmans that they put us in. Towards the later part of the years they started giving us more retros. But this is probably the first shoe they made specifically with my colors.

SLAM: Which of these PEs means the most to you?

MB: These [“Olympic” Air Jordan XII Lows] are probably the ones that I don’t have that many of. The “Olympic” colors. We were only there for a couple weeks trying to qualify for the Olympics. They made these and the XVIIs for me.

SLAM: What do you remember about MJ when you were a kid and his impact off the court?

MB: I was a little bit older then but every kid wanted a pair of Jordans. The best to ever play the game. Having a pair meant the most to any kid. Coming into the League and being asked to wear it coming out, I couldn’t turn it down. There was no way he was going to be turned down because you have unlimited Jordans. And I never had them.

SLAM: So how did you link up with Jordan Brand?

MB: We had the same agent back then, David Falk, and he asked me, “Would you want to wear Jordans?” I said, “Hell yeah.” It wasn’t even a question. It was over with. They had six of us, I think, when they first started. I remember walking past Foot Locker and being on one of those pictures. I was thankful for it.

SLAM: What else do you remember about that Foot Locker moment?

SLAM: You had a lot of success really quickly. Was that your first, Yo, this is real moment?

MB: I think when I first met my agent, that was the first time. Because back then he was the biggest agent out and he had Michael Jordan and I knew stuff was about to get real when I met with him to be my agent. I didn’t meet with any other agent. I knew it was going to go uphill from there.

SLAM: With that in mind, when did you realize that MJ’s legacy was way bigger than basketball?

MB: I don’t know if I understood it when I was younger. You don’t get it until you look back on it now. But the stuff that he’s brought out and the way people go crazy for his shoes is crazy. And as a kid growing up, it’s the best sneaker out.

SLAM: What do you remember about the first time you met him?

MB: He was tough. [Laughs] I remember we were in a meeting, all the guys, Carmelo, CP, and all the other guys were at dinner. He went around the table and ripped everybody. I was just sitting there like, “Damn, what is he going to say about me?” It was fun just to be there, be in his presence, be around the best basketball player to ever play the game.

SLAM: What did he say about you?

MB: I don’t even remember. He said something about everybody. I was like, “Damn, he ain’t really say nothing bad about me.” I was the quiet one back then so I think I was okay.

MB: I mean, it was good. [Laughs] People in the locker room would come over and check them out. That was a big thing, just seeing the different colors and knowing that these won’t be in stores. It’s different from nowadays. A lot of guys are wearing shoes that come out in stores. I don’t know if it’s marketing or what but that was the biggest thing—knowing that no one else would have these shoes that I’m wearing.

SLAM: A big trend these days is putting your favorite movie or musician on your sneakers. What type of artwork would you throw on a custom colorway?

MB: I definitely would’ve thrown Scooby-Doo on there and probably Madden. We’ve been playing Madden for over 20 years. We have a draft every year. So it’d be Madden and Scooby-Doo. Scooby-Doo is my favorite. I love Scooby-Doo.

SLAM: Not only are you a Jordan Brand OG, but you and your Arizona Wildcats teammates also wore the Pennys before Penny did. How did you guys get to debut the Foamposite One back in 1997?

MB:  Eric Lautenbach came to our team. It was the first year we were there and he came and sat everybody down and said, “I got a shoe that no one has seen yet. It’s not your team color.” Back then you matched your shoe with your uniform. It’s not like nowadays where everybody wears a different color just to be different.

“It’s not going to match your uniform. It’s up to you guys if you guys want to wear it.” I said, “Hell yeah, I’m wearing them.” A few guys wore them. I think Jason Terry wore them, I think Quynn Tebbs wore them, a few guys that sat on the bench wore them.

But that was it, really. He got a shoe that’s not our color, hasn’t come out, no one has seen it yet. “It’s up to you guys if you want to wear them.” You know I wasn’t turning that down.