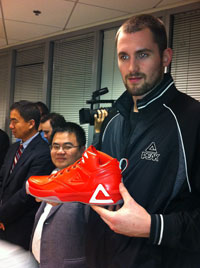 During NBA All-Star weekend, Thursday night is like the soft opening for a hip new Vegas casino or a nightclub, stars come out in full force to kick things off and last night was no different. Peak Sports USA, a long-standing and respected active wear and number one basketball footwear brand in China, dove head first into the US market with their official product launch at their L.A.-based headquarters.

In what will undoubtedly prove to be a shrewd marketing campaign, Peak will have three of its players wear special All-Star edition kicks for three of the weekend’s high profile events: Three-Point Shootout (Dorell Wright), Slam Dunk Contest (JaVale McGee) and the All-Star Game (Kevin Love).

“This All-Star is an exciting moment for Peak,” says Mr. Xu Zhihua, CEO of PEAK Sport Products Co. Ltd. “We will be the first Chinese brand in history to have our shoes featured during the All-Star week. We also want to take advantage of the moment to announce our US presence and aggressively penetrate into the US market.”

On hand to officially unveil his sneaks to the media was KLove, Mr. 30-30 himself. The sneaks, dubbed “The Relentless” based on Love’s approach to Windexing the boards, are a bright red mid top with the company’s logo in white on the side. The shoe’s tongue features Love’s jersey number and the heel displays his personal logo. The sole is a gray colored gum.

be part of the Peak team and hopefully this will grow into bigger endeavors for me and for the Peak family,” says Love. “I’m very excited to be part of the All-Star Game representing PEAK and that it’s happening here in L.A.”

Additionally, Peak made a special sneaker for McGee to rock during the Slam Dunk Contest but kept it under wraps during its launch. They did hint, however, that they incorporated McGee’s love of Marvel Comics’ character Wolverine into the shoe’s design. Look for the unveiling at the contest.

Already the third largest sponsor in the NBA, Peak

For more information about PEAK, get the www on over to peaksportsusa.com.