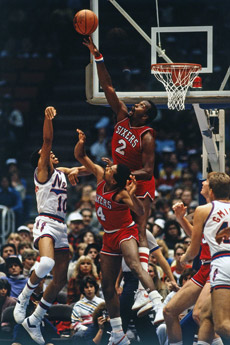 Every year, hundreds of basketball sneakers are produced, issued, sold and played in on the hardwood worldwide. And at least one star NBA player has a special season at peak of his career, and a signature shoe shares his glory. That’s what Sneak Peak is about—highlighting players and their sneakers from the past 25 years who shared the spotlight with iconic play and iconic style.

There wasn’t anything like one Mr. Moses Malone running up and down the Spectrum locker room, through the deep passageways of the Spectrum, along the sidelines during the pre-game warm-ups, yelling that immortal chant in dedication to the Philadelphia 76ers’ eventual follow-up 1983 NBA Finals appearance and championship against the Lakers of Los Angeles, after the Sixers did their best “Minority Report” impression and made like the future Buffalo Bills in losing three different Finals series from 1977 to 1982 (the Bills lost four straight Super Bowls in the late 1980s and early 1990s).

The Sixers acquired Moses, and sure enough, Moses made his mark—so did the Nike Air Force 1.

A revolutionary shoe, the Air Force 1 (or known commonly as the “AF-1”) was the first basketball shoe in the history of sneakers to introduce the Nike-patented Air-sole unit, which was and has always been housed in the heel of the shoe, encased by a thick rubber sidewall and outsole and a minimal inner foam midsole. No-frills and no-nonsense in nature, the Air Force 1 was a pioneer for what was to become the future of basketball footwear. It was a shoe made to literally form-fit to the wearer’s foot and has utilized a full-rubber outsole that has made good work of traction in the way of concentric circles and miniature star patterns to grip the hardwood, while full-grain leather topped off the shoe in the choice of the original hi-top and low-cut models (eventual mid-cut versions were released in the 1990s).

The legendary Moses Malone did his work in the Air Force 1 as the leading endorser of the shoe, while other top-notch NBAers like Philly teammate Bobby Jones, rival Lakers Mychal Thompson, Michael Cooper and Jamaal (formerly Keith) Wilkes, and Calvin Natt also ran ball in the shoe in its inaugural year in 1982. (As a part of the 25th anniversary of the shoe’s release, Nike honored all six of the original wearers, including Malone, with exclusive premium models, redubbing it the “Nike Air Force XXV”, a.k.a. the Air Force 1 ‘07.)

(S. Dot Sidenote: Those Air Forces are no joke when it comes to real activity. I know, I know, they’re supposedly an antiquated shoe, and yes, Rasheed Wallace either played in regular A-Ones or Supreme Max Air versions with Zoom Air sockliners, but seriously, the regular stock version is legit. For all the fitness freaks out there, if you lift, buy a pair of these and the comfort is surprising. The whole “it molds to

your foot” concept is actually true and if you’re like me doing heavy weight squats and deadlifts, it’s seriously underrated—just try me. I mean, you’ll wanna get some new insoles eventually, but these are a winner—I have the non-Jones Beach, gray canvas AF-1s, by the way. Dovi out.)

Certainly the AF-1 was an immediate winner on the basketball court, just as Moses was. Having been the first professional basketball player to skip college entirely for a pro career (with the Utah Stars of the American Basketball Association), a six-time ABA/NBA All-Star, a two-time NBA MVP, a four-time All-NBA team member, a three-time league leader in both total rebounds and rebound average, a two-time leader in total minutes and minutes played, and a three-time leader in free throw attempts all before the ’82-83 season, Moses was clearly at the peak of his game and worthy of his own signature shoe.

As the prime addition to a Sixer outfit which was led in part by the mythic Dr. J (nee Julius Erving), Malone was the coagulant that allows a scrappy, talented but slippery Philly team get some grip to win big. Almost needless to say, Moses made like the former Hebrew leader and made the Western Conference forces of yesterday let his people go, and he got off with a Finals MVP award to match his ’82-83 regular season award, an All-NBA Defensive First Team spot, as well as an All-NBA First Team selection to boot. 24.5 ppg and a league-leading 15.3 boards pulled kept Moses on top of the world in the ’82, while 26 points and nearly 16 rebounds in the Playoffs did just the trick against those gold-and-violet Angelenos.

Soon enough, Moses stayed another 12 seasons in the League (maxing out at 21 total pro seasons!), slowly and steadily garnering more honors, putting up more points and “hustling down” (as in bricking easy shots for more stats) a yacht’s load of rebounds, from Washington to Atlanta to Milwaukee, back to the City of Brotherly Love and finally to San Antonio, as he sat the bench to see another MVP in David Robinson take the stage, up close and personal. It was inevitable that the Pro Basketball Hall of Fame called for his induction in 2001 and the bball son of G

od has been coming correct ever since, working with the NBA’s Retired Players entity.

The Air Force 1 has since been become a icon in the truest sense, as that famous silhouette has been copied and pasted on a myriad of different shoe models from labels like A Bathing Ape to Pro-Keds; brought back in style in the late-90s by one Sean “Puffy” Combs/Puff Daddy/P. Diddy/Diddy/Shiny Suit Man in mid-tops and jewel Swooshes; been adopted by the sneaker customization community; immortalized in a Chris Rock colorway (I.e. “If it’s all white, it’s alright!”); and has been honored and designed by more celebrities and athletes than you can imagine. It technically even has its own Nike Sportswear store! (21 Mercer Street, NYC) In short words, Moses and the Air Force 1 kept each other realer than your favorite “Chappelle’s Show” clip. Like the real Moses, its descendants are comparably deep in the Swoosh’s family tree.

No one rides better than the President in the air…Nike’s ride gave Moses the opportunity to go hard on that Spectrum floor.