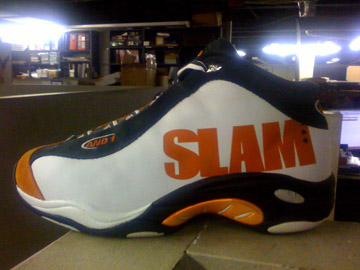 The thing that’s always struck me about the Tai Chi is its far-reaching appeal. It was more than trash-talking streetball players that wore the shoe. Its simple, lightweight design (I was a big fan of the terrycloth interior) and affordability made it a rare mid-priced shoe that was immensely popular. The fact that Vince Carter wore it at the 2000 dunk contest and throughout the ’99-00 season probably didn’t hurt either. While the shoe holds its own moment with me, I’d go as far as to call the Tai Chi And1’s greatest contribution to basketball culture in all of their years in the footwear industry.

The timing couldn’t be any better—the shoe turns 10 this coming season—for And1 to orchestrate the Tai Chi’s return.

I recently got the chance to talk about the shoe and what the company has planned for it with And 1’s GM for product development, Rob Purvy.

SLAM: Where does the Tai Chi stand in terms of everything And 1 has done as a sneaker company?
Rob Purvy: I think it’s an iconic shoe. It kind of sets a tone and it’s one of the things that helped the footwear aspect of this brand explode.

SLAM: What do you think it is about the shoe that made it so popular?
RP: I think it was just the convergence of all of the ingredients that make a successful basketball shoe. It was a really competitively-priced shoe when it debuted initially, $75.

And just the visuals, it’s classic, it’s very stark. At that time, the incredible flat-screen TV’s that we have now weren’t out then, so it wasn’t easy to identify what was on (players’ feet) but from any distance, you were able to identify that shoe. And above and beyond everything else, it was an excellently-made, comfortable shoe.

SLAM: What do you think Vince Carter did for the shoe, wearing it that season and in the 2000 dunk contest?
RP: I think that it was invaluable. You can’t put any words on it because I think we’d all probably agree that that particular dunk contest is one of the most memorable ones ever.

Without stepping on the other brand’s toes, Vince coming out with that shoe on, based of what was going on in the industry at that time was like, wow! He’s rocking that shoe!

It’s immeasurable… [On a corporate level] everyone works hard every day to develop whatever with your sales, marketing and advertising team, but I think we know that there’s certain things that happen that stick out in your mind that no marketing company could ever conceive of. Just the energy and the improvisational acts of that particular moment…

SLAM: What was the situation with you guys and Vince then? Did you actually have him signed?
RP: No, he wasn’t signed. At that time he was in a transitional period. I believe he came into the league as a Puma athlete and he transitioned into being a Nike athlete.

SLAM: In a way, to me anyway, it’s almost cooler that he wasn’t signed, you know? He could have worn anything, but he chose to wear the Tai Chi.
RP: Exactly. Then you know, if you look around the league in other basketball situations, it’s almost like the shoe has been there, around great moments and history that has happened. So many guys were happy to wear this shoe. Even now that word is spreading about the release of this shoe, there’s a lot of people who were around in that era who are saying, ‘Wow, If you’re bringing it back I’d love to wear it again.’

SLAM: Were you guys surprised by how popular the shoe was with players across the league? I remember seeing guys on so many teams with the Tai Chi on their feet back then.
RP: I think the other thing that happened with that shoe and that’s why I keep using the word convergence, it really allowed NBA players to really feel as though they were speaking to why they fell in love with the game.

I think you know [as a price] $75 at that time and even still to this day, it’s not a triple-digit price, but it’s definitely not a little money, but it’s not a lot of money. It’s almost as if they’re speaking to the rank and file mentality of a true basketball player who’s playing the game for the love of the sport.

SLAM: You’re re-releasing the shoe soon. What do you have planned exactly?
RP: Our official launch will be Nov. 12 and there will be four colorways available. The other thing we find exciting is what we’ve called the Tai Chi trilogy. The second part of this, which is unveiled at All-Star weekend, will be our special, limited-edition 212-pair, really high-end, crazy version of (the Tai Chi). The reason we’re doing 212 pairs is that there are actually 212 tai chi moves. Each pair will have a hangtag that will have a silhouette of that particular one of the 212.

(Note: Between the time I spoke with RP and when I wrote this up, And1 shifted the plan on the Tai Chi trilogy. Instead of the TGR, the company will re-release the low-cut version of the Tai Chi. In keeping with the Chinese philosophy ties to the shoe, it’ll drop on Feb. 14, in line with the launch of the next lunar new year. — O’Leary)

SLAM: Will you release all four colorways at once in November?
RP: Three of the four colors will actually be available on Nov. 12. One of the other things that I think mkes the Tai Chi so exciting is that it was such a great opportunity to do so many different colors. In the NBA, you’ll see some assorted colors initially above and beyond what will be available in retail because our guys (endorsement athletes) will wear team versions of the Tai Chi  based off of the teams they play for.