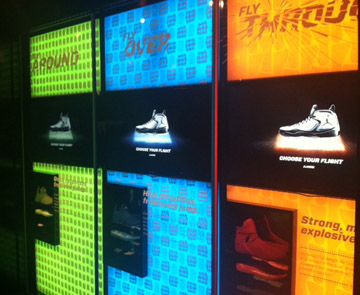 The Air Jordan 2012 Flight Lab descended upon All Star Weekend this past Thursday, and it’s been a massive hit ever since touching down.

Team Jordan Athletes Chris Paul, Dwayne Wade and Carmelo Anthony have been making regular stops to both interact with fans, and participate in Q+A’s hosted by DJ Kahled and Jadakiss, every day since opening on Thursday. Each session’s left fans buzzing with excitement, and the crowds just keep getting bigger as a result.

I came through late Saturday afternoon to tour the Flight Lab myself and didn’t know what to expect. When I walked out, after being accompanied by a Brand Jordan team member, I did so thoroughly impressed by the elevated experience offered to anyone interested in exploring Air Jordan’s 2012 interchangeable technology.

I wasn’t the only one impressed by the Flight Lab experience on Saturday either. Nearly three hours after his Q+A ended for the day, I found Jadakiss himself still hooping on the outdoor court included in the Flight Lab Experience for anyone interested in testing out their own customized pair of newly designed Jordan’s.

Jadakiss was going hard out there too, but he was cool enough to take a timeout and talk with SLAMonline for a few minutes about everything involved in the Flight Lab experience this week.

“It’s been quite lavish and amazing,” Jadakiss said. “If you aren’t here to experience it, it’s something you’ll definitely miss. The Jordan Brand brought me out here for All Star Weekend, and I’ve been staying at the Flight Lab for three hours after the events is all over each day. That’s how much fun I’m having.

Of course I got my kids here with me, and it’s fun for them too, but I’m having just as much fun as them.”

As far the guided tour through the Flight Lab, Jada called it a priceless experience for anybody. Even him.

“The flight lab is amazing, the sneakers, the stuff you can do in there, check out the videos, then come out here and shoot some hoops, you can’t go wrong. It’s priceless baby.

Brand Jordan, Jordan Brand, it’s a beautiful thing. I’m a family member and affiliate for life. I love it.”

On that tour, fans—who can pick up a copy of SLAM’s Special Jordan Brand Issue—are first introduced to the concepts behind the Jordan 2012 shoes through a series of training videos featuring CP3, D-Wade, and Carmelo. Then, consumers are prompted to decide whether their game is best described as Fly Around, Fly Over, or Fly Through; like Paul’s, Wade’s, or Anthony’s respectively.

After learning more about the shoe’s components, in a room surrounded by walls made from a hardwood basketball court, you’re then taken into a third room where you work hand-in-hand with Brand Jordan to build your own personal shoe.

As far as how his 2012 Jordans were affecting his game, Jadakiss said he definitely noticed an improvement.

“They feeling good, you know what I mean,” he told me. “I’m shooting better today. I think these shoes got me feeling some kind of way, I don’t know what it is. There’s also not too much wind today, so I’m able to let ‘em fly a little more frequently than yesterday.”

As far as how Jadakiss would describe his game, he said he was a combo of all three concepts actually.

If you’re around the Orlando area on Sunday, I highly recommend you go through the Flight Lab too. It’s an experience you don’t want to miss, especially if Jada is still out there letting ‘em fly like he was on Saturday.