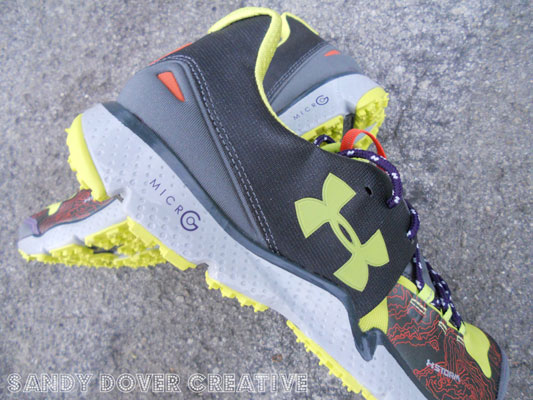 Here’s what I said about the first version of the Under Armour Charge RC, which was the company’s first true mastery of its running footwear division:

Simply put, the Under Armour Charge RC is a top-level running shoe, and one worthy of the attention of today’s basketball player looking for a conditioning edge. Designed with the mechanics of wild animals and certain kinds of insects in mind, the Charge RC first distinguished itself with me with its unique fit. There’s no true tongue, as it what is acting as a pseudo-tongue is really just an extended piece of the forefoot. The lacing is attached to not only the pseudo-tongue/forefoot upper directly, but it incorporated into the quarter paneling of the Charge RC, enhancing the security of the entire shoe. The fit of the shoe is further distinguished by the 14-piece outsole, comprised of the six-part carbon rubber heel pods and the eight-part blown rubber forefoot pods, making the ride of the Charge RC incredibly unique underfoot and hard to compare with other sorts of running footwear, in a very good way. … It’s structurally very strong, largely because of the synthetic upper and high-tech sole materials, which are very dense, but simultaneously light in weight (I’m thinking of the 4D Foam strobel board that’s vented and visible in the bottom of the shoe, and the carbon composite spring plate that helps distribute forces placed upon the shoe and the foot housed within it for the entire length of the shoe). The toe spread of the Charge RC is good in foot stride and strike, and one thing that I adore in a cushioning set-up is a springy/snappy foam or like system; the Charge RC’s cushioning is very much springy (much to my delight), which encouraged my own midfoot/forefoot propulsion and foot strike—essentially, I was able to run the correct way without being deterred by the shoe’s build (as many shoes produced today are overbuilt).

Since that time, Under Armour has developed an amended version of the Charge RC, with the attached name of the Storm, which is a nod to its all-conditions build. Made to be an all-terrain running shoe for the road, the trail, and everything in between, I came away with the trusted impression that the Charge RC Storm is perhaps the best running shoe in the industry. For reasons that are both related and unrelated to the previous shoe, I can’t help but sing the praises of the Storm.

Quite literally, the Storm is arguably the best overall running shoe I’ve evaluated in my years of product testing, but it is also outright the best trail shoe I’ve ever evaluated, and there are specific reasons for my calling it the best of all trail footwear that I’ve personally experienced—one reason is that the Storm uses a mountain bike-like tread on its 14-piece outsole, which allows for the shoe to grip the ground no matter if it’s wet or dry or muddy or slick or unstable; the other distinguished attribute of the Storm is that it’s treated with Under Armour’s UA Storm technology, which is basically a water-resistant treatment that resist moisture absorption in the upper, and that kept feet dry during runs and training.

Everything else that is strong about the shoe can be found in its prior model, as well. The independent movement of the heel and forefoot of the Storm gave way to efficient running in my movement; my feet were engaged just as they were needed, when they were needed, and that same efficiency from the rear- and forefoot being engaged promoted a better overall gait in my running. It’s somewhat minimal in construction (which is a good thing), but still protective (it has the right materials in the right places). The comfort of the Storm is very good comfort, because of the 4D Foam sockliner stacked directly on top of the Micro G foam, both of which provided me with excellent foot protection. The Storm’s high-level traction and foot security only magnified its excellence, and I was locked into the Storm with confidence. Its other endearing quality is that the Storm is very strong and durable, but still soft, a delicate balance to achieve in any performance shoe.

Quite simply, if you are looking to train seriously for basketball (or for any sport, including running itself) and you want to make the most of your runs, the Under Armour Charge RC Storm is likely a justified purchase. Its versatility, strength and comfort make it the best all-around running shoe that you can find, without having to be juggle between multiple pairs of footwear to make the most of your terrain. The Storm is essentially a ‘go-to’ performance shoe of choice, as it is for me.

Sandy Dover is a published author, media consultant, and web & print magazine columnist in the world of publishing, while serving as an expert sports product evaluator and as an independent wellness & training consultant, advocate and journalist in the health & fitness industry (with the two worlds often colliding). You can find Sandy frequently here at SLAMonline, as well as at about.me, Facebook and Twitter.