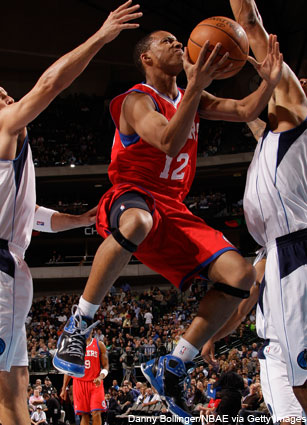 Weaving through cars on the Hollywood freeway, the topic of conversation is Allen Iverson.

Since being drafted by the Sixers in June, Evan Turner has heard his share of stories about The Answer. On our drive back to West Hollywood from his Li-Ning commercial shoot, Turner gives us some of the best. He’s animated as he recites stories from the back seat, all ending with an incredible punch line. Practice, money, relationships with coaches—the young man has some gems.

Brian Cupps, Li-Ning’s Director of Brand Initiative for Basketball, smiles as he steers the Lincoln Navigator through L.A.’s hectic traffic lanes. He teases Evan a bit. “Give it a year and we’ll see how you change on us, Evan,” he jokes.

Evan laughs it off. “You know I’m never going to change.”

Since joining the Li-Ning team a little over a year ago, Cupps and his family have lived in China. The experience has given him a ground level POV to witness the passion for the game of basketball in China. He believes that the game is more of a social vehicle in China, a result of the nation’s one-child policy. “The NBA has done an amazing job of branding themselves there and continuing to invest resources and time and energy to show more games,” he says. “I’ll walk into the office at 9:30 in the morning and there will be games on during the season. The speed of the Internet and the digital media age is important. All those kids are online, they’re blogging about it, they’re reading about their favorite players. They genuinely love the sport and social aspect of it. They’re as educated as the fans here and more in some instances. I think that is exciting and shows the upside of basketball from a global perspective. You bring a guy like Evan to China and see how many people know about him already, know his teammates. He hasn’t even really started to build himself or his brand over there yet.”

Following several decades of success in China, Li-Ning is hoping to build its brand in the US. In the past couple of years, they have inked several NBA players, including Baron Davis, Hasheem Thabeet and Shaquille O’Neal. The brand opened a flagship store in Portland, OR early this year and followed that up with the signing of Turner, college basketball’s top player last season and one of the most coveted prospects in the 2010 NBA Draft.

Turner and his agent David Falk connected with Cupps early on, helping smooth some of their concerns about partnering with a foreign company. For Turner, a trip to China helped reassure his decision to sign with Li-Ning. “I checked out the Li-Ning campus and met the owners,” Turner says. “I liked it all. I think it helped make me feel that everyone is going to work hard to make this thing work. It was super cool and everyone was really nice. Some cities feel like America and some spots seemed foreign to me. It’s definitely a blessing when you think about it. You grow up playing basketball and then end up in China doing a shoe deal.”

While he will clearly be marketed in China, Li-Ning is also hoping that Turner can help the brand break into the $2.4 billion US basketball footwear market. Much of that will depend on Evan’s NBA success and the brand’s marketing ability. Turner’s signature Li-Ning shoe will be available next season and the brand plans on using him in print and television advertising. Li-Ning recently dropped a hilarious viral video targeting US consumers starring Donnell Rawlings of Chappelle’s Show.

So far this season, Turner has started 12 games and is averaging 8 points and 5 rebounds per. He has struggled in his past three contests, scoring 5 total points while averaging 20 minutes per game in that span. The Sixers are currently 5-13, good enough for last place in the Atlantic. Prior to the start of the season, Falk insisted that Turner would be on a major learning curve through the All-Star break. “I want him to take the first two and a half months to really work quietly behind the scenes to integrate himself,” Falk says. “It’s not his team—he’s a rookie. Evan’s got to pick his spots. He has to be respectful of his teammates. Even though he was player of the year, he’s going to have to earn it the old fashioned way.”

Turner is extremely humble and committed to getting better. He chose to live a few minutes from the Sixers facility so he can spend the majority of his time there. When we visited in October, he was a few months removed from the flashing lights surrounding his brilliant college career and the NBA Draft. He told me that it wasn’t too long ago that he was in high school, hoping the cafeteria ladies at St. Joe’s would let him have some milk despite the fact that he had no money, having spent it on his daily commute to school.

Cupps believes in Turner and has a clear vision for Li-Ning basketball. “We want to be pursued,” he explains. “We want our products to speak to the level of performance and premium that the brand can be and wants to be. I think that will be the greatest testament to when we’ve made strong inroads. There are players hopefully similar to Evan and Baron and guys like that who truthfully sought out the brand because they recognize what we stand for and the products that we make for players that can enhance their performance. I don’t think we’re there yet today but that’s ultimately where we can get to. Seeing young talented ball players saying, ‘Hey, I’m going to strike a different path. I’m down with this company Li-Ning and their products.’ Making that distinction on their own, up front. That would be a great step forward.”

Be sure to check out the feature on Evan Turner and Li-Ning in SLAM 144. For more information on Li-Ning, visit li-ningusa.com