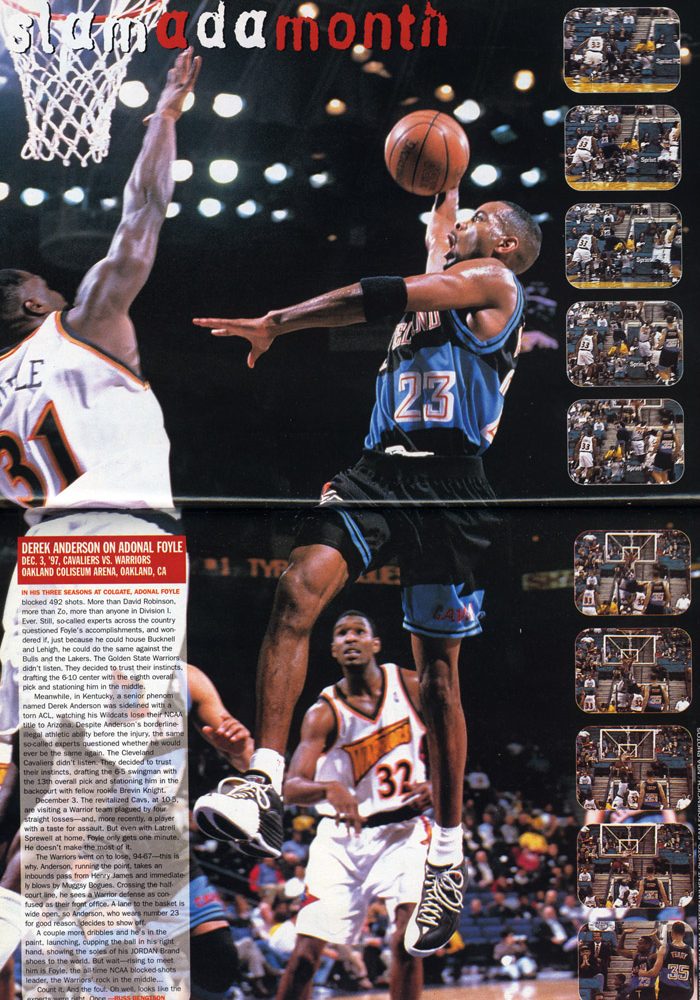 Yesterday I reviewed The Untouchables, a documentary green-lit by Derek Anderson, a star on the ’96 championship Kentucky squad.

While the focus of the docu is Anderson’s alma mater, when we spoke, our conversation veered off that topic. With 11 NBA seasons on his resume, Anderson, who’s known to be soft-spoken, began opening up on his stay in the League. Surprisingly, he didn’t especially enjoy his time in the pros. Even more surprising was Anderson’s willingness to talk honestly about his issues with the NBA.

Without further adieu, here’s Derek Anderson’s take on why he preferred college to the NBA, why certain players “make it” in the L and others don’t and why he won’t watch NBA games on TV.

SLAM: I mean, I don’t even really have to ask after watching the documentary, but what did you enjoy more, the college experience or the NBA experience?
DA: College. By far.

SLAM: What about it?
DA: Everything. (Laughs)

SLAM: I guess you could say transferring from Ohio State to Kentucky was the best move you ever made?
DA: Oh my goodness. And that was two of the best years I had, too. All four of my years in college was like the best time in my life. I played 11 years in the NBA and nothing compared to college.

SLAM: Did you stay in touch with Coach Pitino when you were in the NBA?
DA: Yeah, yeah, all the time. You know, because he went to the NBA as well. And then in the summer, he came back and he was coaching at Louisville, I came up there and worked with the players to help him out and had relationships with some of those guys.  Coach Pitino was always the one that looked out for his players, so we always stayed in touch with him.

SLAM: UNC is famous for the alumni games.  But UK has some solid alumni, too. Y’all ever go back to Kentucky and run in the summer?
DA: Yeah, I arranged a 1996 against the 1998 championship game. I did it at Rupp. My foundation did it at Rupp. It was a tie score 130-130. I hit a last second shot to tie the game. It was all in fun; I think there was like 14,000 people that came to that. It was crazy.

SLAM: Were you surprised by who did well and who didn’t do well in the League from your Kentucky team?
DA: Nah, once I got to the League I learned that it was politics.  If I got to shoot 25 times a game, I’m gonna be an All-Star. You don’t get that opportunity to do that.

SLAM: If you didn’t hurt your leg, you think you would’ve done a lot more?
DA: We went to the championship game three years in a row in college, so that would have immediately made me go to a team that needed me more than I went to the 13th pick where we had Shawn Kemp, Wesley Person, Bob Sura—I had people that had already been established. If I would’ve went to a lesser team, I would have got to do 20, 25 shots a game. I could have averaged 20, and that could’ve been my M.O. the rest of my career. But that’s just the way it goes. So, it definitely could have changed my career if I wouldn’t have gotten hurt.

SLAM: What was your favorite stop in the NBA?
DA: San Antonio was one of the better teams, for me.  It was just all around: the guys were fun; the city was nice; everything was just calm; we just concentrated on basketball and that was good. The best moment I ever had was retiring. (Laughs)

SLAM: Why is that?
DA: Because I didn’t have to deal with the politics anymore.

SLAM: How bad is it? Is it that much of a pain in the behind?
DA: It really is…Look at the officials and all that other stuff.  Look at what they’re talking about, how they handed pro games, this and that, it’s obvious.

SLAM: As a player you felt that?
DA: Yeah, you felt it. You saw it all the time. But sometime you were a part of it. When you were on a good team and playing a bad team, they’re giving all the bad calls to the bad team.

SLAM: Do you have one experience in mind?
DA: I’m not gonna even to say it; I’ve said enough.  Trust me, there’s a bunch of it, and everyone knows it.  To me, basketball was a means for me to do other things.  I still loved it when I played, I gave my heart, put everything into it. But once it was over, I was like, Whew. money was good, but the politics…it’s like anything else. You just get tired of it. If it’s not genuine where you can’t do what you like to do…When you get to do what you want to do, that’s a blessing.

SLAM: So why did you hang on for so long? Just the paychecks?
DA: Nah, people actually asked me to play. Because I was sitting in the house and Michael Jordan and Charlotte called me to come to Charlotte for the last two years. Because I [thought I]was done after I won a championship. I was like, I’m good. I sat at home and they called me in November. I [thought I] was done.

SLAM: What was it like being with that young team in Charlotte?
DA: It was good because I got to help them the first year. But then we got a terrible coach in Sam Vincent—a complete idiot. He was rude, disrespected people.

SLAM: He was a rookie coach, though…
DA: That don’t make no difference. You should still know how to talk to people, especially when you haven’t been proven.

SLAM: Have you put any thought into coaching? I mean, a lot of the guys from Kentucky—Walter McCarty, etc.—have gotten into coaching,
DA: A lot of people wanted me to coach in the NBA already. I was supposed to stay on with teams and coach, but that’s just not what I want to do right now. I have my passion for something else. I want to get away and then maybe go back to it. Because I think I could coach both college and professionals because it’s basically about your common sense and how you prepare yourself. And it’s about how you get teammates to play together.

SLAM: So you’re happy to be done with the NBA. Do you watch the pro game at all?
DA: No, not at all. I miss watching good teams, like college, I love watching good teams playing college. Because you watching the NBA, you know they’re gonna give fake calls, but watching some of the good players is good. Lebron and all them guys. It’s good to watch some of those players play, because they’re spectacular. But then you see certain things, stuff that goes on, and you’re like, Well I know what’s gonna happen now, so I’ll be ready to turn it off.

BONUS: SLAMADAMONTH FROM SLAM 25: DEREK ANDERSON ON ADONAL FOYLE (Just to remind you kids who Anderson is):