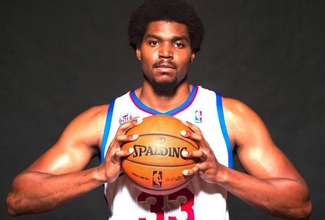 All along, the Cleveland Cavaliers were ready to take a calculated risk with free agent center Andrew Bynum. The 25 year-old is now prepared to join the Cavs, having agreed to a two-year deal.

Following a catastrophic season in Philadelphia after being traded from the Los Angeles Lakers for Dwight Howard — Bynum didn’t play in a single game for the Sixers who acquired him in a four-team blockbuster — the big fella hopes to give his basketball career a badly-needed boost in Cleveland.

The Cavs are only guaranteeing $6 million and one season to their new center, but if he meets certain performance incentives, the contract could reach just over $24 million and two years (Cleveland holds an option for the 2014-’15 campaign worth $12.5 million.)

A little more than a week ago, Andrew Bynum answered the phone without knowing the call would alter his future. But after the 7-foot center with suspect knees talked to Cavaliers coach Mike Brown — the same coach who guided Bynum to his best season in the NBA — he was ready to not only listen to any free-agent offers from Cleveland, but also place the Cavaliers among the leading contenders for his services. […] “Whatever Mike said, Andrew got off the phone and was actually excited to take the meeting,” said David Lee, Bynum’s agent, Wednesday evening. “I kid Mike that he should go into motivational speaking, but Andrew was extremely motivated and extremely excited.”

Questions still remain about Bynum’s knees — “It’s not a slam dunk,” one league executive said — and even moreso about his heart, according to a league source. Bynum missed his only season in Philadelphia because of what first was a bone bruise, and later was a knee injury suffered while bowling. Since undergoing surgery on his knees in March, Bynum has gained about 15 pounds, Lee said. Lee said he expects Bynum to be ready to play by the start of training camp — even though he wouldn’t permit his client to work out for teams. “Actually, there was no reason to have him work out,” Lee said. “His skill level’s not in question, so there’s no reason to work out. The reality is he has not picked up the ball in some time and he has to get his weight down. He’s got to lose probably about 15 pounds, which is not a big deal. But to get on the floor you’ve got to reduce your weight, otherwise you risk injury.”

The Cleveland Cavaliers are gambling on Andrew Bynum’s knees staying healthy and him playing well enough to entice LeBron James when he becomes a free agent next summer.

Star point guard Kyrie Irving seems excited about the prospect of playing with Bynum, and despite their rocky past, Mike Brown is getting another shot to coach a player who posted career-best numbers (18.7 points and 11.8 rebounds in 2011-’12) under his tutelage.