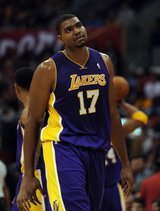 Whenever Andrew Bynum even so much as reaches down to rub his knees, a small amount of panic is felt across Laker Nation. It doesn’t sound like there’s too much to worry about with the procedure Bynum is schedule to undergo, however.

The big man will undergo a previously scheduled injection in his right knee today in Florida, and the Lakers say it’s part of normal and continuing treatment to maintain the knee’s health:

The injection is intended to serve as a lubricant for the knee, providing Bynum with extended relief on an area he said he will protect with a bulky brace for the duration of his career. After Thursday night’s Lakers loss at Oklahoma City, Bynum boarded a plane along with Kobe Bryant bound for Orlando to take part in his first All-Star game, to which he was elected by fans as a starter. Bynum is scheduled to fulfill his media and charity commitments on Friday, and subsequently go to meet Altchek for the injection.

Bynum will not participate in Saturday’s Western Conference practice run by Thunder coach Scott Brooks, but he is expected to be fine to play in Sunday’s All Star game.

Andrew Bynum did experience some knee pain late in the Lakers/Thunder game last night, but he reportedly did not seek any postgame treatement.

Bynum’s comments to the press following the contest were brief, but illuminating:“We played like sh*t and we got beat.”