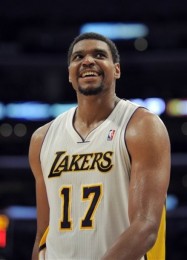 Andrew Bynum and his representative have been too busy fishing to worry about the incessant trade rumor mill — the Lakers’ center and his agent just returned from Alaska, and neither one quite understands what all of the noise is about.

Bynum’s rep, David Lee, warns that any team that’s thinking of enticing the Lakers into a trade — such as the Cleveland Cavaliers — should first discuss the idea with Andrew.

The agent for Los Angeles Lakers All-Star center Andrew Bynum said he has held no discussions with the Cavaliers and doesn’t believe a deal involving his client and Cleveland is imminent. “I’ve had zero conversations with [Cavs General Manager] Chris Grant,” said David Lee, Bynum’s agent. “I would imagine any team involved in this trade would be smart enough to talk to us.” Bynum is under contract to the Lakers, and it is common in trades of this magnitude for agents to be consulted before a deal is completed. Particularly in the case of Bynum, who can be a free agent at the end of the season.

Asked whether Bynum would be interested in signing a long-term deal with the Cavaliers, who have the cap space to take him, Lee declined comment. “We are not in position to discuss that at this time,” he said. The Cavs couldn’t feasibly trade for Bynum without his agreeing to an extension.

This is never going to end is it?

The Cavs are said to want some kind of assurance that Andrew Bynum would be willing to ink a contract extension, before they help facilitate any sort of Dwight Howard trade. A conversation about such a thing with Bynum and his people, would evidently be a good place to start.