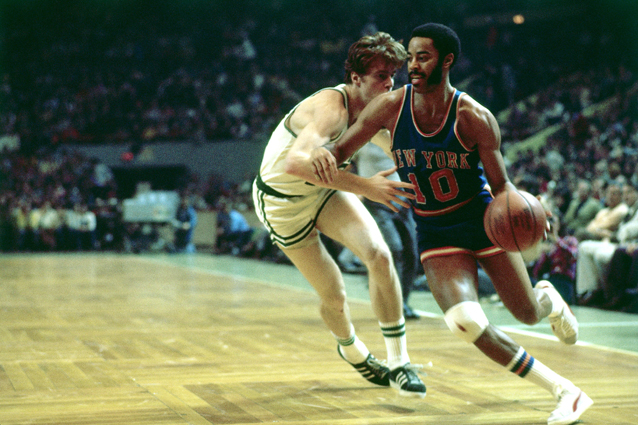 Fans of all ages and geographical origins know what happened in Game 7 of the 1970 NBA Finals: An injured Willis Reed, much to the delight of the home crowd, emerged from the New York Knicks’ locker room and scored the first basket of the game, providing the spark that would help the Knicks win their first NBA title. Not everyone knows, though, how Reed and the franchise found themselves in that position in the first place, and how they’d find themselves back in the Finals a few years later. Harvey Araton’s beautifully titled, wonderfully written When the Garden was Eden: Clyde, The Captain, Dollar Bill, and the Glory Days of the New York Knicks rectifies that.

Based off the author’s time-tinged adolescent recollections, careful research of the facts and extensive interviews with the characters, coaches and players, When the Garden Was Eden is so vivid that, at times, the games and players jump off the page right back onto the old Madison Square Garden court.

When the Garden was Eden is a book about the assembly, success and failures of the Red Holzman-coached early ’70s Knicks. But with the then-ongoing Vietnam War and general social unrest serving as the backdrop, it’s actually about so much more than that. It’s about Reed overcoming Old Southern prejudice to become The Captain. It’s about Bill Bradley’s journey from Rhodes scholar to linchpin of a racially diverse team. It’s about Walt Frazier’s transformation from Walt to Clyde. It’s about a group of out-of-town players adjusting to New York City together. It’s about the fans who filled up the old, smoky MSG and rooted the team on. And it’s about the unifying power of basketball.

Over the course of When the Garden was Eden, Araton, an award-winning New York Times writer who grew up in NY, lovingly explains that the Glory Day Knicks weren’t just Willis Reed and the Game 7 miracle; they were the perfect team, in the perfect place, at the perfect time.

We caught up with Araton to discuss everything about When the Garden was Eden: Clyde, The Captain, Dollar Bill, and the Glory Days of the New York Knicks, which is due out October 18th.

SLAM: It’s fairly obvious just from reading, but why did you choose to write about this topic?

Harvey Araton: I’ve written several books about basketball, and the others would all have been considered “critical” books for one reason or another. But this is a sport I also really love—I did play some basketball growing up—and I felt that if there were something I could write to celebrate the game I would like to do that before I was finished with my sports writing career.

It occurred to me one day that the old Knicks really were the team that I grew up with and cherished and was in awe with in many respects, so why not do a book that I could explore not only as a fan but also as a journalist? In other words: I related to that team exclusively as a fan growing up and I felt like I would really like to explore that team and its history as a journalist. There have been a number of books written about the old Knicks back in the ’70s, but I felt 40 years later it would be worthy to tackle them again to be able to put them in a sort of social and historical context that you couldn’t do in the time they were actually playing.

SLAM: You wove in a first person aspect, and yet the book is still far from hero worship. Was that a difficult balance to maintain?

HA: These guys wrote a lot of autobiographies—Bradley wrote his great book, Life on the Run; Phil Jackson has referred to the old Knicks a lot in his books that he wrote after becoming a legendary coach—so I said, if I’m going to do this, I’m going to need the freedom to write it a little differently. I mean, I feel that as someone who grew up as a fan of this team and went to the games, sat in the blue seats and smelled the marijuana, as someone who experienced that, I wanted to be able to bring that. I didn’t want this to be a straight rehash of what many of the people who will read this book already know.

My feeling was: if I could bring something more personal to the story, not only because I grew up with the team, but because at the snap of a fingers I went from being up in the blue seats to being on the road with the team coached by Willis [Reed] and by Red [Holzman], which was kind of like a dream come true in many ways. There were times in my sporting days where I had to fight off those urges to really look at these guys like they were heroes as opposed to subjects that I was supposed to be writing about.

SLAM: I really enjoyed reading about the apprehension you felt when it came to approaching Willis Reed because you thought he might harbor certain feelings about a story you wrote a long time ago.

HA: Yeah, it’s funny. There’s a very talented sports columnist, Ian O’Connor, who currently works for ESPN. He worked at the Daily News and at the Bergen Record for a few years and he would always tease me through the years when Willis was coach of and then, later, was GM of the Knicks. He said, “you know, you write all these puff pieces about Willis”—I had told him the story about how my story kind of hastened Willis’ departure—”you’re really making it up to him aren’t you?” And I laughed and said, “well, maybe subconsciously I am.”

I  don’t think I put this in the book, but my first night on the road with the Knicks was in Cleveland. I was sent there as a fill-in when I was a clerk at the Post. They had this guy who was covering the team, and he just improbably quit. So they turned around and they looked at me and said, “can you get to Cleveland by tonight?” I said, “hell, yeah!” And I got on the plane and I flew to Cleveland.

It was a close game that the Knicks lost at the end. Wanting to impress my editors by showing that I could write a hard, critical New York Post kind of story, I think I second-guessed every move that Willis (then NY’s coach) made at the end of the game. So I’m real proud of myself; this shows that I’m a real Post guy. Later, I get back to the hotel and I walk into the bar…and there’s Willis! And he catches my eye and waves me over, and he’s standing there with a couple of assistant coaches and he puts his arm around me and says, “Whaddya got?”

He was the nicest man, really a sweet guy. And from the start, you feel like you’re in this strange awkward position where you’re being paid—especially by a paper as aggressive as the Post was and remains—and at the same time you’re covering someone you feel a real kinship with.

SLAM: I find those guys, the real nice guys, the toughest to cover, you know?

HA: One of the reasons I feel that sports has become mean-spirited in the coverage is because a lot of the teams, especially the current Knicks organization, have become so adversarial with the media and they block off access as much as they can. As a result, reporters don’t get to know the players on a personal basis or level like we did in the older days, and as a result it’s much easier to criticize.

SLAM: In the book you write that current media is quote-driven and antagonistic. You also say how current media get less access. Do you see a correlation there?

HA: I do. I remember back in the days when I first started, we could travel on the buses and the planes with them. I know it sounds comical to you young reporters that they actually would hold the [team] bus for us. The players would be sitting on the bus with the coaches in the front, and the travel secretarty would say “oh, who are we waiting for?” They’d say “oh, we’re waiting for Sam from the Times.” And you know Sam Goldaper, who was this old guy with a limp, would come hobbling out. It sounds comical that that could ever happen today.

If we traveled early in the morning and you wrote something in the paper that was critical, you knew damn well somebody’s wife or girlfriend had called them up early that morning and told them, “you’re not gonna believe what this a-hole wrote about you in the Post!” You had to get on the bus that morning and face them. It made you a little more, I think it was human nature, to be a little more accountable and to think twice before you wrote something.

SLAM: Naturally you would just be a little more cautious.

HA: I don’t think it made us timid. But it certainly made you think about the person you were writing about.

SLAM: It feels just a little bit easier now to publish a rumor about a guy.

HA: It feels like now, for all of us—whether we’re writing online or in a magazine or in a newspaper—we’re lobbing grenades over the wall because you have the shelter and distance from the players. You really don’t have to maintain a personal relationship with them if you don’t want to.

SLAM: Sometimes it kind of feels adversarial, even though it shouldn’t.

HA: It’s funny. I quote one or two people in the book talking about how that team spoiled everybody; they were all such big thinkers and talkers. By the same token, I don’t think people who covered that team went about it in the same kind of climate that we do today. The fact that they gave you championship rings really speaks to a completely different era of how sports were covered.