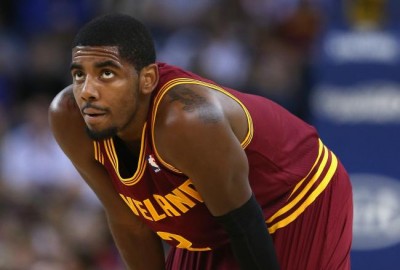 Cleveland Cavaliers head coach Byron Scott believes that second-year point guard Kyrie Irving has a chance to become the NBA’s best floor general. For him to become the best, however, he’s gotta learn from the guy currently holding the crown.

Scott is pushing Irving to give Chris Paul a call next summer, figuring it could only help push Kyrie’s game to the next level if he worked out with Paul.

Chris Paul is held as the gold standard in this league when it comes to the point guard position. His work ethic, skill, the way he’s so proficient at everything. But even then, I really believe Kyrie has a chance to be the best point guard in the league in the next, really, four to five years. Do you agree?

Byron Scott, head coach, Cleveland Cavaliers: “I think it is. I think one thing that he needs to do this summer is call Chris Paul and work out with him.”

Scott: “Because then he would learn from the best. I know he’s friends with LeBron James. I know Kevin Durant. He needs to work out with some of these guys, some of the biggest stars in this league, and see how they work. I think he’d have a different perspective on what this is all about. I think it would help him tremendously. But I do think in the next 3-4 years … He and I have talked about this. He has the possibility of being the best point guard in this league.”

While lavishing praise on the exceptional and gifted 20-year old, Byron Scott adds that Kyrie Irving needs to improve defensively, as a playmaker, and above all, on his toughness. Scott thinks Irving has a long way to go until he’s as determined and competitive as Chris Paul was at the same age and continues to be today. From ESPN:

“His leadership, I thought Chris was much more of a leader at 20-years old,” Scott said. “Right away you could tell that that’s what he was all about. Kyrie is getting to that point. He’s learning to be a leader. They have a bunch of similarities and then they have a lot of things that aren’t nowhere near the same. I’ve been lucky. I’ve coached Chris Paul, who I think is the best point guard in the league, and I’m coaching a guy who could very arguably be the best point guard in the league in the next few years. […] I called Chris the first day that I met him, he was the silent assassin with the baby face, Mr. Nice Guy, but when he gets on the court he will do whatever it takes to win a basketball game. I don’t know if Kyrie is there yet. We’ve always talked about that. Can he get there? Yeah. I still think so, yeah.”

Pick up the phone, Kyrie.